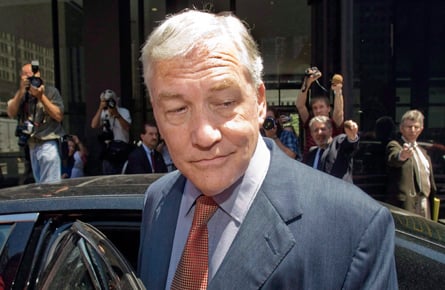 Conrad Black has scored another partial victory before the U.S. criminal justice system, but it’s not clear whether it will be enough to prevent him from going back to jail.

A U.S. appeals court on Friday reversed two counts of fraud against the former chairman of Hollinger International Inc., who was once accused of masterminding a “corporate kleptocracy” that defrauded shareholders of millions. But the court also upheld Black’s more serious obstruction of justice charge, which stemmed from security camera footage that caught him removing 13 boxes of documents from his Toronto offices while under investigation. “No reasonable jury could have acquitted Black of obstruction,” wrote Judge Richard Posner of the 7th U.S. Circuit Court of Appeals in his ruling.

As well, the court upheld a single count of fraud relating to a $600,000 payment to Black and his co-defendants as part of deal struck by Hollinger to sell newspapers to two companies in 2007.

After serving more than two years of his original six-and-a-half-year sentence, Black was released on bail from a Florida prison earlier this year when the U.S. Supreme Court ruled that a so-called “honest service” theory of fraud that government prosecutors employed in their arguments against him was defined too broadly. The surprise decision threw the former newspaper baron’s legal convictions into doubt since it wasn’t clear whether the trial jury convicted him based on the government’s honest services argument, or a more conventional fraud argument.

In his ruling, Posner instructed that Black is to be re-sentenced by the trial judge on the remaining two counts. While prosecutors could opt to retry Black on the others, Posner hinted it was unlikely. “The government may wish instead, in order to conserve its resources and wind up this protracted litigation … (to) proceed directly to re-sentencing,” he wrote.

The U.S. Justice Department said in a statement Friday that it is studying the opinion and has yet to make a decision on its next steps.

In a move that doesn’t bode well for Black’s bid to stay out of prison, Posner also wrote that trial judge Amy St. Eve could consider evidence associated with the overturned convictions when determining a sentence for the remaining fraud and obstruction convictions. The obstruction charge alone carries a six-and-a-half-year sentence, which St. Eve originally allowed Black to serve concurrently with the five years he received on the fraud counts. Black’s lawyers were no doubt hoping to have all of the fraud charges reversed, leaving him in the seemingly odd situation of being convicted of obstructing an investigation where no crimes had actually been committed.

Black, who was born in Canada, but later gave up his citizenship, is reportedly living in his Palm Beach mansion after St. Eve prohibited him from leaving the country while on bail.