Why are so many people stealing the stuff?

At first glance, the answer seems obvious and not all that unusual. On the night of September 7, 2011, a car struck the 52-year old Miami woman as she crossed the road.

It’s tragic, but pedestrian-car accidents happen all the time.

Yet something about Morrow’s death was different, and it had nothing to do with Morrow, the driver, or weather conditions.

As a local news outlet reported at the time, “A 30-block stretch of road was unlit because copper wiring had been stolen from the street lights, rendering them inoperable.”

Emergency personnel at the scene were convinced the dimly-lit street made the unfortunate difference.

“We all feel if the street lights were on, she wouldn’t be fighting for her life,” an official with the Miami Fire Rescue was quoted as saying.

Whoever stole the copper wiring that led to the death of a Miami woman is not alone. Over the last several years, the number of copper thefts has exploded.

Thieves have targeted countless items containing the metal: air conditioners, bronze statues, and wire from railway lines. A favourite among criminals are empty, foreclosed homes in the post-housing meltdown U.S. Unlike common burglars, they do not look for cash, jewellery or electronics: they break and enter because the average single-family home contains over 400 pounds of copper, according to the Copper Development Association, an industry-supported group.

The looters risk, and sometimes lose their lives in the course of heists: many have been electrocuted, often after cutting live cables in electrical substations. And, as the Morrow case illustrates, they often endanger others as well. According to the FBI:

Copper thieves are threatening US critical infrastructure by targeting electrical sub-stations, cellular towers, telephone land lines, railroads, water wells, construction sites, and vacant homes for lucrative profits. The theft of copper from these targets disrupts the flow of electricity, telecommunications, transportation, water supply, heating, and security and emergency services and presents a risk to both public safety and national security.

It’s a worldwide phenomenon: in Britain, police warned in February 2011 that, “cable theft [was] the next biggest priority after the terrorist threat.”

Canada hasn’t been spared either. Back in 2008, Toronto Police had a dedicated cop on the copper theft beat. Calgary recently established its own special unit to combat the problem. Last year, 7 people were arrested after allegedly stealing copper from a Hydro-One facility in Etobicoke. They were lucky: in another alleged attempt to steal copper from a Hydro-Quebec property a man lost his life in 2011.

The reason for these brazen thefts is rather simple: price.

As the following chart indicates, the price of copper started climbing in the early 2000s and has been at unprecedented heights ever since. It’s a fantastic opportunity for a thief: all you have to do is steal the stuff and sell it to a scrap metal dealer — and because it’s very difficult to prove which scrap was legally obtained and which was stolen, you really have to be busted in the act in order to get into trouble. 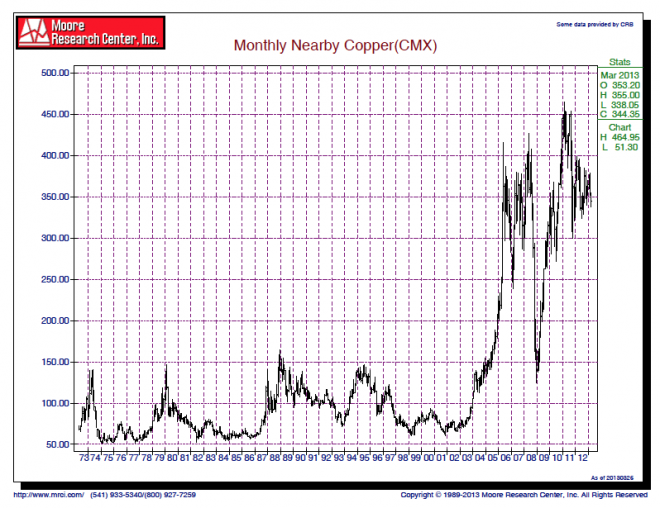 But why are copper prices so high?

Copper theft in places like the U.S. and Canada, then, would seem to be a bizarre side-effect of economic development in far-flung corners of the world.

In other words, Toronto Police can put a dedicated cop on the copper theft beat for a couple years, as they did, but they’re really playing a metallic version of whack-a-mole. It is eminently futile. As long as the price is high, there will be motivated thieves.

Last May, Maclean’s published a Bank of Canada memo on speculation in commodities obtained under Access to Information legislation. According to that document,

“In December 2010, the [London Metals Exchange] reported that a single trader held up to 90% of the metal in LME warehouses, a position worth about 3bln and equal to about 50% of the exchange-registered supply of copper in the world…Copper traded to what at the time was record highs.”

The Bank of Canada’s analyst was right, but story is more complicated still.

Huge amounts of copper have been flowing into China for years, but there’s mounting evidence that a significant part of it isn’t going into building infrastructure — it’s merely stockpiled. It’s hard to come up with precise estimates of exactly how much copper lies piled up in China but we have some hints, provided by intrepid financial analysts who’ve taken to traveling the country taking pictures of the stocked-up metal. One photo, taken by Standard Chartered and first noted by FT Alphaville, shows copper being stored in a parking lot because the warehouse was filled to the brim:

And these hoards aren’t showing up in most published estimates of worldwide inventories, the kind of statistics the Bank of Canada was looking into at the London Metals Exchange and that analysts use to gauge how much of a supply buffer exists for industrial metals.

If all you looked at was the LME stockpile, copper supply would indeed appear reasonably tight: inventories have climbed significantly as of late but still only total about 500,000 tonnes, compared to annual estimated demand of over 18 million tonnes. However, as the BBC revealed a couple of years ago, there are also large tonnages of copper that are stored in LME-approved warehouses but not reported to the exchange. Second, almost all of the metal being stored in China is not captured in the data on worldwide inventories.

According to regulatory filings by investment bank JP Morgan and Blackrock, the world’s largest money manager, there are between 2.5 and 2.8 million tonnes of copper held outside the LME warehouse system. These estimates of so-called “hidden stocks” suggest the market is very well-supplied, contrary to conventional wisdom.

In China, some reports indicate that local firms who cannot get conventional loans from banks are able to import copper and use the collateral as proceeds in order to borrow. Other observers suggest certain market players are squirreling away inventory to keep the market tight.

The market may soon be subject to yet more stockpiling: JP Morgan and Blackrock, for their part, have proposed two copper Exchange Traded Funds, securities whose sole purpose would be to buy and store physical copper for investment purposes.

Regardless of where exactly the metal is being stashed away and who is behind it, this much seems clear: the reason why Thelma Morrow died isn’t a worldwide shortage of copper — it’s a massive amount of hoarding. And until it stops, the theft will go on.