Dear Canada, being the little guy who plays by the rules doesn't always pay

“Currency war,” possibly the most exciting-sounding jargon in the economics vocabulary, is an expression coined by Brazilian Finance Minister Guido Mantega in 2010 — and it’s been used a lot lately. It refers to policies that lower a country’s exchange rate, which makes exports more competitive and could thus stimulate growth. The catch is that any boost generally comes at the expense of other countries, which see their currencies appreciate and their exports potentially losing market share. Needless to say, tinkering with one’s exchange rate invites retaliation — hence the risk of a, quote-unquote, war.

In the scenario above, Canada right now is the other country, the one on the receiving end, according to Bank of Canada Deputy Governor John Murray. “Pressures from those who break the rules fall on those who follow them, especially the little one [read: Canada among others],” he told an audience of economists and central bank officials at the Peterson Institute for International Economics in Washington D.C. today. (You can download Murray’s Powerpoint presentation here.)

Canada, according to Murray, is in the same boat as Brazil: both have seen their exchange rates appreciate substantially over the past decade. But whereas the Brazilian government has generally laid the blame on advanced economies, Murray’s finger today was pointing squarely at emerging economies, and particularly China.

Let me step back for a bit of background here. There are two ways to trigger an exchange rate depreciation: the first is to sell massive quantities of your own currency and buy loads of someone else’s (which increases the global supply of — and decreases the value — your currency, with opposite effects for the countries whose currency you’re buying). The second is to implement policies that indirectly affect the exchange rate, such as expanding the domestic money supply and keeping interest rates low — in other words, lax monetary policy. Many advanced economies have adopted the latter set of measures as a way to stimulate their economies after the financial crisis. This has irked many emerging economies — including, you guessed it, Brazil — which saw their currencies appreciate. In the case of Japan, an extraordinarily stimulative monetary policy has been described by some as a stealth attempt to tinker with the exchange rate to gain an unfair advantage.

Canada, where monetary policy is lax but less so than in the U.S., the loonie has also been climbing. Yet Murray today zeroed in on China and the first kind of tinkering: direct manipulation of exchange rates. The world, he said, is moving away from a setup where growth in advanced economies used to be fueled by domestic consumption based on borrowing and that in large, emerging markets by feeding such demand with cheap exports and investment spending. For the global economy to continue to grow, rich countries must reduce their debt burden, and developing countries must rely more on their own domestic demand and — yes — step-up imports from places like North America and Europe, which would, help them grow out of their fiscal holes. Economists have long noted that currencies of heavily indebted Western economies should be far weaker than those of export juggernauts with enormous current account surpluses. But, alas, that isn’t so, in part because countries like China are resisting swift currency appreciations and in part because they must do more to unleash the buying potential of their citizens (more on that here). Delaying this rebalancing of the world economy, said Murray, could reduce global growth by $6 trillion, or eight per cent of aggregate GDP, by 2015.

The concern then, it seems, isn’t that monetary policy in advanced economies is sending the value of their currency downward (which is where they should be headed) but that Beijing and others won’t let their currencies rise fast enough. That, in turns, creates “externalities,” said Murray, that have so far fallen on the shoulders of (relatively) little guys like Canada and Brazil: 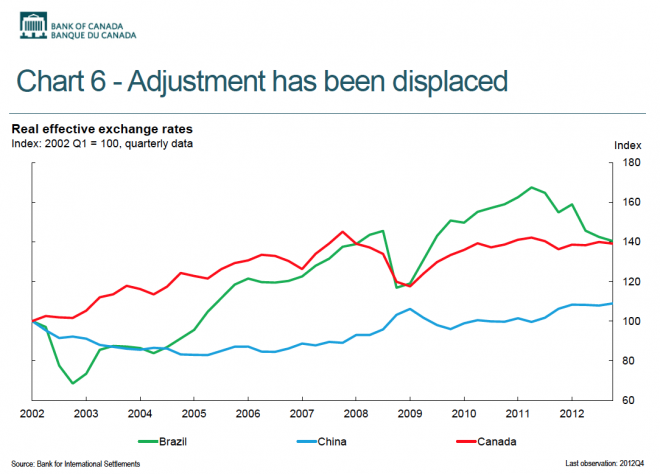