The housing market version of the Dutch Disease?

Between 2002 and 2008 Canada shed 328,000 manufacturing jobs. Why? The narrative we’ve all heard is that rising prices of oil and other commodities during the same period sucked away those jobs and channeled them into the booming resource sector. Tom Mulcair and others called this Canada’s version of the Dutch Disease, with a high loonie hollowing out our domestic goods-making industries. University of Laval economist Stephen Gordon, a regular Econowatch voice, has shown that the labour market shift has pushed up wages in both Canada’s oil fields and its factories, leaving everyone better off.

There is no question that the resource boom was a main driver behind the shrinkage in manufacturing employment. But what if there was something else at work as well?

Some economists looking at Europe think that something might be the real estate sector. Balázs Égert and Rafa? Kierzenkowski, two senior OECD economists, argue ballooning property prices in France might be part of the reason why manufacturing employment dropped — much the way it did in Canada — in the mid 2000s.

Between 2000 and 2007 the trajectory of house prices and that of production prices in the manufacturing diverged sharply, with the first soaring upwards. With business booming, the French construction sector found itself short of workers, and wages in the industry shot up. Égert and Kierzenkowski believe many of the warm bodies that filled construction jobs and helped sustain the housing rally came from the manufacturing sector. And since construction had much higher net operating profits, capital probably moved in the same direction.

Based on econometric analysis they then conclude that the resource re-allocation from export-oriented manufacturing industries into real estate has hurt France’s export performance, which has been sluggish for the past 10 years or so:

By contrast, the two economists venture, Germany’s declining house prices might have helped boost that country’s manufacturing sector and exports. And, though they caution that their findings warrant “further investigation,” they also wonder out loud whether the same trend of housing booms weighing on export growth, could be true for a number of advanced economies, including Canada.

(In case you can’t read the legend on the blurry charts: The black line is export levels; the dashed one the size of the “export market,” defined as domestic exports that would be expected if a country’s market share by volume remained constant — the reference year here is 2005; and the dotted line represents the ratio of house prices relative to manufacturing producer prices.) 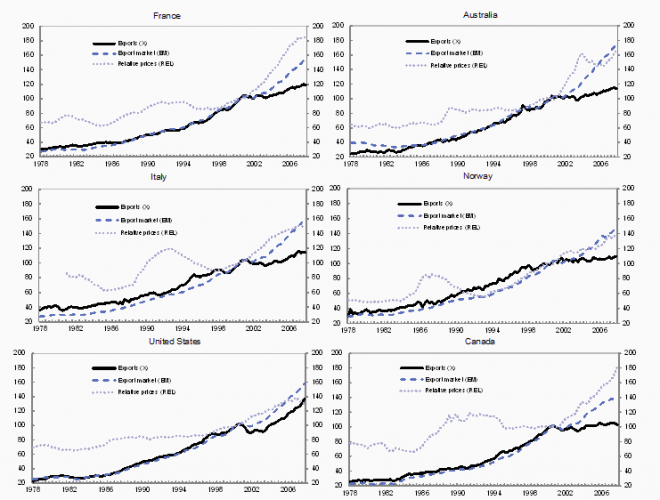 Now, the parallel between France and Canada has obvious limits. Yes, both countries experienced ballooning housing prices and slow-growing exports roughly at the same time. But Canada’s resource shuffle channeled much capital and labour toward the export-oriented resource sector.

Still, Égert and Kierzenkowski’s argument does point out that oil and gas and the mining wasn’t the only booming industry in Canada between 2002 and 2008. Housing staged a spectacular rally, and in a free-market economy capital and labour move toward sectors with higher returns. It seems obvious when you say it, but I’ve never heard anyone before mention the housing market when discussing the decline in manufacturing employment.