Are Canada's financial institutions in perfect shape? Don't bank on it

Canada's banks are under review for a potential ratings downgrade 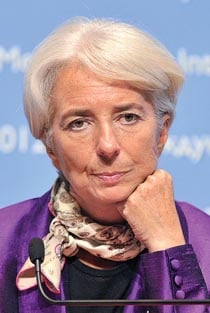 Christine Lagarde, head of the International Monetary Fund, heaped another dollop of praise on Canada’s financial system during a gala dinner speech in Toronto last week. But while the country weathered the 2008 financial crisis better than most, Canadians should remember the old investing axiom: past performance is no guarantee of future results.

Less than 24 hours after Lagarde put down her dessert fork, debt rating agency Moody’s put six of Canada’s biggest banks under review for a possible ratings downgrade, citing high consumer debt levels and a frothy housing market. They are: Bank of Montreal, Bank of Nova Scotia, Canadian Imperial Bank of Commerce, National Bank of Canada, Toronto-Dominion Bank and Quebec’s Caisse Centrale Desjardins. The only one spared was Royal Bank of Canada, which Moody’s had previously downgraded in June.

Though not in itself a cause for alarm—Canada’s banks “will continue to rank among the highest-rated banks globally,” according to Moody’s—it’s yet another piece of evidence that cracks are forming in Canada’s post-2008 economic miracle. Household debt-to-income ratios now stand at 163 per cent, higher than in the United States before its housing crash and up from 147 per cent two years ago. Finance Minister Jim Flaherty has been forced, several times, to save giddy borrowers from themselves by dialling back maximum mortgage amortization periods.

Even the banks seem to have recognized Canadians are tapped out, and are looking elsewhere for profits. RBC last week revealed plans to spend $1.4 billion to buy auto lender Ally Financial while TD said it was buying retailer Target’s credit card business. The Bank of Nova Scotia also recently purchased the online bank ING Direct for $3.1 billion.