Dubai looks to shop until the other shoe drops

Dubai, the second-largest of seven tiny emirates, is oil-rich—for now. But it's betting big that retail is the country's future. 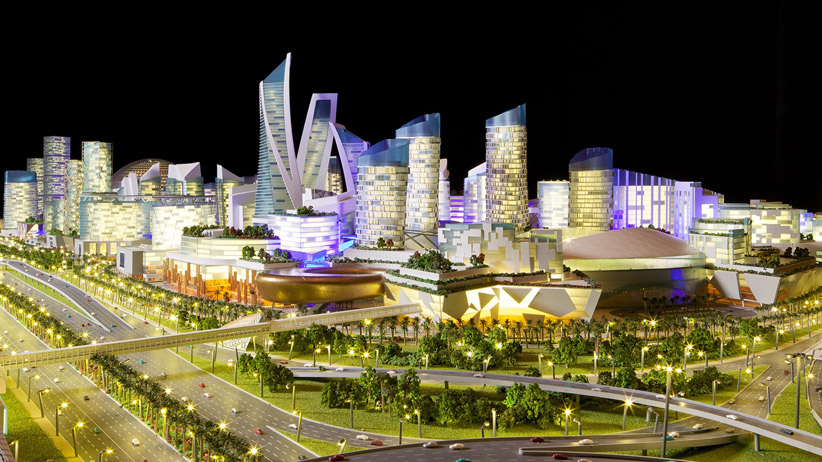 With its turreted castles, waterfalls and multitude of stores encased in a glass bubble and sprawling over an area more than twice the size of Vatican City, it’s the latest byword for excess in profligate Dubai.

The Mall of the World promises a temperature-controlled city within a city, with its creators from the state-linked Dubai Holding envisaging a vast attraction where “tourists will be able to enjoy a week-long stay without the need to leave or use a car.”

And if that seems preposterous, not to mention the embodiment of excess and environmental waste, it is worth remembering that this is a nation which has never let the trifling matter of 50° C summer heat deter it.

It marks the latest attempt by Sheikh Mohammed bin Rashid al Maktoum, the ruler of Dubai, to transform his tiny emirate from a barren desert into an international shopping metropolis and trading hub.

Despite a population of just over two million—the majority of whom are foreigners there for work—Dubai has long held aspirations to be the biggest, the best, the most lavish of the world’s shopping meccas, better than Paris, London, New York or Hong Kong. It already boasts the world’s tallest building, the biggest mall and the largest racecourse on the planet. But even for this city of superlatives, the Mall of the World is breathtaking in its ostentation.

Costing an estimated $7.4 billion and spread over 48 million sq. feet, it will include the eight-million-sq.-foot mall and seven kilometres of temperature-controlled streets under a glass roof, as well as the largest indoor theme park in the world and a 15,000-seat stadium. When it’s completed 10 years from now, it is expected to host 180 million visitors a year, with 20,000 rooms in 100 hotels.

All this in a place that is already home to the Dubai Mall—currently the world’s biggest, with 1,200 stores—and the 700-store Mall of the Emirates, which has an indoor ski slope. Other schemes on the drawing board in time for the 2020 World Expo include the City of Arabia complex and its four-million-sq.-foot Mall of Arabia, and the $66-billion Mohammed Bin Rashid City with—you guessed it—a huge mall, villas, a Universal Studios and a park.

City officials are anticipating 25 million Expo visitors, but some worry these megaprojects will turn into white elephants once the six-month event is over.

Financial analysts have questioned whether tourist and resident numbers justify the exponential construction, while the International Monetary Fund has repeatedly warned Dubai of the risks of building too much too quickly, saying: “It is time to be vigilant.”

But with Dubai’s oil reserves set to be exhausted within 20 years, tourism and shopping is its trump card. Neighbouring emirate Abu Dhabi is flush with more than 90 billion barrels and came to the rescue with an $11-billion loan when Dubai defaulted on debt repayments in 2009.

Recovery has been slow. Dubai Holding was one of the government-linked organizations hit heavily when the real estate bubble burst and has only just reached an agreement with creditors to restructure its debt.

Yet spending among consumers has soared. Market researchers from Euromonitor International say shoppers are drawn by its safety, lower prices and tax-free status. To Mac McClelland, the American president of the Luxury Marketing Council, Middle East, it’s a case of keeping up with the Joneses. “Some of it is conspicuous consumption: ‘My friend has it, therefore I must have it.’ ”

Italian Sapia Simone, 32, the manager at an interior design company, moved to Dubai from Miami four years ago, where the shopping paled by comparison. Her wardrobe is so crammed with Gucci, Prada, Versace and Miu Miu that she gets rid of her bounty in high-end flea markets to make room for more.

“It’s really dynamic in Dubai, there are lots of things to do and shopping is definitely a big attraction,” she says. “In the U.S., you don’t find thousands of brands all in one place.”

FILED UNDER: Dubai Mall of the World