When analysts talk about corporate earnings in America these days, they often cite two numbers: regular earnings and earnings without Apple. In the first quarter, the technology giant accounted for fully 35 per cent of the growth in S&P 500 earnings. The quarter before that, more than half. Strip out Apple’s earnings, in other words, and corporate America remains a scary place. Is Apple a lone bright spot amid the devastation, or could it be something more: proof that the U.S. can still be an innovation leader?

Apple, now the biggest U.S. public company ever, worth $620 billion, is a behemoth whose influence extends well beyond its ability to distort markets. Not since Ford threw the U.S. into recession in 1926—when it closed factories for several months—has a company seemed to hold such sway over the economy. Although Apple can’t flick a switch and send the country into a tailspin (its manufacturing is done in China) the company has, it claims, created 500,000 jobs in the U.S. It has helped create an entirely new gadget economy where smartphones and telecoms are the new oil fuelling growth. J.P. Morgan’s top economist said sales of Apple’s new iPhone 5 could add as much as half a percentage point to U.S. GDP growth this year.

Still, Apple’s real stranglehold is more psychological—something seen in the obsessive attention it gets from the media and investors. This fervour will be on display this week with the anticipated launch of the iPhone 5. And it is why Apple has come to be seen as a bigger symbol of overall American success. But scratch deeper and the Apple obsession is glossing over big problems. A report by the Information Technology & Innovation Foundation ranked the U.S. second from last in its global survey on improving innovation in the past decade. Incredibly, by one estimate, earnings for S&P 500 tech companies would have turned negative this year if not for Apple.

This week’s Apple product event was being hyped weeks ago as one of the biggest consumer electronics events ever. But as Research In Motion has shown, domination is no guarantee of future success. If you want to build an economy around one company, Apple is not an ideal choice. What the U.S. economy badly needs now is another 100 companies just like Apple. 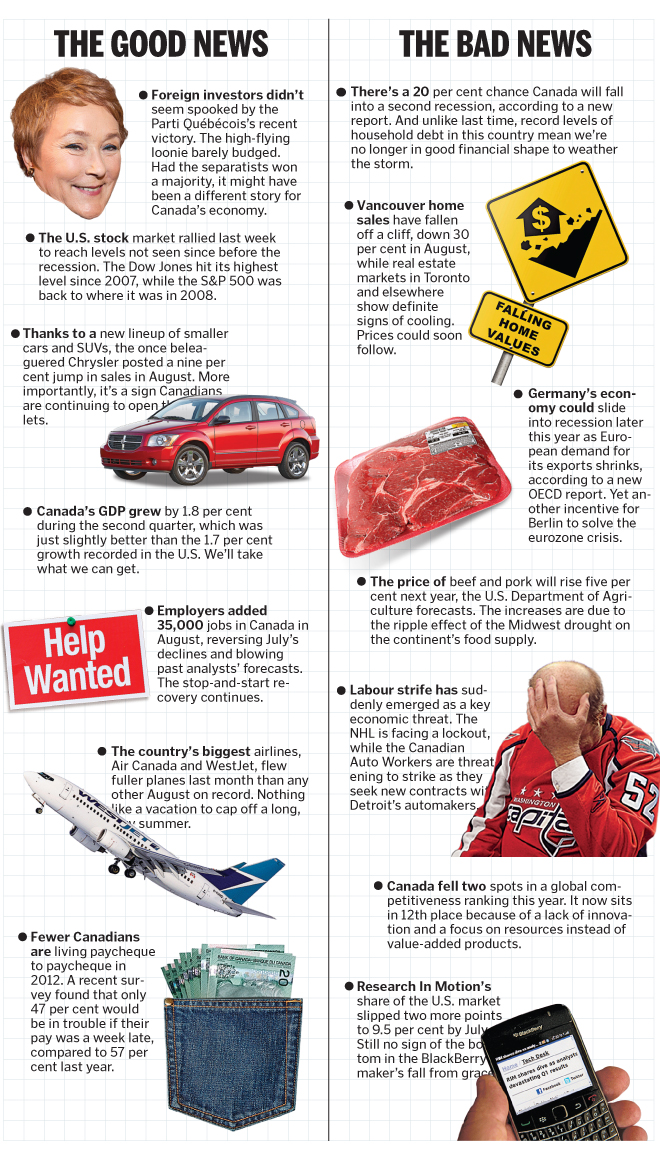 : Canadians who subscribe to the online video streaming service Netflix, up from six per cent last year, reports the CRTC.

: The lowest price of Amazon’s new Kindle. The company also unveiled a higher-end version to compete with the iPad: the Kindle Fire HD, for $499.

: The weekend box-office draw per screen from the film Oogieloves, one of Hollywood’s most epic flops.

: Sales of Samsung’s Galaxy S III smart phone in the past three months. Google reported it is activating 1.3 million Android devices a day.

: The drop in value of Mark Zuckerberg’s stake in Facebook since the IPO. He committed to not selling any of his 504 million shares for a year.

$18 billion: Expected value of shares in bailed-out insurer AIG that the U.S. government plans to sell.

Signs of the Times: Down with the ship 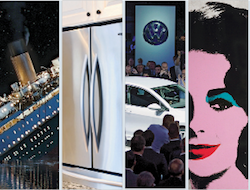 The era of stainless steel appliances—an industrial look synonymous with the U.S. real estate boom—is apparently over. Suffering from a weak U.S. housing market, makers of stoves and refrigerators now claim black glass and glossy white are the latest must-haves, according to the Wall Street Journal. Homeowners, however, would be wise to pay down their super-sized mortgages before they opt for a new kitchen.

In a case of life imitating art—or at least the computer-generated images used to make that art—the studio behind such epic disaster movies as James Cameron’s Titanic is itself at risk of sinking. Digital Domain Media Group has filed for bankruptcy protection and is searching for a buyer.

Intent on surpassing General Motors and Toyota to become the world’s largest automaker, Germany’s Volkswagen unveiled a sleeker and lighter version of the bestselling Golf (a car it has sold 30 million of since 1974). The small-car segment is the most important and competitive for today’s global automakers, and VW is betting big on the new design. It will feature a platform that the automaker plans to use on half of the cars it sells in the coming years.

The Andy Warhol Foundation for the Visual Arts plans to sell off $100 million worth of the late Warhol’s lesser-known works in an effort to raise money for its grant-making activities. While Warhol remains one of the world’s most popular and bestselling artists, some collectors have expressed serious concern that a flooding of the market will hurt prices and dilute the Warhol brand.

‘I’m not going to do in four months what my predecessors haven’t done in five or 10 years. I’m in combat mode.’

—French President François Hollande outlined his tough new austerity plans, which include $13 billion in spending cuts and over $25 billion in new taxes, including a 75 per cent tax on those earning more than $1.25 million.