The numbers and the arguments at a glance

Finance Minister Jim Flaherty announced on Monday morning that the government will freeze the EI premium rate for employees at current levels until the end of 2016.

What it means for your pockets

Finance Canada notes in its backgrounder on the topic that the rate freeze means a worker earning $48,600 — the cap for insurable earnings next year — will save $24 in 2014.

CBC, however, notes that higher income employees will still be paying higher payroll taxes next year. That’s because the insurable earnings maximum will climb to $48,600 from the current $47,400. Canadians earning the top insurable amount will be paying $22.56 more than this year. Without the rate freeze, though, they would have be paying $46.56 more.

What it means for employers

For a small business employing 10 people earning the maximum insurable amount, the rate freeze translates into a saving of $340 in 2014, Finance Canada said. (Employers generally pay 1.4 times the amount of their employees’ premiums.)

What it means for government coffers

Flaherty has stated the move will leave “$660 million in the pockets of job creators and Canadian workers in 2014 alone.” That means there will be $660 million less next year to fund expenses under the Employment Insurance Act. To put that into perspective, EI benefits paid out to unemployed Canadians in fiscal 2012 amounted to $17.65 billion, according to the Wall Street Journal.

The government says the program can withstand the revenue drop because a) the unemployment rate has been falling and fewer people are applying for benefits. and b) more people working and paying EI premiums.

Flaherty also stressed that the tax freeze will have no impact on the Harper government’s ability to balance the federal budget by 2015. That’s because the EI account “stands by itself,” the minister said. The Globe and Mail, however, notes that: “EI premiums and expenses are listed by Finance Canada as part of overall government revenues and expenses, which can blur the lines between EI funds and government funds. The Liberal government under prime minister Jean Chrétien was accused of raiding the EI fund in order to erase the deficit in the mid-1990s.”

Employment numbers have been steadily rising since the end of the recession: 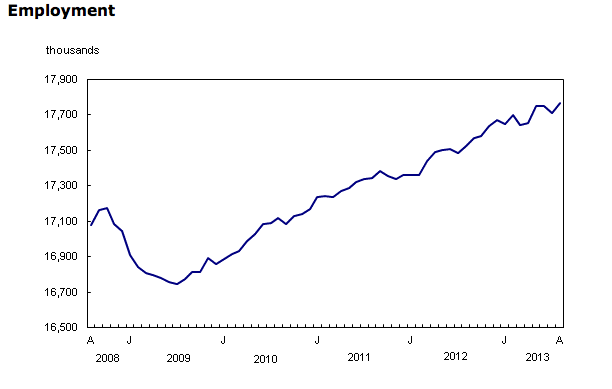 And the unemployment rate has been declining: 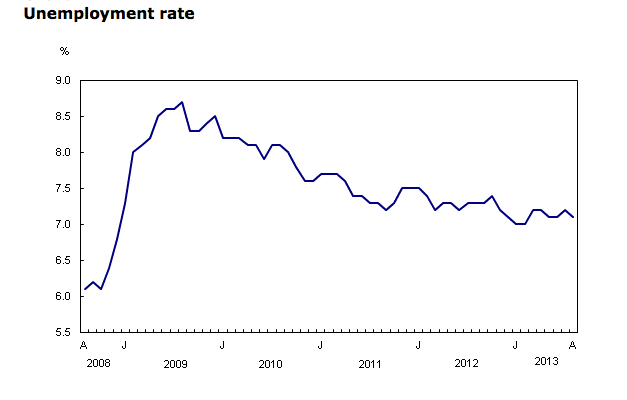 However, the pace of job creation has considerably slowed. Between February and August, the economy produced an average of 12,000 new jobs per month, less than half the 29,000 average of the previous six-month period.

Also, while the labour market churned out 59,000 jobs in August, most of those were part-time gigs, Statistics Canada said last week.

The the Canadian Federation of Independent Business is thrilled. The United Steelworkers union much less so. They attribute the reduced number of claimants to Ottawa’s recent limitations on EI eligibility rather than improved job growth.