Encyclopedia of the oil crash: B is for Bakken

...and banks, barrels, bitumen, boom, and Brent crude. View this and more in our encyclopedia of the oil crash 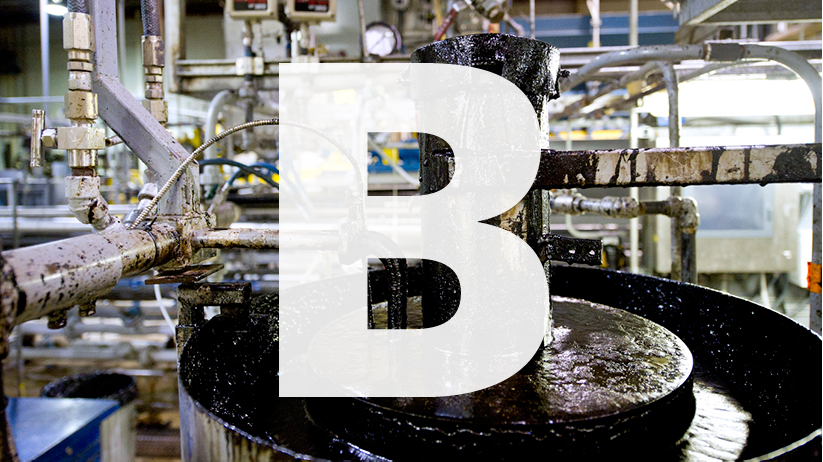 Technological advancements and soaring energy prices transformed a geological curiosity—the Athabasca tar sands in Alberta—into the epicentre of the world’s third-largest crude oil reserves. But North Dakota was handed an even more profitable windfall, thanks to the vast Bakken shale formation, which stretches into Montana and even southern Saskatchewan. Due to new horizontal drilling methods and advancements in hydraulic fracturing, oil companies are now able to profitably extract the oil from the Bakken’s source rock—a feat long deemed not worth it. In 1995, for example, the U.S. Geological Survey estimated there were just 151 million recoverable barrels in the Bakken. Today, the number has soared as high as 15 billion, making it one of the world’s largest oil “discoveries” in the past 40 years. Even better, the oil that’s sucked out of the shale is extremely light and sweet, unlike oil sands crude, which must be upgraded before it can be shipped to refineries. And it’s generally cheaper to extract, with a break-even price on most projects around US$65 a barrel, compared to closer to $80 for the oil sands.

The result has been an oil boom that’s driven U.S. oil production to its highest level since 1972 and revived talk of U.S. energy independence. Drilling rigs now dot the state and Williston, N.D., has emerged as America’s new boomtown, complete with crowded “man camps,” raucous strip clubs and rents higher than San Francisco’s.

In addition to contributing to a worldwide glut, all the oil flowing from the Bakken created a unique problem for Alberta’s oil sands operators: a pipeline-capacity crunch that led many producers, in both Canada and the U.S., to turn to railcars to move their product. The extra production also swamped key pipeline transfer points such as Cushing, Okla., where U.S. oil happens to be priced. That created a bizarre situation, where Canadian oil producers were receiving billions less than the going world rate, prompting an industry push to build new pipelines connecting Alberta to ports on the east and west coasts.

The question for Bakken oil companies now is the same one facing Alberta producers: Will the plunge in oil prices bring an end to the party? Already, some are speculating that drilling activity in the Bakken will be curtailed, and the industry is bracing for layoffs. Chris Sorensen

Canadian banks, hailed only a few years ago for their resilience during the financial crisis, are taking a beating, as investors gauge how much exposure they have to the oil sector. (See: Short Canada under ‘S.’) Each of the Big Six has varying sizes of oil and gas loans on its books, but those with the highest exposure relative to their overall lending portfolios are the National Bank of Canada and Scotiabank. If oil stays above $40, earnings will take a hit, but the shock can be absorbed, says Peter Routledge, managing director of equity research at National Bank Financial. At this very moment, banks are stress-testing their loans, but many loans to Alberta companies were already priced with oil volatility in mind, he says. 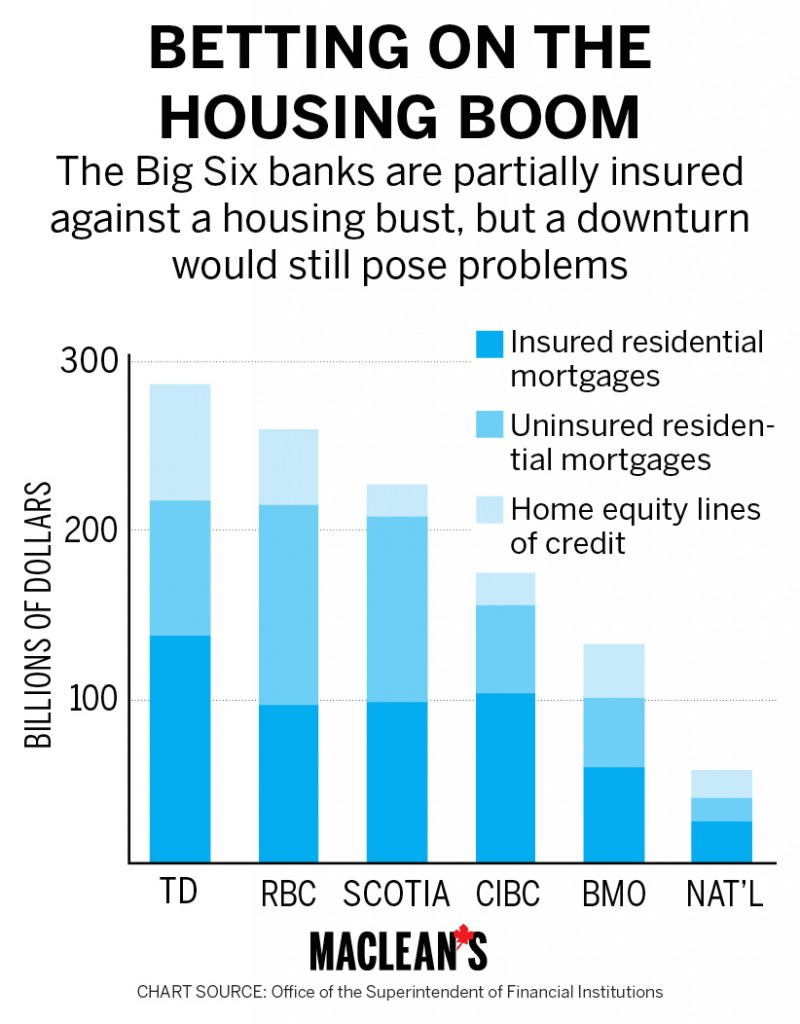 The far bigger vulnerability for banks is their exposure to another volatile sector: Canadian households. In 1987, only half of Canadian charter-bank loans went to households. Now, that number is 83 per cent, with the Big Six having extended more than $1.1 trillion in mortgages and home equity lines of credit to Canadians. “It’s the households, stupid,” says Routledge. “If it’s just contained to oil prices, we will have a period where house prices fall, but the losses from defaults will be absorbed quite handily by the financial system. If we have a recession in Canada, or even just a broad-based national correction in home prices, we’ll notice; there will be more credit losses across the system.” That would be bad for the banks, but also taxpayers: Through the Canada Mortgage and Housing Corporation and other insurers, the government has backstopped roughly 45 per cent of residential mortgages to Canadians. The low cost of debt will help to cushion that blow, but it will still be painful for the banks—as will seeing their reputations as international banking superstars shattered. Sarah Barmak

Deniene Kristensen has worked almost everywhere in the oil industry, from human resources for Koch Oil to marketing for Crescent Point Energy. During her decades of experience, she’s bought oil by the barrel and shipped oil by the barrel. But there’s one thing she hasn’t seen: raw field oil moved in an actual barrel. “Once tanker trucks came along, the real barrel died out,” she notes. “Pure economies of scale.”

So what can people do with all those old oil barrels? Here are some DIY ideas—some practical, others a bit extreme:

Cook: It won’t have nearly as many knobs as the high-priced Weber, but there’s still plenty of grilling potential in converting a steel barrel into a barbecue—or even a smoker.

Make art: The Mastaba is a proposed $340-million flat-top pyramid by artists Christo and Jeanne-Claude to be constructed in the United Arab Emirates out of 410,000 multicoloured oil barrels and reaching 150 m in height.

Music: Any tourist who has been to the Caribbean has likely heard the sweet sound of the steel pan. Created in the 1930s from objects such as steel oil drums, the steel pan is the national instrument of Trinidad and Tobago.

Transportation: In 2009, Chinese media reported that amateur inventor Tao Xiangli built a functional submarine from steel oil barrels. It even had its own periscope.  Aaron Hutchins (Photo: Wolfgang Volz)

The oil sands, or tar sands, get their name from the type of oil found in northern Alberta, and the geologic material that surrounds it. The “oil” is actually bitumen, a gooey, tar-like hydrocarbon that flows like molasses and is “as hard as a hockey puck” at 11° C (See: Viscosity). Near Fort McMurray, the bitumen happens to be found coating tiny, individual granules of sand in huge deposits. Local First Nations once mixed the asphalt-like substance with spruce gum to waterproof their canoes.

Bitumen is recovered from the oil sands in two ways, both of which are far more expensive and laborious than drilling conventional crude. For deposits closer to the surface, giant shovelling machines are used to dig huge open-pit mines. The bitumen-coated earth is loaded on 400-tonne dump trucks and hauled to an extraction facility, where it’s mixed with large volumes of water to create a slurry with a thin skin of bitumen floating on the surface. Next, the bitumen is sent to an upgrader, where it’s physically and chemically transformed into synthetic crude, which can be used by refiners to make gasoline and other petroleum products.

The second way to recover bitumen is used for deeper reserves. The most common technique, known as steam-assisted gravity drainage, or SAGD, involves drilling a set of two L-shaped wells under the earth, with one used to pump steam into the rock and the other used to capture the liquefied bitumen that seeps out.

It is more of a manufacturing process than a drilling one, which is why oil prices in excess of $80 a barrel are usually seen as necessary to make the oil sands commercially viable. Separating bitumen from the earth also requires huge amounts of energy to make steam and run the other equipment, giving oil sands crude a carbon footprint that’s about 12 per cent bigger than that of conventional crude. Chris Sorensen 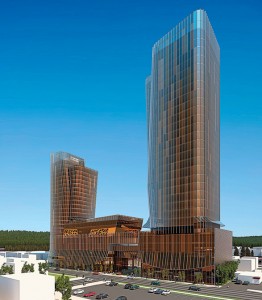 In the last decade, Fort McMurray’s population has more than doubled, and that doesn’t even take into account the 40,000-plus oil hands who reside in “camps” on the outskirts of town. Detached homes have been selling for more than a million dollars, a new $258-million airport terminal was stuffed to capacity as soon as it opened last June, and the local Tim Hortons has had to recruit temporary foreign workers to keep the coffee flowing. But the surest sign of the boom might be something that hasn’t yet—and now may never—materialize: the Golden Buffalo Centre. Plans for the $350-million downtown complex call for a 24-storey, four-star hotel and a 22-floor office tower—the tallest in the city—built atop a five-level mall and a 516-space underground garage. City officials are still working on the permits, but they might want to look into something called the skyscraper index first. The theory, first put forward by a property analyst in the late 1990s, posits that record-breaking buildings are harbingers of downturns, and only get proposed when the economy is on the verge of running out of gas. Jonathon Gatehouse (Photo: The Golden Buffalo Center)

Brent crude is a grade of light (meaning low-density), sweet (meaning low-sulphur) crude drawn from oil fields in the North Sea that is used to price oil coming from Europe, parts of Africa and even Asia. It’s therefore considered a global benchmark. Why “Brent?” Partly because it’s an acronym for the layers of an oil field. But Royal Dutch Shell also used to name its oil fields after birds, in this case, the brent goose. Chris Sorensen

FILED UNDER: A to Z of the oil crash