Encyclopedia of the oil crash: S is for Suncor

...and short Canada, Steyer, stock market, supercycle, and superpower. View this and more in our encyclopedia of the oil crash 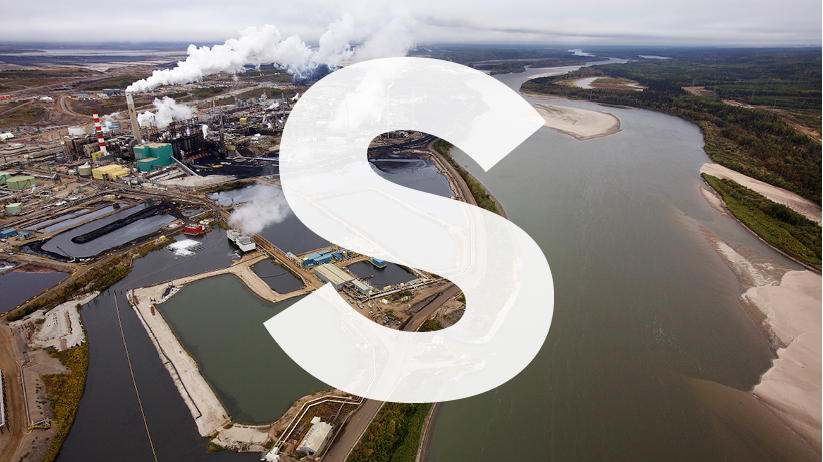 The idea of short-selling Canadians stocks (a bet that their price will fall) gained steam in 2013 as the Teflon started to wear off the economy. The brief phenomenon was dubbed “the Great White Short,” and then-finance minister Jim Flaherty wished the short-sellers “bad luck” with their strategy. According to the most recent data, “that thesis is coming back into vogue,” says National Bank Financial analyst Peter Routledge. As the price of oil fell sharply in December, short-selling Canadian banks once again became a popular tactic among U.S investors.

One San Francisco hedge fund manager, Vijai Mohan, who, in 2013, bet 95 per cent of his investors’ assets on the possibility that Canada’s banks and the loonie were in for pain, says his views haven’t changed. Since November, the average Canadian bank stock has dropped 6.5 per cent. With the Bank of Canada’s surprise rate cut sending stocks higher, the wave of short-selling may have run its course for now. The sentiment that Canada’s economy is in trouble, however, remains widely held. Sarah Barmak

When the California billionaire left his hedge fund in 2012 and devoted himself to politics and environmental causes, he went big. His lavish support for candidates who supported curbing greenhouse-gas emissions and opposed the Keystone XL pipeline made Steyer, 57, the biggest individual campaign contributor in the 2014 U.S. elections. 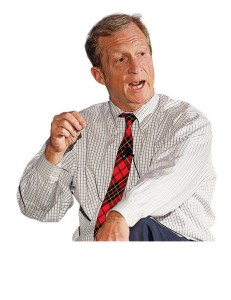 That was no small feat at a time when billionaire donors were reshaping U.S. politics after court decisions swept away a variety of restrictions on campaign financing. Often described as a rival to the conservative oil-billionaire Koch brothers, who oppose climate policies such as cap-and-trade, Steyer spent $74 million of his own money to back hand-picked Democrats in tough races ahead of the November elections. Most of his money was funnelled through a political action committee he created in 2013 called NextGen Climate Action. The group pledged to support members of Congress “who are now being threatened with political attacks because they had the courage to stand up for our children by opposing the Keystone XL pipeline.”

Steyer focused his spending on Democratic candidates in seven states: governors’ races in Florida, Colorado and Pennsylvania, and Senate races in Iowa, Michigan, New Hampshire and Colorado. However, four of his seven targets lost in a year when Republicans grew their majority in the House and took control of the Senate. NextGen had openly considered attacking a high-profile Democratic supporter of Keystone XL pipeline, Mary Landrieu of Louisiana, a major Keystone booster, but dropped the idea. Landrieu eventually lost her seat to a Republican challenger in a runoff election.

A long-time Democratic donor and energetic fundraiser for President Barack Obama’s election, Steyer had made much of his fortune by investing in oil and fossil fuel industries. But he turned to environmental causes in 2012. He has pledged to give away most of his wealth during his lifetime and has given tens of millions of dollars to energy research at universities, including Stanford and Yale. Luiza Ch. Savage

In January 2011, global investors couldn’t get enough of the Canadian growth story. U.S. investment firms set up operations here to meet demand. (At an event to promote his new Toronto office, Connecticut money manager Peter Schiff, famous for his dour view of the U.S. economy, summed up what he was telling clients about the country: “Canada has a lot of what China needs.”) A book with the promising title Go Canada: The Coming Boom in the Toronto Stock Market and How to Profit From It had hit shelves a month earlier. Its author, Bob Haber, predicted the S&P/TSX Composite Index would double to 30,000 points within 10 years.

We’ve still got five years to get there, but it doesn’t look promising. Over the last five years, the U.S. S&P 500 stock index has climbed nearly 90 per cent, while the S&P/TSX has managed just 30 per cent. In fact, the Canadian stock market is only four per cent higher than it was in March 2011. The oil crash has hammered Canadian stocks. But, even before the oil rout began last June, slumping resource prices dragged down the TSX. It’s well-known that Canada’s stock market is overly reliant on three sectors—financials, energy and raw materials account for roughly two-thirds of the main benchmark index—and, with worries growing about the housing market, even the banks are caught in the downdraft.

The world has started to get the message loud and clear. Foreign investment in Canadian equities was cut in half in November (the most recent month for which Statistics Canada has released figures), falling to $4.3 billion from $9.5 billion in October. It was the first decline in 15 months. For now, at least, the golden era of Canada’s stock market outperformance is behind us. Jason Kirby

One way to realize just how mammoth Alberta’s oil sands have become is to look at the giant of the industry, Suncor, and see how far it’s come since it was spun off from its parent company, Sunoco, in the mid-1990s. Like other producers in the oil patch, slumping prices have hit the company hard: In mid-January, it cut its 2015 spending budget by $1 billion and announced 1,000 layoffs. 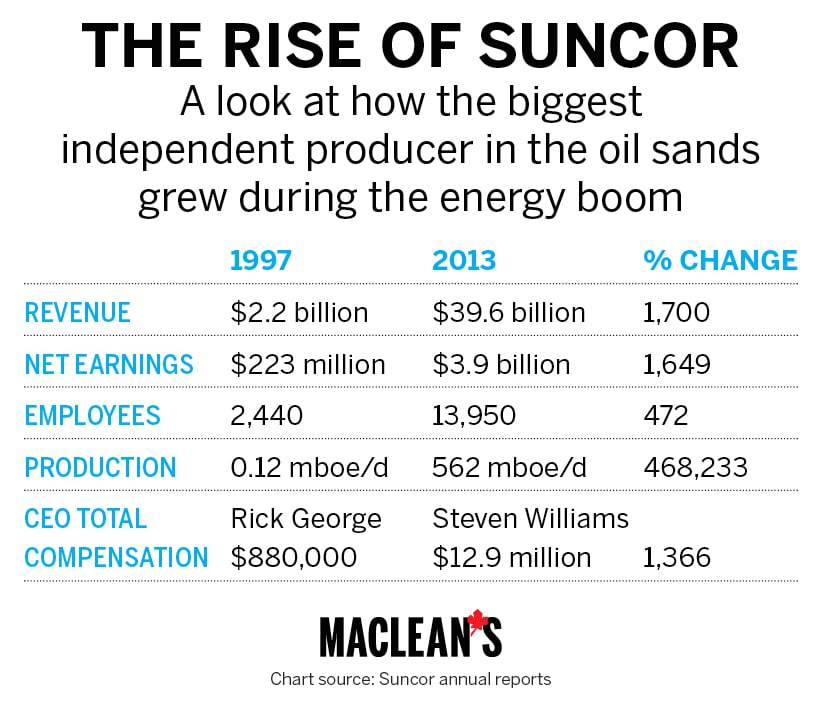 For all the attention that accompanies daily swings in oil prices, the more important question is what stage they are at in the supercycle. Over the long term, oil, gas, metals and agricultural commodities have regularly followed drawn-out cycles of booms and busts. The upturns last anywhere from 10 to 30 years—as producers scramble to meet rising demand—while the downturns can take decades to play out as oversupply saturates markets. Many believe the current supercycle began in the late 1990s to early 2000s, and that it peaked sometime between 2011 and 2013. If so, it could be many years before Canada can count on resources to power its economy once again. Jason Kirby

Stephen Harper had been Prime Minister for just more than five months when he addressed the Canada-U.K. Chamber of Commerce in London on July 14, 2006. His speech that day measures 2,980 words, but it was a single, three-word turn of phrase that made headlines back at home: emerging energy superpower. “One of the primary targets for British investors has been our booming energy sector,” he said. “They have recognized Canada’s emergence as a global energy powerhouse, the emerging energy superpower our government intends to build. It’s no exaggeration.” The phrase was not entirely new; it had been bandied about in the media in the months leading up to the London event, with the first complete use of the three words together appearing six months earlier in a newspaper column by a research analyst from the environmental not-for-profit Pembina Institute. But it soon became a regular phrase in the government’s lexicon. (A green version later appeared in the Conservative party’s 2008 election platform, touting Canada as a “clean energy superpower.” The most recent politician to use the phrase in the House of Commons wasn’t a Tory, though, but New Democrat MP Nathan Cullen, whose riding would include the proposed Northern Gateway pipeline. “In 2006, the current Prime Minister declared for all the world to hear that Canada would become an energy superpower,” said Cullen. “Well, all these years on, how are they doing? Every major energy transportation project is mired in controversy.” Aaron Wherry

FILED UNDER: A to Z of the oil crash stock market Suncor supercycle Tom Steyer