Europe on growth: All together now?

Suddenly, everyone wants to change the tune from 'austerity' to 'growth' 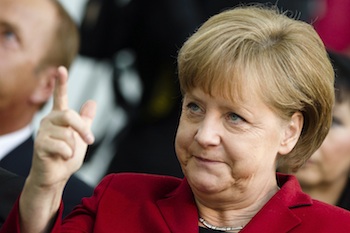 Last week, we wondered whether Chancellor Angela Merkel and other German officials were too stubborn to notice that their push for austerity is choking Europe’s economy. There’s a chance they aren’t.

On Wednesday, European Central Bank President Mario Draghi called for a European “growth compact,” acknowledging that fiscal austerity is “starting to reverberate its contractionary effects.” Merkel agreed with Draghi, though she immediately specified what type of growth she would–or rather wouldn’t–like to see:

“In Europe, we are called to overcome the sovereign debt crisis and the consequences of the international financial and economic crisis. On one hand, that can be done with a sustainable fiscal policy… but that is a necessary but not sufficient method of overcoming the crisis because we also need growth. We need growth in the form of sustainable initiatives, not stimulus programmes which would increase debt, but growth in the form of structural reforms.”

As vague as that sounds, it means Germany is willing to talk about the “growth compact,” but it won’t be an easy conversation.

Still, as of this week, everyone else in Europe seems eager to change the tune from “austerity” to “growth.” Socialist French presidential contender François Hollande claims he inspired this European Spring of sorts. By winning the first round of France’s presidential election against incumbent Nicolas Sarkozy, who placed second, he says he “liberated” European leaders into talking openly about the need for growth.

There’s some truth to that. The prospect of Hollande becoming France’s next president has undoubtedly had an effect on the general mood in Europe. For one, the “Merkozy” alliance for austerity will no longer be if Hollande wins the May 6 runoff ballot. But the pro-growth camp was already pretty big and loud, with some of the world’s top economists joining Europeans like Draghi and Italian Prime Minister Mario Monti in warning that belt-tightening alone can’t fix the continent’s fiscal crisis.

And then there are the naked numbers, showing that the strategy European governments have implemented so far isn’t working: Spain, which announced this week it is entering a recession, posted its worst unemployment numbers in 19 years today–at 24.4 per cent. Analysts are forecasting the EU this year will crawl forward by a meagre 0.5 per cent.

If this week doesn’t wake up Germany to the need for some flexibility, one has to wonder what will.