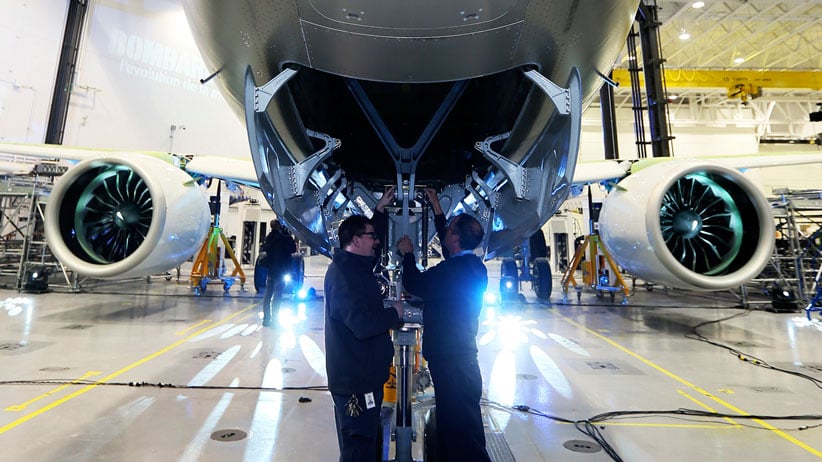 MIRABEL, Que. — Despite his conspicuous absence, the future of Bombardier’s executive chairman cast a shadow over the company’s celebration marking the certification of its CSeries passenger jet.

A published report suggested Pierre Beaudoin, grandson of the company’s founder, will step down in the new year.

“I don’t know where this is coming from,” Alain Bellemare, who replaced Beaudoin as CEO in February, told reporters Friday after certification of the CS100 was announced.

The family’s control of the company through its multiple voting shares has long been criticized by some investors despite the retort that the continued involvement allows the company to withstand short-term challenges.

Pierre and his father Laurent, who preceded him as chairman and CEO, have shifted some of their attention to other investments lately, including recreation vehicle company BRP (TSX:DOO) and a cement plant under development in Gaspe.

Walter Spracklin of RBC Capital Markets says investors would welcome the departure of a family member as executive chairman — even if it is not clear who would replace him.

“We believe the market would view the appointment of an independent chair as a positive in terms of further improved corporate governance ? and possibly signalling further independence by the CEO as it relates to the family,” he wrote in a report. Bombardier’s shares — which have plummeted 85 per cent since mid-2011 — gained almost 15 per cent in Friday afternoon trading on the Toronto Stock Exchange.

The uncertainty surrounding Bombardier’s (TSX:BBD.B) top leadership comes as the federal government gave the green light to the largest plane ever built in Canada.

“This is a big day,” Transport Minister Marc Garneau said during a news conference at the aircraft’s assembly facility in Mirabel, north of Montreal. “Major projects like the certification Bombardier’s CSeries don’t come along very often.”

The go-ahead comes more than a decade after Bombardier first unveiled plans to build a plane that would compete directly with the smaller airliners from Boeing and Airbus.

Garneau said certification sends a strong signal to investors and potential customers. However, he declined to say when Ottawa will decide on a request from Bombardier to match the Quebec government’s US$1 billion financial investment in the CSeries.

“The investment of Quebec has clearly helped us regain traction in the marketplace, creating positive momentum with airline customers and I hope we will be able to get one more partner to give it even more juice moving forward,” he told reporters.

A series of challenges — including an engine failure that grounded testing for more than three months — prompted Bombardier to delay the CSeries’ entry into service by Lufthansa-owned Swiss Airlines until the first half of 2016.

The larger CS300, with up to 160 seats, is scheduled to be certified and delivered to launch customer AirBaltic in September.

The company has high hopes that the plane’s use of lightweight materials and fuel-efficient Pratt & Whitney engines will make it a long-term winner, especially in growing markets like China.

But the plane has been stuck at just 243 firm orders for more than a year. Some of the 603 commitments for the plane are in serious doubt. This includes Porter Airlines, which placed a conditional order before Garneau rejected required changes at a small island airport near downtown Toronto.