A peek at the blueprints 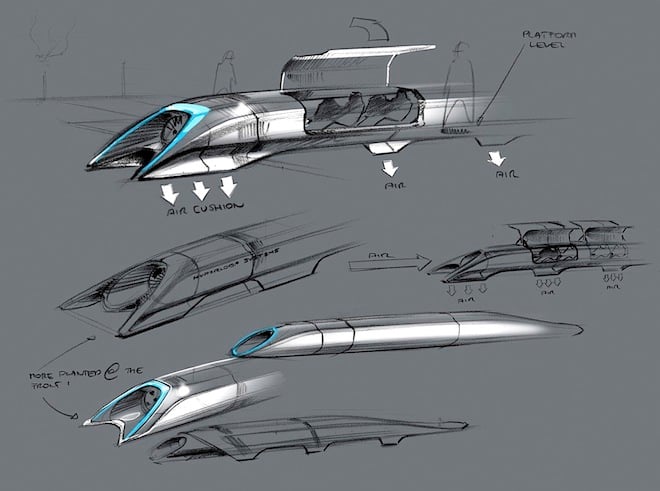 After months of speculation, tech billionaire Elon Musk has revealed a blueprint for Hyperloop, rapid transit that he says could zip people from San Francisco to Los Angeles in half an hour.

Seated in aluminum pods, passengers would be transported along an elevated steel tube at speeds of up to 800 miles per hour. Giant, battery-powered fans mounted to the pods would push air from the front to the rear of the ride.

“It’s like getting a ride on Space Mountain at Disneyland,” Musk, founder and CEO of Tesla Motors Inc. and SpaceX told Bloomberg Businessweek.

Here are five cool facts about the Hyperloop:

1. Musk will build a prototype.

Though Musk has said he has no plans to construct the Hyperloop, he changed his tune on Monday. “I would like to see it come to fruition and I think it might help if I do a demonstration,” he said. But since the project is “not a high priority,” it’ll likely be three to four years before that happens and up to 10 years before a full-scale version is operational.

That’s a fraction of the cost of California’s planned high-speed rail system.

3. It will transport cars and people.

“You just drive on, and the pod departs,” said Musk in the Bloomberg Businessweek interview. (Previously, it was assumed capsules only be for people.)

4. It will be solar powered.

Solar panels on top of the tube will provide more than enough energy to operate the Hyperloop, Musk says. Excess energy will be stored in battery packs to allow pods to run at night.

5. The ride will be smooth and safe.

Musk said passengers will feel little other than start-up acceleration. “It would feel extremely smooth, like you were riding on a cushion of air,” he said. Shock absorbers placed at intervals along the tube will help mitigate the earthquake risk, he said. “It’s extremely difficult to crash,” he added, noting that it can’t derail like a train or “fall out of the sky.”