The perils of a next-generation jet

The 787 Dreamliner and Airbus A380 should be a passenger’s dream, at least when they're working

A Japan Airlines flight to Narita circled back to Boston last week after a fuel-pump light blinked in the Boeing 787’s cockpit. It wasn’t an emergency landing. Just a precaution. Nevertheless, the incident shaved a dollar off Boeing’s stock price, now around $105.

Three years late and billions over budget, the 787 “Dreamliner” is Boeing’s big gamble on the future of aviation, and the company’s future success is riding on its performance. It’s not often that all-new commercial jets are redesigned from the ground up (most jets flying today were originally developed in the 1960s), so when Boeing and European rival Airbus embarked on so-called “clean sheet” projects in the early 2000s, the stakes could not have been higher. Rival Airbus opted for a bigger-is-better approach with its double-decker A380, which can carry up to 853 people and can include features like personal suites with double beds, bars and showers. By contrast, Boeing bet—correctly, judging by the more than 800 planes on order— that airlines were more interested in smaller, more fuel-efficient jets that could carry about 250 passengers non-stop to far-flung airports around the world. (The 787 promises to burn 20 per cent less fuel than a standard airliner of the same size.) It also promised passengers a better ride—with more comfortable cabin pressure, mood-altering LED lighting and bigger windows that can be darkened with the push of a button.

But few people have so far had the opportunity to enjoy the 787’s in-flight experience. A series of high-profile incidents—electrical problems, fuel leaks and on-board fires—prompted regulators to take the rare step of grounding the entire 787 fleet of 50 planes earlier this year because of concerns about overheating lithium ion batteries. The 787 was once again cleared for takeoff in May, but new concerns were raised after a 787 operated by Ethiopian Airlines caught fire at London’s Heathrow International Airport two weeks ago. So far, investigators say there is no need to ground the planes again, having traced the problem to an emergency transmitter beacon. Boeing, for its part, said it is working with U.K. investigators and is “confident the 787 is safe and we stand behind its overall integrity.”

The 787 is a technological wonder, built of lightweight composite parts and relying on electricity (stored in the problematic batteries) to power many in-flight systems. But it’s also an example of the perils of building a next-generation jet. The experience was made even more difficult by shareholders’ demand to see the development process accomplished quickly and cheaply. Rival Airbus faced similar troubles with the A380, while Bombardier is desperately trying to avoid a similar fate with its all-new CSeries plane.

Boeing’s headaches began well before the 787’s first commercial flight in 2011. The program suffered repeated delays thanks to Boeing’s efforts to try to save money by outsourcing much of the plane’s development. “Such dramatic shifts from convention involve significant potential for encountering risks throughout the process,” concluded a 2009 study by researchers from the University of California at Los Angeles. Similarly, one of the biggest production delays for the Airbus A380 stemmed from incompatibilities in the design software that Airbus teams in different European countries used to build the giant plane’s various components. Only when the first A380 was being assembled in France did they discover some of the 100,000 wires were too short to be properly connected. As a result, the first A380 was delivered to Singapore Airlines in 2007, a full two years behind schedule. Since then, the A380 has experienced several issues, including ongoing wiring problems and, notably, metal in its wing brackets that is prone to cracking.

After watching the missteps of Boeing and Airbus, Montreal-based Bombardier is going out of its way to do things differently with its CSeries, which will have between 100 to 149 seats and put Bombardier in direct competition with Boeing and Airbus for the first time. It took the rare and more expensive step of creating a full-scale mock-up of the plane at its Montreal test facility, alongside several other test rigs, in the hopes of solving any production or other problems early on. “We call it flying the aircraft on the ground,” spokesperson Marianella de la Barrera says. Even so, the $3.4-billion program has so far been delayed twice—once last November when Bombardier pushed back the first delivery six months to June 2014, and again last month when the first test flight was delayed until this month. With firm orders for just 177 planes, Robert Kokonis, the president of Toronto consulting firm AirTrav Inc., says airlines are taking a wait-and-see approach.

As for the 787, “good people can debate what’s going on. But there’s no casualties,” says consultant Richard Aboulafia of Virginia’s Teal Group. Some may assume Boeing regrets the 787’s “Dreamliner” moniker, but it’s too soon to call it a nightmare, either. 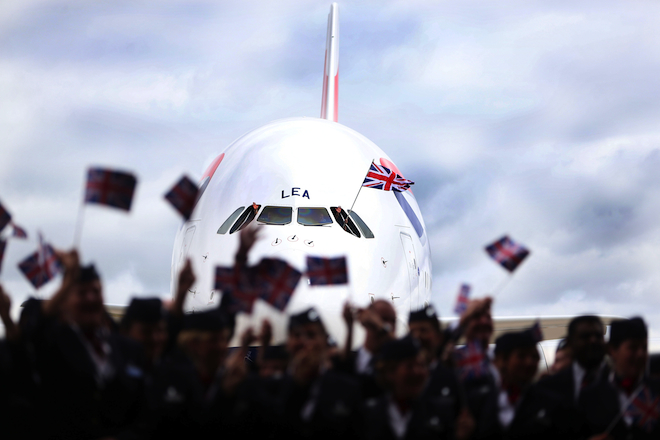 British Airways staff celebrate the launch of the A380, the world's largest passenger airliner.