For the Running Room, the shift to digital retail is a marathon, not a sprint 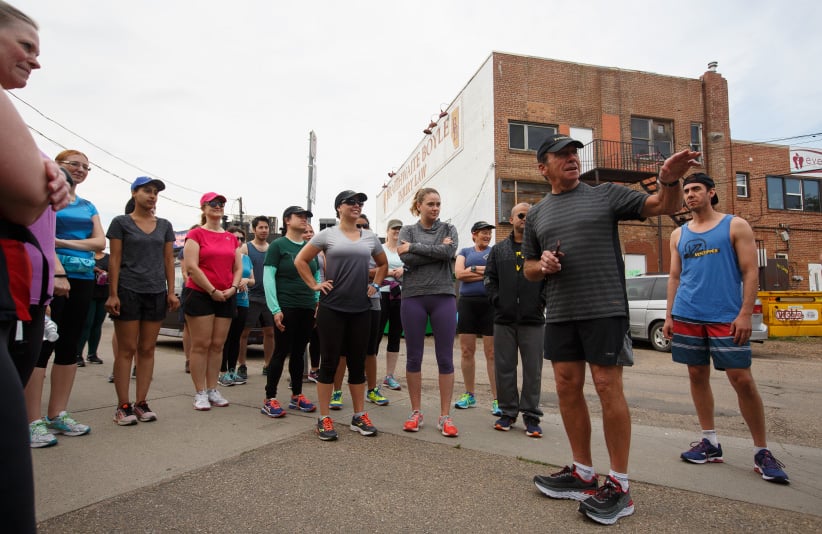 The Running Room president and founder John Stanton sets up a drill for a running group in Edmonton, Alberta on Sunday, July 30, 2017. (Photograph by Amber Bracken)

John Stanton is at home in Edmonton feeling rather pleased with himself. He squeezed in a run earlier this morning, which, even after 36 years of pounding the pavement on a daily basis, still leaves him with a sense of accomplishment. “Plus I beat the rain, so I’m feeling extra smug today,” Stanton jokes. But as far as runners go, the 69-year-old isn’t cocky at all. In fact, the founder, CEO and face of the Running Room built his company’s brand by eschewing the arrogance and elitism that once characterized the sport.

Since opening his first location—a rented room in a house in Edmonton—in 1984, Stanton has created inclusive, judgment-free spaces for runners of all fitness levels to socialize, get fit and achieve their personal goals. In the process, the Running Room has grown to 110 retail stores across Canada and the United States and earned a spot on Deloitte’s list of Canada’s Best Managed Companies. All this was accomplished by building a corporate culture aimed at making running about camaraderie rather than cutthroat competition.

“People have accused me of dumbing down running,” says Stanton, who popularized the “run for 10 minutes, walk for one” training method. “But in fact we’ve made running more attainable for people, and that’s what really matters.”

The running world has definitely become more egalitarian since Stanton began. The average time for a marathon runner has increased by 25 minutes, thanks largely to more recreational participants, according to a report that looked at marathon times for 34 million U.S. runners between 1996 and 2016.

Stanton got into running in 1981 to lose weight and quit smoking. He would sneak out in the mornings while the streets were still empty so no one would see “this short chubby guy’s” slow, laboured jog. As the pounds came off, Stanton became convinced of the power of running, and knew that others would too, if only they felt comfortable trying it. A grocery executive at the time, Stanton funnelled his business savvy into his idea of a one-stop shop for runners to learn about the sport, get trained and gear up while they were at it.

Today, the Running Room is one of Canada’s foremost authorities on running gear and advice. The company has sponsored more than 600 races and publishes a trade magazine with more than 400,000 readers. And every night of the week, hundreds of Canadians meet at Running Rooms to exercise together.

According to Stanton, his firm’s prominence and longevity is thanks to what he calls a “triple-win” approach. Whether it’s selling shoes or organizing an event, everything Running Room does has to benefit a charity, their customers and the bottom line. Today, the strategy is better known by buzzwords like social entrepreneurship or purpose-based business. “That’s one theme John Stanton tapped on without realizing,” says David Ian Gray, a sports retail analyst and founder of DIG360, who’s been following the Running Room since the late ’90s. “Now all companies are trying to inject purpose into their businesses, but it was embedded in the DNA of the Running Room from the beginning, and that was completely sincere.”

Maintaining the company’s values across 100-plus stores is not easy. Nor is ensuring that every store and training clinic has the same laid-back, friendly vibe. Bryan Smith, an area manager for Toronto, says staff are trained in the Running Room’s signature customer service style by watching their managers on the floor. “It’s very hands-on, very engaged,” says Smith. In-store managers help set the expectations, and also function as a safety net in case a customer has a question the sales associate can’t answer. “The last thing you want is a salesperson to leave their customer to go make a call,” he says.

Managers are also in near constant contact with upper management. They prepare brief reports on every clinic, run club and store visit, and submit the documents online to executive decision-makers. “With so many stores, and certain standards for service, you need a way to ensure consistency,” says Smith. “This dialogue helps [the company] know that folks are delivering.”

While their commitment to customer satisfaction gives them an edge, the Running Room is not immune to the perils of a turbulent retail market. Stanton says the company is “cautiously expanding,” but they’ve also recently closed some underperforming shops. With apparel and equipment sales increasingly happening online, the Running Room, like its competitors, will be forced to adapt. But in this changing market, the company’s bricks-and-mortar locations might prove its biggest advantage. “I think what’s really going to help them outlast some of their competitors is the fact that they’re a socialized network where people meet up, where the need for a physical space doesn’t go away,” says Gray. “By virtue of what [Stanton] created, he’s buffered himself a little bit from the negative impact of the internet.”

Stanton may have bought himself some extra time to crack the e-commerce puzzle all traditional retailers are grappling with, but he’s long been bracing for the shift. The company has had a web presence since 1992, and it now offers online components to their training clinics, and sells roughly 20 per cent of its product through e-commerce. “It’s dramatic growth, but the lion’s share is still in-stores,” says Stanton. “That’s where that personal connection is.”