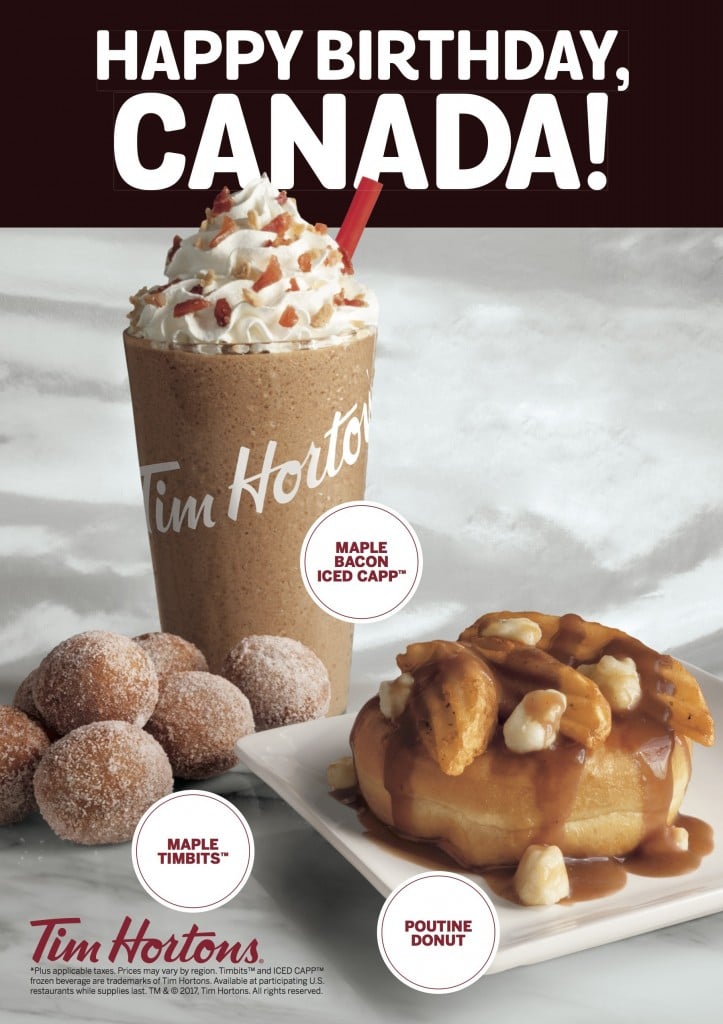 Sometimes novelty fast foods can seem less about killing a hunger than creating a buzz. You might be more likely to eat them on a dare, rather than to satisfy a craving. Perhaps more important, you might not even eat them but if you post a picture of it on Instagram the restaurant brand still wins.

Tim Hortons’ latest offering to American customers in five U.S. stores, in honour of Canada Day, is a maple doughnut smothered with potato wedges, gravy and cheese curds. You can wash down the Poutine Donut for a US$1.49, with an Iced Capp topped with whipped cream, maple flakes and bacon.

“At Tim Hortons restaurants, we’re proud of our Canadian heritage and we want to share a piece of that in the United States,” explains Felipe Athayde of Tim Hortons U.S. “Our new Canadian inspired treats are a great way for Americans to get in on the 150th celebration of their friendly neighbour next door.”

The Poutine Donut joins a line of marketing tactics that drive awareness at fast-food restaurants with innovative offerings, some of them seasonal but many of them designed mostly to shock. According to experts, the company may be less interested in having Americans actually eat the thing than having them share pictures of it on social media with their friends.

Tims and other restaurants have always used short-term special offerings to keep customers coming back for something new and test new products. But more and more, they are raising the stakes with food-as-dare propositions.

“When I was kid and McDonald’s launched McRib it seemed outrageous,” said Dave Hamilton, a Toronto-based advertising creative with Isaac Reputation Group. “I think the stakes have just kept rising from there.”

For several years, Hamilton’s previous advertising agency, Grip Ltd., had the Yum Brands account, which includes KFC, Pizza Hut and Taco Bell, all with a reputation for creative interpretations of fast-food gastronomy.

Pizza Hut regularly rolls out “innovations” like hotdogs or cheeseburgers in pizza crusts, Taco Bell has stuffed Cheetos into burritos and made chips out of chicken, while KFC fans raced to stores to get the Double Down—cheese and bacon between two pieces of chicken—when it arrived in Canada.

“Yum Brands are the masters when it comes to outrageous news-cycle innovation tactics.” And for good reason, he adds. “Sales, earned-media and social media mentions were off the charts for the Double Down craze that unfolded over a succession of years,” he said. The original Double Down arrived in Canada in 2010 and was followed by a Zinger Double Down and then a Hot Dog Double Down.

“Most chains, particularly mature ones, will experiment with dare-to-try-it products because it gets people interested in revisiting, even when there’s so much new choice out there,” he said.

But in order to get customers to try it, you have to give them a chance to try it. The one-day limited sale of the Poutine Donut would suggest that is not really the goal. (Tim Hortons declined an interview but said there are no plans to bring it to Canada.)

This is not about drawing more people in-store with the promise of fries-and-gravy covered doughnuts, this is about getting people talking about fries-and-gravy covered doughnuts, said Detlev Zwick, associate professor of marketing, Schulich School of Business at York University. It’s a stunt perfectly designed for social media, he added. “It won’t all be good, but that’s okay.”

Poutine and doughnuts as Canadiana may be trite, but it is what American’s know about Canada and the idea isn’t to create a subtle homage to Canada. Rather it is to get people—already accustomed to strange food creations—to take pictures and share them on social media. Canada’s birthday is the justification, however tenuous, for the creation.

So while the Poutine Donut may not be real product innovation, Zwick still thinks it is smart marketing.  “This is the kind of idea that translates beautifully into digital marketing,” he said.

“I would rate this quite well, I think it is a good idea. Americans would recognize poutine and doughnuts as Canadian and pictures will be very shareable. It could put them on screens across the U.S.”