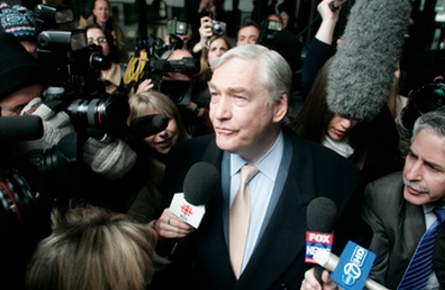 The U.S. Supreme Court has cast serious doubt on Conrad Black’s convictions on three counts of fraud and sent the case back to a lower court, which could decide to altogether clear the former press baron of fraud charges. Black’s appeal hinged on the government’s use of what’s called the “honest services” component of the U.S. fraud law to convict him. In their appeal to the top court, Black’s lawyers argued the definition of “honest services” as it applies to fraud cases was too broad to be meaningful. On Thursday, the Supreme Court announced it agreed with them.

In its ruling, the Court wrote the “honest services” statute should apply only to “schemes to defraud that involve bribes and kickbacks,” rather than all cases in which a defendant is accused of breaching an intangible promise of loyalty to a company. Most significantly for Black, by narrowing the scope of the statue, the Court removed it as a justification for his conviction on three counts of fraud since the case against his involved neither bribes nor kickbacks.

Of course, Black isn’t out of the woods yet. As the judges noted in their ruling, jurors were presented with three options with respect to the fraud charges at Black’s initial trial: they could find Black innocent; they could find Black guilty because he collected bogus fees from Hollinger for noncompetition agreements; or they could find him guilty because he shirked his duty to provide “honest services” to the company. Thursday’s ruling only knocks out the third option given to jurors—that Black was guilty of disloyalty to Hollinger—and the Supreme Court justices are leaving it up to the Court of Appeals to decide “whether the error was ultimately harmless.” In other words, the Appeals Court could still decide there was sufficient evidence upon which to convict Black even if prosecutors had never uttered the phrase “honest services.” And even if he’s cleared of fraud, Black would still have his conviction for obstruction of justice hanging over his head, though his lawyers have argued “spillover prejudice” from the inappropriate use of the “honest services” provision corrupted that charge, too, and the Supreme Court remitted the case to the Appeals Court along with the fraud charges.

Without the “honest services” theory attached to its case, though, the prosecution faces a much more stringent burden of proof, according to Scott Hutchison, a Toronto-based lawyer who’s worked on a number of white-collar crime cases. After all, Black has long defended the contentious payments, no matter how exorbitant, as money he was entitled to. “If that’s true,” Hutchison says, “there’s no fraud. Companies are allowed to structure their transactions in ways that are mutually beneficial to everyone involved. The only way it would be a fraud is if there was an act of dishonesty perpetrated against the owners of the newspapers.”

Despite the setback, at least one of those who built the case against Black doesn’t appear worried. In an online chat with Globe and Mail readers, Eric Sussman, the former lead prosecutor in Black’s case, suggested Thursday’s ruling “will have very little impact” on Black’s convictions. “One ‘theory’ of fraud is gone, but not the other,” Sussman wrote. “As for spillover [onto the obstruction of justice conviction], the Supreme Court did not opine on this issue and the Court of Appeals seemed unmoved by the argument last time.”

Still, to long-time critics of the “honest services” statute, the ruling is a significant victory—not just for Black, but for everyone. A groundswell of opposition to the provision had built up in recent years over concerns it amounted to little more than a legal safety net allowing prosecutors to press ahead with—and ultimately win—what were otherwise weak cases. Chicago-based lawyer Marc Martin, a one-time member of Black’s legal team, estimates the statute was so overused the Supreme Court decision could affect as many as 80 or 90 per cent of mail fraud cases pressed in the city. “[Thursday’s ruling] closes a loophole where prosecutors could come up with a theory about how some fiduciary duty was violated or some arcane non-criminal law was violated and use that as a basis for an ‘honest services’ prosecution,” he says. “It precludes prosecutors from prosecuting breaches of ethics as criminal offences.”

In fact, in light of Thursday’s ruling, it may no longer matter whether Conrad Black’s behaviour was unethical, and it’s entirely possible it was never supposed to be criminal in the first place. “I always said—in Black’s case and in other cases like it—that they’re pushing the envelope, that this is going beyond what the statute was ever intended for,” Martin says. “Up until today, no court ever agreed with me, but today we were vindicated.”