Industry Minister James Moore signs deal after a review of the agreement under the Investment Canada Act. 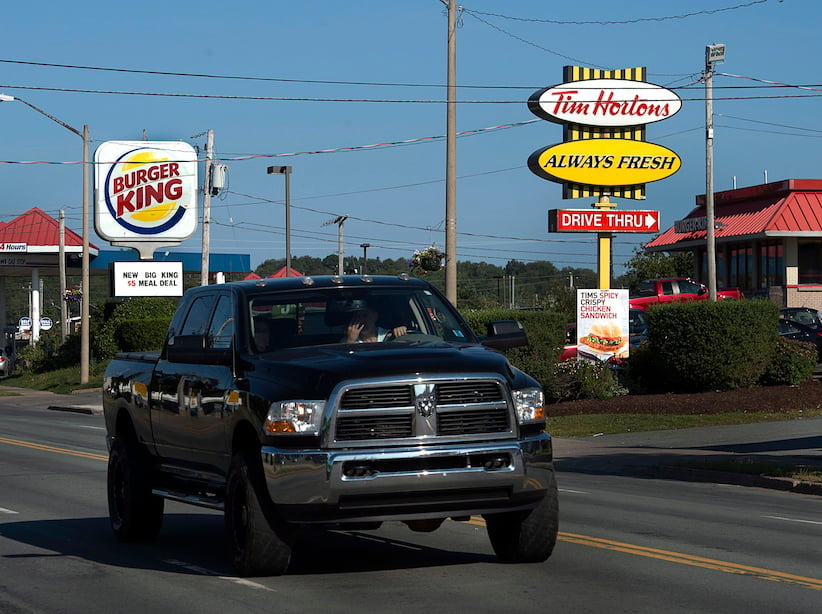 A Tim Hortons restaurant located next to a Burger King restaurant in Lower Sackville, N.S. on Monday, Aug. 25, 2014. (Andrew Vaughan/CP)

OTTAWA — The federal government approved the takeover of Tim Hortons Inc. by Burger King Worldwide Inc. on Thursday after securing promises on jobs and that the coffee shop chain will remain a distinct brand.

Industry Minister James Moore signed off on the deal following a review of the agreement under the Investment Canada Act.

“The result of this transaction is this new global company, with sales of more than $23 billion annually, which will now be based in Canada,” Moore said in a statement after the close of markets on Thursday.

“Our government is pleased to see companies like Burger King investing in Canada’s economy and looking to benefit from our low taxes and open markets.”

As part of the approval, the company has agreed to maintain the existing employment levels at Tim Hortons franchises across Canada and expand in the U.S. and globally faster than planned.

The combined company will also establish its headquarters in Oakville, Ont., where Tim Hortons is currently based, and “maintain significant employment levels” at the office.

It will list on the Toronto Stock Exchange and maintain Tim Hortons as a distinct brand, without any co-branding in Canada or the United States.

The Canadian franchisee rent and royalty structure will also remain the same for five years.

The takeover received approval by U.S. antitrust regulators in September.

Burger King agreed in August to buy Tim Hortons in a friendly deal worth more than $12 billion in stock and cash.

The Competition Bureau approved the deal in October when it issued a “no action letter” after concluding the deal was unlikely to reduce competition.

Tim Hortons shareholders are expected to vote on the proposal at a special meeting on Dec. 9.

The merger of the two companies would create the world’s third-largest quick service restaurant company, with about $23 billion in system sales and more than 18,000 restaurants in 100 countries.

Critics have warned the takeover could mean layoffs and strict cost-cutting for Tim Hortons.

A study from the Canadian Centre for Policy Alternatives suggested the debt financing required could force Tim Hortons to layoff more than 700 employees — or 44 per cent of staff working outside its restaurants.

The report also suggested that Tim Hortons could spin off its distribution and manufacturing centres.

Tim Hortons has said it plans to keep the brand independent and maintain “traditional levels of community support, restaurant-level jobs and franchisee relationships.”