Groceries are getting ever pricier. Blame China?

This is part one of a series. Next up: Andrew Hepburn will look at whether low inventories and supply shocks are responsible for food price spikes. In the next and last article, Hepburn will examine the role played by financial speculators, as well U.S. subsidies for biofuel.

As Maclean’s noted yesterday, a report by the University of Guelph suggests that food prices in Canada could rise by 3.5 per cent in 2013. That might not be a shocking increase, but it’s still a significant one and it is a timely reminder of how expensive food has become in recent years.

As the following chart from the U.N. Food and Agriculture Organization (FAO) demonstrates, since 2004 food prices have levitated:

That’s bad news for everyone. In rich countries, though, the impact of food price hikes is generally limited: both because food accounts for a much small share of incomes there and because food producers and retailers usually opt to absorb most of the hit from higher prices rather than passing it on to consumers. In developing countries, by contrast, the most destitute spend upwards of 50 per cent of their income on food. When the price of basic staples rises, it means not enough food on the table. Hunger, in turn, easily leads to rioting and political instability. Unsurprisingly, food price are commonly thought to have helped ignite the Arab Spring.

So why are food prices rising and who—if anyone—is to blame for the food crises the world seems to run into more and more frequently?

In the words of the IMF:

Strong food demand from emerging economies, reflecting stronger per capita income growth, accounts for much of the increase in consumption. Although demand growth has been high for some time now, the recent sustained period of high global growth contributed to depleting global inventories, particularly of grains.

But does the received wisdom stand up to the evidence? I turned to a number of food-price experts, including several officials at FAO, for answers.

The first pitfall I found in this argument is that income growth in emerging economies —however fast — happens too gradually to be able to explain the sudden food price hikes of the past few years.

“The Indian and China change in consumer patterns that sometimes were referred to as a cause for the high prices is more something that works over the long term,” says Concepcion Calpe, an economist with the FAO. “They’re very important as an underlying tendency but they cannot explain these sudden changes”.

The argument that emerging economies are responsible for high food prices treads water in at least one other important respect. As the following two charts (provided courtesy of FAO) show, in the past few years China and India have often been net exporters of cereals: 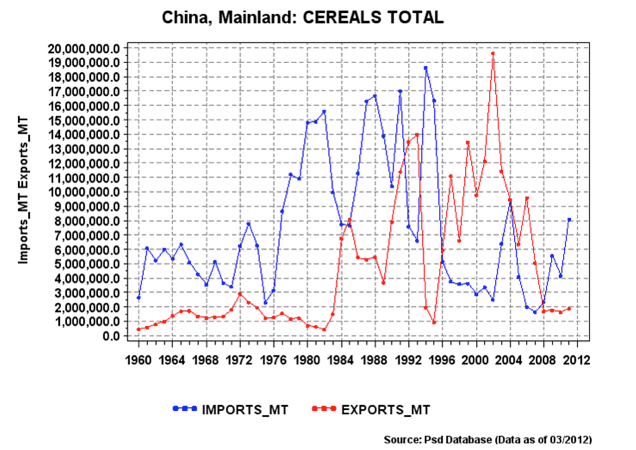 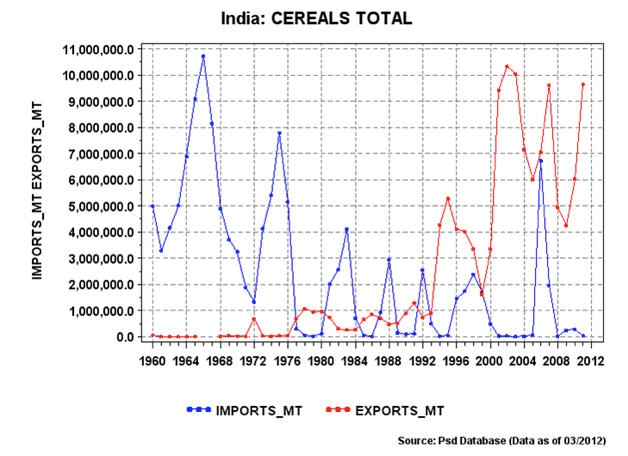 The strange case of China and soybeans

The story, though, becomes a bit more complex when one takes a look at another type of crop: soybeans. Here, Chinese demand has surged. Ever since 1995, the country’s imports have soared, and now account over 50 per cent of global trade: 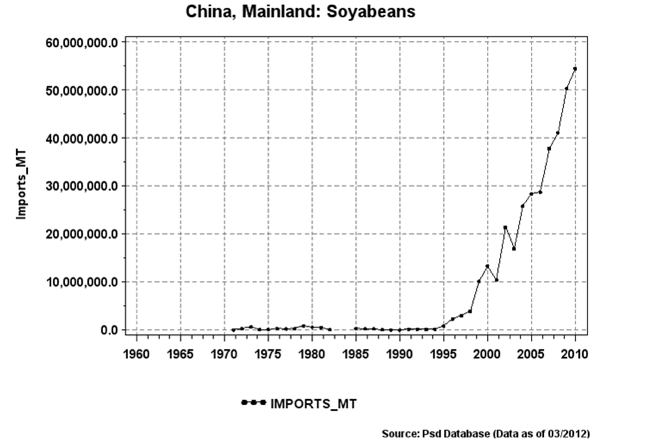 Why soybeans and not wheat? There are two trends at play here: China is consuming a lot more meat — especially pork and nowadays Chinese pigs tend to eat soybeans. 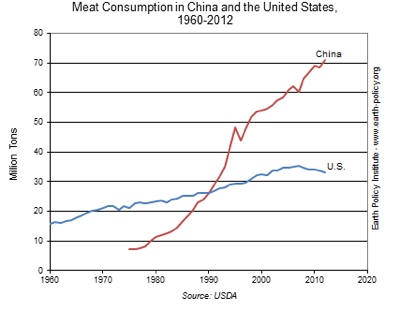 It wasn’t just a matter of China raising more pigs, which have to be fed. The pigs’ diet also changed — to include a lot of… you guessed it, soybeans.

Says Schmidhuber: “In the past, pigs were essentially grown in, quote unquote, backyard, backward systems. So that was essentially the four-pig household and they kept these four pigs literally under the same roof at the farm household and they were grown on roughages and table scraps and a little bit of cereals and other things.”

But pork production has shifted away from these kinds of operations and towards more specialized, often commercial farms.

“The intensity level of the feeding system changed as well, away from this roughages and table scraps-based diet to a feeding pattern that is more characterized by compound feeds and in particular of course, not only cereals, but also by soybeans”, the FAO official says. “That really drove up the requirements of soybeans and soybean imports to the extent we have seen it now.”

The reliance on imports is largely due to the government’s lack of promotion of soybean production, in favour of rice and wheat farming instead.

Now, you may be wondering what Chinese soybean imports have to do with wheat or grain prices. After all, when we speak of food crises, we are usually referring to spikes in the prices of key staples, which don’t generally include soybeans.

True. But when soybean prices rise relative to other crops, farmers around the world have an incentive to plant more soybeans versus competing crops like wheat or corn. This results in lower production of the rival crops (or lower than it would otherwise be), and hence higher prices for all of the commodities.

In the words of the International International Food Policy Research Institute, “simple back-of-the-envelope calculations suggest that non-soybean grain production in the United States might be 3 percent higher today than would have been the case had this switch not occurred.”

Chinese soybean imports, therefore, probably contributed somewhat to the long-term rise in the prices of crops like wheat and corn. But as the IFPRI notes, “this increased demand was spread out over many years and seems to have been sufficiently accommodated by extensive production growth among the three major exporters [of soybeans].”

As Calpe notes, the main charge against China and India isn’t so much that people are consuming more staples like wheat and rice, but rather “that they diverted a lot of these cereals to be converted into animal products.”

Even so, the data is clear: China and India, even with two billion-plus mouths to feed, have played at best a marginal or supporting role in the high food prices of recent years.

But if the two countries are largely exonerated, what are the real culprits of rising food prices? In our next post, we’ll continue the search.

—
Andrew Hepburn is a former hedge fund analyst. He’s a commodities bear and a keen observer of financial speculators. For Maclean’s he blogs about the economy and financial markets.