Acquisitions of Nexen and Progress Energy will go through

In separate statements released after North American markets closed on Friday, Industry Minister Christian Paradis said he was satisfied that the acquisitions by Malaysia’s Petronas and China’s CNOOC were likely to be of net benefit to Canada. Paradis said both companies had “made significant commitments to Canada in the areas of: governance, including commitments on transparency and disclosure; commercial orientation, including an adherence to Canadian laws and practices as well as free market principles” and “employment and capital investments, which demonstrate a long-term commitment to the development of the Canadian economy.” Initially, Malaysia’s Petronas $6-billion bid for Progress Energy was rejected by the federal government and the company later revised its proposal. 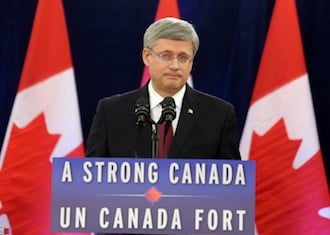 Under the new guidelines, the acquisition of oil sands companies by foreign state-owned enterprises will only be found to constitute a new benefit for Canada in “exceptional circumstances.” And, despite today’s decision on Nexen, the prime minister seemed eager to draw a line on such investments, saying these decisions marked “not the beginning of a trend, but rather the end of a trend.”

“To be blunt, Canadians have not spent years reducing the ownership of sectors of the economy by our own governments, only to see them bought and controlled by foreign governments instead. That was never the purpose of the Investment Canada Act. It is not an outcome that Canadians would ever support. It is not an outcome any responsible government of Canada could ever allow to happen,” the Prime Minister explained.

“In light of growing trends, and following the decisions made today, the government of Canada has determined that foreign state control of oil sands development has reached the point at which further such foreign state control would not be of net benefit to Canada,” Harper said. “When we say that Canada is open for business, we do not mean that Canada is for sale to foreign governments.”

David Detomasi, a professor of international business at Queen’s University, said the two deals forced Ottawa to clarify the Investment Canada Act’s “net benefit” test, which was used to quash the takeover of Potash Corp. of Saskatchewan two years ago. “I think the Harper government was caught a little bit flat-footed when these bids were made,” he says. “I think they realized that whatever precedent they set was going to be something they were going to have to live with. And that’s because there are likely other deals in the offing.”

Even so, it will be a tough balance for Ottawa to strike, according to Detomasi. Recovering crude from the oil sands is a massively capital-intensive business and there aren’t enough deep-pocketed Canadian companies capable of making the necessary investments. And many foreign companies—particularly those in China—are state-owned. “Unfortunately, they’re the ones with the cash.”

The opposition New Democrats declared themselves “profoundly disappointed” with the Nexen deal, suggesting that proper public consultation did not occur before the decision was made. “Canadians should be very apprehensive about the long-term economic and environmental consequences,” Peter Julian, the NDP’s natural resources critic, said in a release. “In the past, these kinds of takeovers have resulted in job losses. In October, the NDP called for the government to reject the CNOOC acquisition.

While saying that the Liberals welcome investment—”we do need investment in the oilsands and in other industries”—Liberal trade critic Wayne Easter also expressed concerns. “There’s still really no clarity. We still don’t know the details. We have no idea what those rules really are,” he said. “Are all state-owned enterprises being handled the same, whether it’s China or any other country? Should there be different criteria, given the strategic planning of some countries versus others? Is there reciprocity here? I’m led to believe there’s not. There should be reciprocity in terms of how Canadian investment in China is handled in a similar way to Chinese investment in Canada.”

Alberta Premier Alison Redford said her government was “pleased” with the Harper government’s decisions, but that Alberta would be seeking clarity on how “exceptional circumstances” will be defined.