That’s the conclusion of a report released yesterday by the Parliamentary Budget Officer. I’m not convinced.

Some context first. As described here, the federal government’s path to a balanced budget, as charted by every Conservative budget since 2010, requires holding nominal expenditures on program spending constant — there’s no provision for increased spending to compensate for inflation. This means cuts. Instead of large, targeted reductions in one sector, the government is applying pressure across the board. The PBO report was prepared at the request of Paul Dewar, who is the MP for Ottawa Centre and whose constituents are more likely than most to be directly affected by these cost-cutting campaigns.

This is the key table from the PBO report: 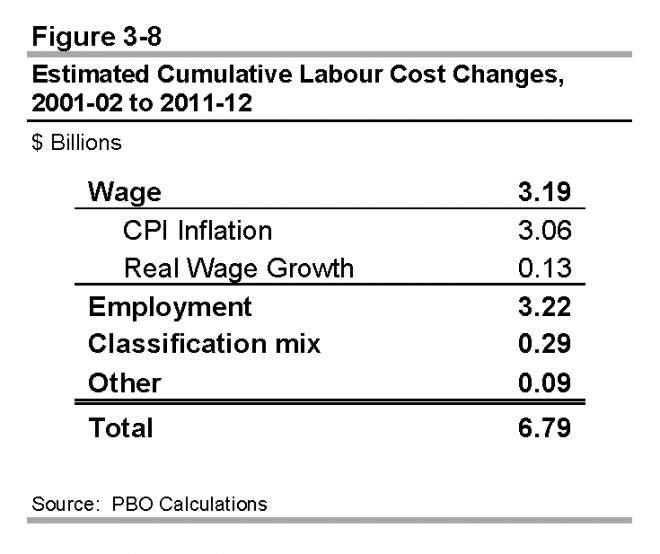 The table decomposes increased federal spending on employment across different factors, and the two most important are simply the increase in number of employees and inflation. Real wage growth is tiny.

This seems implausible: Were federal public employees the only group that missed out on the wage gains in the last decade?

Here’s what the general trend in real wages looks like over the past 10 years according to Statistics Canada:

The average real wage increase is about 1.75 per cent a year – much more significant than what the PBO analysis suggests. The PBO’s analysis is based on a disaggregated database, but then again, so are StatsCan’s aggregate Survey of Employment, Payrolls and Hours series. There’s probably a perfectly good reason why the two sets of numbers differ so dramatically. Off-hand, though, I can’t imagine what that explanation could be.