'Highly leveraged' is not what you want to be right now

Despite significant mortgage rules tightening; despite repeated warnings by the central bank and politicians; despite admitting to being concerned about the “fiscal cliff” and all the uncertainty around the U.S. economy, Canadians are still borrowing galore. Families now owe an average of over $1.64 for every dollar of after-tax income they bring in, Statistics Canada said today. The ratio of household debt to disposable income climbed 1.3 per cent between July and September, up from 163.3 per cent in the previous three months.

The stricter rules on lending and the policymakers’ alarm bells—not to mention the prohibitive cost of housings in many areas—have only succeeded in slowing down the pace at which Canadians are piling on loans. But household keep wading deeper and deeper into the red. Canadians’ equity in their homes edged down, in the third quarter as mortgage debt grew faster than the value of real estate. 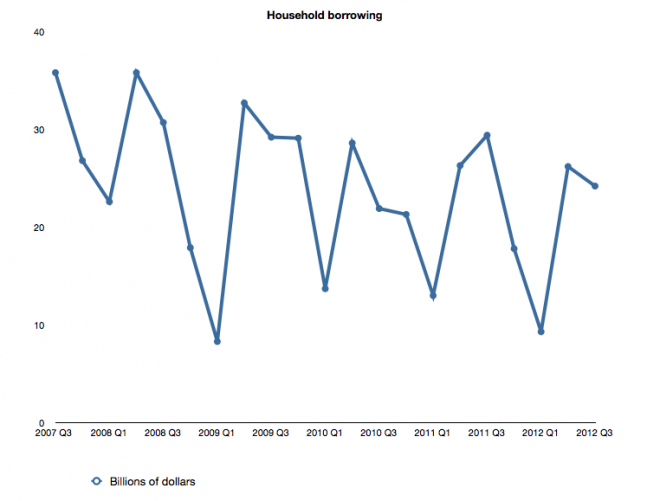 “Highly leveraged” is not what you want to be if the economy starts pointing south. As the Bank of Canada warned, should house prices or the labour market take a plunge, highly indebted households would have no way to cope and would likely drag down the economy with them (think loan losses at financial institutions and depressed consumer demand). And, as the Bank noted, the two shocks are interrelated, meaning the one could trigger the other.

That, of course, is the worst case scenario. But the latest statistics offer little comfort: oversupply in the condo market, the Achille’s heel of the housing market, still hasn’t eased much. The labour market doesn’t look much better: although employers went on a hiring binge in November, adding some 60,000, mostly full-time positions, analysts were quick to point out that the new jobs were mostly concentrated in low-pay, retail and hospitality gigs. Not to mention that job numbers have been very volatile this year, with big spikes one month followed by near-stalls the next.

No one’s saying Armageddon is coming, but wouldn’t it be a good idea to start playing it safe with household balance sheets?