How a small Toronto firm ended up designing the CN Tower 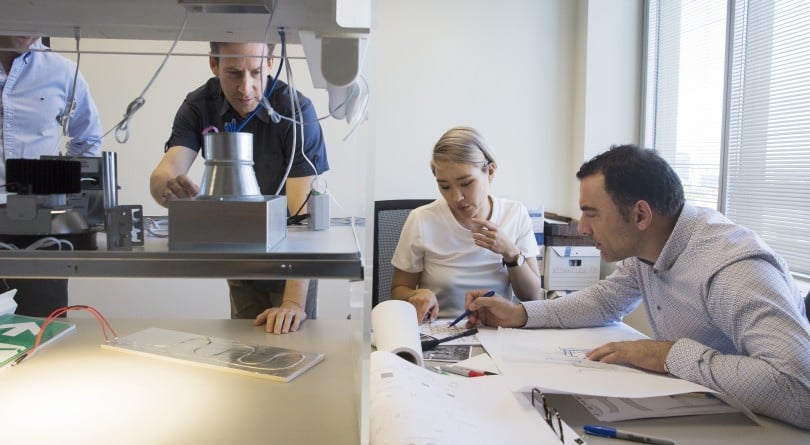 WZMH has been working with Quasar Engineering, Stephenson Engineering and C3PoE on the Intelligent Structural Panel, left, which integrates smart technology into floors and walls (Photograph by Michelle Siu)

In an industry obsessed with making everything bigger, brighter and bolder, WZMH Architects proves that, sometimes, small is the way to go—at least when it comes to the size of an architecture firm.

With just 12 partners and 120 employees, WZMH is tiny compared to competitors with thousands of people spread across offices around the world. And yet the firm still managed to win contracts for some of Toronto’s most famous buildings, including the CN Tower, Royal Bank Plaza and Scotia Plaza. The 57-year-old company is also responsible for Nation Towers in Abu Dhabi, a university campus in Kuwait and a couple of Four Seasons Hotels in Egypt.

WZMH is smaller than its rivals, but a focus on developing new technology, a willingness to collaborate and a commitment to nurturing the next generation of leaders has allowed it to chase complex contracts normally reserved for the building Goliaths. This audacity to slug it out with industry giants is just one reason why WZMH has three times earned a position on Deloitte’s list of Canada’s Best Managed Companies. “One of our former clients shared some advice that his father gave him many years ago: ‘Don’t stand still or you’ll get run over,’ ” says Carl Blanchaer, who’s been with the firm since 1981, making him the longest-standing partner. “Those words always ring in my head.”

In order to play in the big leagues—and grow profitably while doing so—WZMH obsesses over diversification. It’s a player in the residential, institutional, commercial, mixed-use, hospitality and technology sectors with both private- and public-sector clients. “Having a mix enables us to be busy even when certain markets are slow,” says Zenon Radewych, a partner who joined in 1995. “We’re chasing and winning those large infrastructure projects, but we’re also doing a lot of work for the private sector at the same time.”

In 2015, WZMH merged with Pellow and Associates, a boutique firm that specialized in giant shopping malls, such as Canada’s largest open-air mall in Ontario’s Niagara region. By piggybacking on a company with expertise in larger retail projects, WZMH gained access to new clients. As a result, the firm recently landed its first major mixed-use project, a revitalization of the Promenade Shopping Centre in Vaughan, Ont. It also found success teaming up with SmithGroupJJR—an American architectural design firm that builds forensic laboratory facilities—on the glassy 49,000-sq.-m Forensic Services and Coroner’s Complex in Toronto, which houses autopsy stations, a firing range, an isolation ward and courtrooms. The project went on to win several awards.

Partnerships are one way WZMH appears bigger than it is. Innovating relentlessly is another. Since December, the firm has been working with Quasar Consulting Group, Stephenson Engineering and C3PoE to develop so-called Intelligent Structural Panels. It’s a daring concept that integrates smart technology directly into the floors and walls of buildings, allowing for everything from motorized roller shades that react to sunlight to sensors that trigger the heating or air conditioning. Connecting this kind of infrastructure to the panels enables it all to be controlled from a device. The project was so promising that it was accepted into Microsoft’s Internet of Things (IoT) Insider Labs, making WZMH the first architectural practice to join the prestigious program. “The fact that WZMH is working to implement IoT into the bones of buildings, that’s incredible,” says Deloitte’s Tatyana Sabitova, who works with the firm. “They’re taking the digital revolution to heart.”

This same focus on the future is reflected in how the company develops its staff. The company has had young people at the helm since the beginning, when it was formed by four men in their late 20s whose surnames later inspired its name: Peter Webb, Boris Zerafa, René Menkès and Warwick Housden. Its 12 principals today are mostly younger blood who were promoted from within.

Younger staff are given real responsibilities, not busywork. Tejasi Gadkari is a 28-year-old who joined the company a year ago as an architectural designer. Among her projects was a proposal for the Ontario Provincial Police, suggesting possible bulletproof glass, fade-resistant bricks and alloys for nine OPP detachments. Two-thirds of her selections were approved and submitted with the proposal. “I had discussions all the time with my partner, John White. There were times when he would question my choices. ‘Why did you choose this shade of glass? Why this material?’ It never made me feel shunned. It just made me think even harder,” says Gadkari.

This engagement with the firm’s leaders is built into the floor plan. No matter where you stand in the office’s open-concept layout, you can see the entire floor and every single employee. There are also Wednesday sketch breaks, where employees leave their computers at lunch and draw from building models to get their creative juices flowing. In a highly competitive field where there’s a war for talent, the firm knows it must treat everyone like a future leader. As Radewych points out, having mentors is key to longevity. “Carl [Blanchaer] has been here the longest and he’s been like a father figure for all of us,” he says. “He’s put in a great succession plan to ensure the firm stays around for a very, very long time.”