How boomers are weighing down the employment rate

Population aging is affecting the recovery 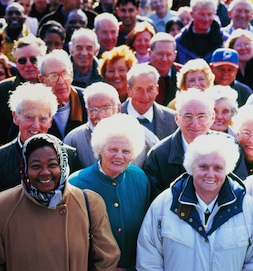 The unemployment rate is the best-known number published by the Labour Force Survey, but it is not the necessarily the most informative statistic about the labour market. According to the LFS, employment status is self-reported: you are classified as “unemployed” if you say that you are not employed and are currently looking for work.

There’s nothing wrong with this approach (especially since no-one can think of a better one), but it can lead to misleading impressions of trends in the labour market. One problem is the phenomenon of the “discouraged worker.” If the prospects for finding a job are so poor that an unemployed person simply gives up looking for work, she is considered to be out of the labour force and no longer officially unemployed. The reported unemployment rate will fall, even though labour market conditions have not improved.

There’s also the inverse phenomenon—the “encouraged worker”: when labour market conditions improve, people who had given up on finding work may resume their job search. This is what we saw in September: employment grew by 52,000, but the labour force grew by more than 72,000—likely because the better-looking labour market convinced some of the long-term unemployed to send out resumes once again. The result was that the unemployment rate increased from 7.3 per cent to 7.4 per cent.

Roughly half of the increase in the unemployment rate has been rolled back in the last three years, but employment rates have barely recovered. Why?

Paul Krugman noted a similar pattern in the U.S. and conjectures that population aging explains why the employment rate there is improving so slowly. The year 2008 was noteworthy not only for the recession, but for an important demographic turning point: the share of the population who are of working age peaked in 2008. The swings in the working-age share in the graph below correspond to the arrival of the baby-boom cohort (the arrival of a wave of children reduced the population share of those of working age) followed by their arrival on the job market in the 1970s and 1980s. But now that this group is approaching retirement age, all plausible demographic projections show a steep decline over the next few decades: 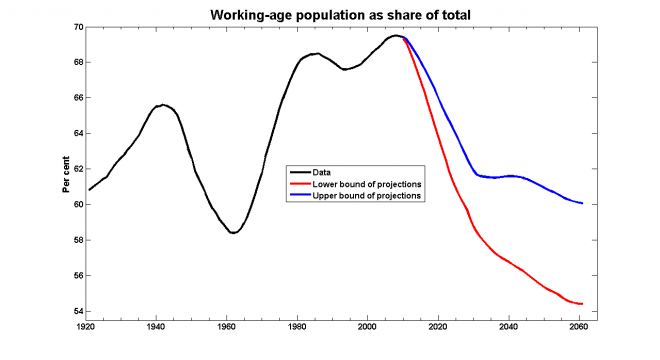 Suppose—à la Krugman—that we consider a counterfactual scenario in which the relative sizes of the age groups stayed the same as it was during, say, the 18 months between January 2007 and June 2008, and each group had the same employment rates as reported by the LFS. Here is what you get:

The changes in this adjusted employment rate look a lot like those of the prime working age group: a drop of 2-2.5 per cent during the recession, with about half of this loss being recovered in the last three years.

It’s easy to forget about population aging: it’s a long-term trend, and we usually don’t worry too much about long-term trends when doing business cycle analysis. But it looks as though it’s happening fast enough to be an issue in the short run as well. It doesn’t seem that we’re going to recover those pre-recession employment rates. Not necessarily because of weakness in the labour market, but because older people are less likely to be in employment. Everything else being equal, fewer workers make for less output, so if we want total incomes to grow, we’re going to have to find a way to significantly increase the productivity of those who will still be working as the population ages.