How Kids & Company modernized child care for the on-demand age

By solving a common problem for both employers and parents, Kids & Company has quickly grown to more than a hundred locations 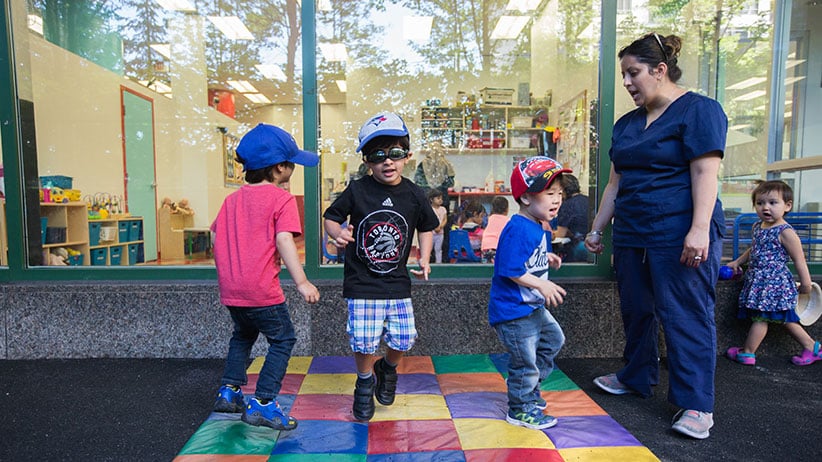 Victoria Sopik is bouncing her four-month-old granddaughter in one arm and packing for a weekend at the cottage with the other when she phones from her home near Toronto. As a mother of eight and the co-owner of 100 daycare centres, Sopik’s existence is devoted to children. Perplexingly, she isn’t exhausted. “My whole life has been about juggling work-life balance,” she says, handing the baby to her daughter, the child’s mother, for a diaper change. Seeking that balance inspired her and business partner Jennifer Nashmi to start Kids & Company 15 years ago. Achieving balance has given her the stamina to keep the business expanding ever since.

Before Kids & Company, Sopik felt off-kilter when it came to dividing her time between family and work. The lack of accessible, flexible and affordable child care was an impediment to being both a devoted mom and a thriving entrepreneur. To help, she sponsored a live-in nanny from Germany—an arduous and expensive process. “I thought, there had to be better options for working parents in Canada,” she said. But there weren’t.

MORE: How Harry Rosen is making alterations to appeal to millennial shoppers

The lack of solutions peeved Sopik, but also presented an exciting opportunity. In 2002, she and Nashmi opened the first Kids & Company centre in Toronto, offering flexible and emergency child care services suited to the busy and unpredictable schedules of working parents. Today, the company, based in Richmond Hill, Ont., has more than 1,300 employees with revenue in the range of $50 to $100 million. In addition to its Canadian operation, the company operates six centres in the United States: five in Chicago and one opening soon in Boston. For four consecutive years, Kids & Company has appeared on Deloitte’s Best Managed Companies list. “We’ve managed to grow by never saying ‘no.’ That’s always been our policy,” says Sopik. “Whatever parents need for their children, we’re here to offer it.”

That commitment to holistic service is rare in an industry with high overhead and skinny margins. If you have kids—or know anyone who does—you know that obtaining daycare services can be a nightmarish process. The fees are often astronomical, even surpassing the cost of rent or a mortgage payment; the drop-off and pick-up hours are often rigid and inconvenient; and the waitlists can stretch to hundreds of children.

Sopik and Nashmi cured these headaches through a unique business model. Corporations pay an annual fee to partner with Kids & Company and offer child care services as part of employees’ benefit packages. In exchange, parents at those firms get guaranteed access to a quality daycare centre with flexible hours. Children can be enrolled full- or part-time and—in the case of an emergency or unexpected meeting—can be dropped at a centre without notice.

The partnership model provides funding to help Kids & Company grow; corporate partners get an alluring benefit to attract and retain talent. “It’s nearly a must-have these days for companies to be competitive,” says Sopik. “For the past five or six years, we haven’t gone out to find clients—they’ve come to us.”

That wasn’t always the case. In the beginning, most potential clients had never thought of offering a child care option to their employees, Sopik says. Only when an American company began peddling the model in Canada, around the same time Kids & Company launched, did corporations start considering the service. “It was really lucky for us,” Sopik says. “We could point to this successful company and say, ‘Look at this great model they’re using in the U.S.—wouldn’t you prefer to deal with a Canadian company of local moms?’ That was our big selling point.”

It still took time to earn companies’ trust, says Sopik. In the beginning, they offered free corporate memberships to attract wary companies. Little by little, corporations were persuaded of the service’s value. Soon, Kids & Company was doubling its number of centres every year.

While Sopik and Nashmi did benefit from being the first Canadian firm in the market, it’s the company’s management style and fearlessness that have kept the momentum going. “The heart of the Best Managed program isn’t about being at the right place at the right time,” says Chinmaya Thakore, a senior manager at Deloitte who coached Kids & Company on their application for the ranking. “It’s about whether you got there through a well-thought-out strategy, whether you built a team around that strategy that’s allowed you to execute on it, and whether you’re committed enough to be able to do that for a sustainable period of time.”

When Thakore met Sopik and Nashmi six years ago at the Canadian Women Entrepreneur Awards, she knew they had the focus and determination of a Best Managed company. But the founders also had an attractive humility that permeated the company’s culture. “The key is knowing we’re not the best we can be,” says Sopik. “It’s about consistently asking, ‘What can we do to improve?’ ”

The company identiﬁes opportunities for betterment through biannual surveys in which teachers and directors at the child care centres offer anonymous feedback, which is consolidated and shared with employees, parents and corporate partners. Innovative thinking is also encouraged with financial incentives: every quarter, employees can submit suggestions for how to hone services or processes. An employee, or team of employees, is then rewarded with a bonus when their idea helps the company save money or generate profits,

“We’ve learned a lot through trial and error,” says Sopik. One invaluable lesson, she says, was creating consistent customer service across their dozens of centres in disparate cities and towns. Employees, many of whom are unionized, all wear uniforms. The firm’s hiring process, while favouring current employees, is formal and opens all positions to external candidates. “We’ve become a large, sophisticated company,” says Sopik. “That means we don’t do anything on an ad hoc or casual basis.”

Indeed, that sweet spot between structure and flexibility is precisely what makes Kids & Company attractive to parents—and Sopik knows that because she talks with them regularly. “I get a call or email at least once a day from a parent,” she says. “The great news is that 90 per cent of those are positive.” For Sopik, that’s the clearest indication that her company is thriving. “As a parent, you know that nothing matters except how happy your children are.”