How much higher will the deficit be this year: $7 billion or $5 billion?

The government released its annual fall assessment of Canada’s economic and fiscal situation today, which updates projections it made in the March budget. If you’ve read a few different press reports about it, you have good reason to feel confused.

Here’s how the Globe and Mail opens on the Fall Economic Update:

This year’s federal deficit is on track to be nearly $7-billion larger than what Ottawa projected in March, as lower prices for commodities, lower economic growth and increased spending on veterans benefits have thrown the Conservative government’s deficit numbers off track over the short term.

And here’s what Bloomberg remarks about the upward revision to this year’s projected budget deficit:

The deficit for the current fiscal year was raised to C$26 billion from C$21.1 billion, little changed from the previous year.

What’s going on? Let me explain. Here’s the table where both the Globe and Bloomberg got their figures: 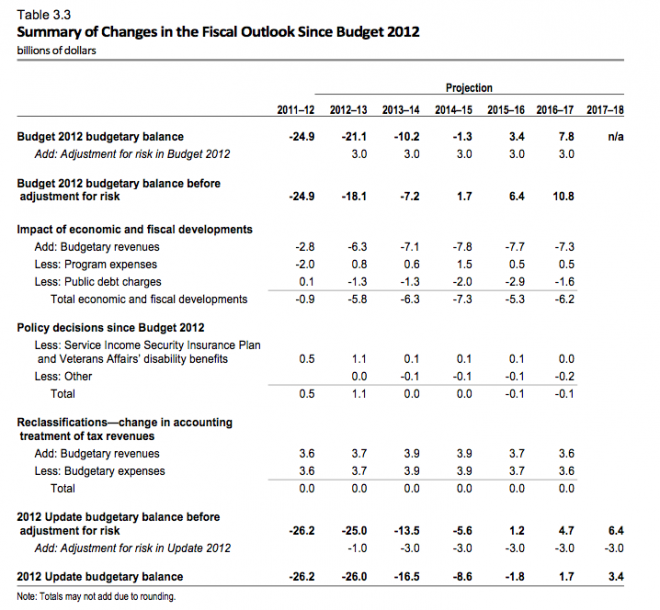 Now, the numbers in bold in the first row indicate what the government thought the deficit would be every year between 2012-2013 and 2016-2017 in a pessimistic case-scenario. The third row is what Flaherty was hoping for in an optimistic scenario, i.e. barring a number of possible negative developments. In the optimistic scenario, the March budget forecast this year’s deficit (look at 2012-2013) at just over $18 billion. In the less rosy scenario, the estimate was just over $21 billion.

At the bottom of the table are Flaherty’s updated pessimistic scenarios: this year’s expected deficit is now slightly above $26 billion. If things go as well as they can go for the rest of the year, it will be $25 billion.

Now, Bloomberg (and Reuters and many others) are relying on the government’s pessimistic forecasts (also known as “conservative” forecasts). That’s why they also write that: “Flaherty’s budget update projects a return to balance by the fiscal year beginning April 2016, one year later than forecast in his March budget.” The Globe, by contrast, is using the optimistic estimates, which is why they write: “over the longer term, Finance Minister Jim Flaherty’s fall fiscal update shows Ottawa is still on track to come close to balancing the books by 2015-16.”