How Rogers scored a blockbuster deal with the NHL

Inside the historic 12-year agreement for Canadian rights 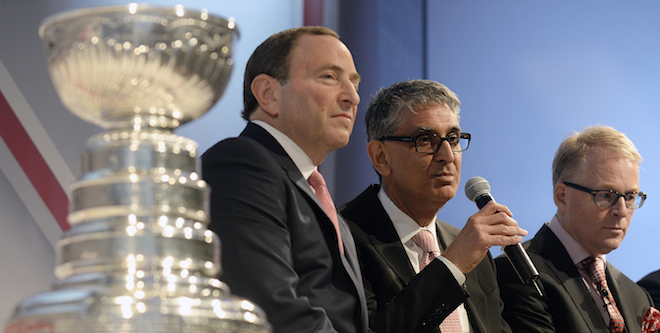 A couple of years back, the president of CTV served up what hockey players call a “greaseboard quote”—a remark freighted with enough contempt or condescension to galvanize the other team, ultimately filling the speaker with regret. “Not many people want to leave the Pittsburgh Penguins,” Phil King had said, “to go play for the Nashville Predators.”

King was addressing the possibility of a talent exodus from CTV’s powerhouse sports network TSN to upstart Rogers Sportsnet—the former being the stylish, high-flying Pens and the latter … well, you get the picture. The words quickly found their way to the wall of Sportsnet’s studio in Toronto, and with Tuesday’s announcement by Rogers of a 12-year, $5.2-billion NHL broadcasting deal, they were suddenly enjoying renewed relevance. “The business is very small,” said Rogers Media President Keith Pelley, a smile playing at the corners of his mouth. “I know they’re having a tough day [at TSN].”

Tough enough that the rush to jump ship started earlier than even he anticipated. “The over-under on the first call was 9 a.m.,” Pelley told Maclean’s dryly. “It came in under that.”

Of course, when the earth tilts, you’re bound to hear the shuffle of feet. And to the Canadian mind, what transpired Tuesday was inarguably seismic. In a sprawling, historic deal, Rogers became both the source and gatekeeper of all national NHL broadcasts, assuming control of everything from games streamed onto iPads, to the Saturday night mainstay of Hockey Night in Canada. CBC will continue to carry Hockey Night in Canada under a separate sub-licensing deal for four more years, while French-language broadcasts will appear on Quebec’s TVA network. But if hockey is the fuel of the nation’s soul, both tap and funnel are now in the hands of Rogers (whose media properties include Maclean’s). The Toronto-based telecom giant holds national rights to all TV, wireless, Internet-streamed, radio and satellite-radio broadcasts (regional broadcasts will still be up for grabs, but Sportsnet’s regional channels already carry many of them). All games involving Canadian teams will now be available to all Canadians, and on Saturday nights, fans might switch between any of 10 different games throughout the league. Rogers even plans to roll out a main-event Sunday night game as a complement Hockey Night.

To fans with good telecom bundles, it’s a cloudburst of options. To an increasingly sports-dependent media industry, it’s a game-changer—starting with the crippling blow delivered to TSN. Long the presumptive inheritor of CBC’s hockey tradition, the slickly produced channel must now content itself with the crumbs left behind by Sportsnet and the rest of the Rogers empire. Factor in the digital and wireless rights, where many believe the future of sports broadcasting lies, and the reverberations reach every corner of TSN’s parent, Bell Media. As Pelley put it: “Never before has a premium sports league offered its content to one media entity. We now have control of the most-coveted national sports content. It’s truly transformational.”

Considering its scale—by far the longest and most expensive in Canadian history—the deal came together with surprising speed. After the CBC’s exclusive renegotiation period closed in mid-September, Bettman and his deputy commissioner Bill Daly made the rounds of the Toronto networks to set out a couple of possible scenarios. The first, which Bettman terms the “slice and dice,” was modelled on the National Football Leagues deals with U.S. broadcasters, where top dollar is paid for exclusive game windows, such as Sunday and Monday Night Football. The second was a bold new approach where a single broadcaster would control all national rights across all platforms. “This was our vision, what we thought would be best for the game and our fans,” said Bettman. “Rogers was incredibly and quickly responsive.”

The league’s asking price for the full buffet was steep—at least $400 million a year, more than double the expiring Canadian deals. But to Pelley’s ears, it sounded like a bargain. “Controlling the most coveted content in the Canadian market for 12 years?” he recalled. “People [at Rogers] got on board pretty quickly, once they wrapped their heads around just how large the rights offer was and what we could do with it.”

A few weeks later, Rogers returned to the table with its $5.2 billion proposal—$150 million up front and annual rights fees that start at around $300 million a season, and then climb towards $500 million by the end of the deal. There were really no sticking points. “We were so aligned with what the vision was it was incredible,” said Pelley.

The Rogers offer far outstripped what the CBC and Bell Media had proposed. (Bell Media acknowledged in a statement that it was “ultimately outbid”). An agreement in principle was reached by Nov. 20. Rogers had initially considered going it alone, even running the costs of setting up its own French-language version of Sportsnet to compete with Bell’s RDS channel. But with the NHL’s blessing, the company decided to reach out to Québecor and its fledgling TVA Sports Network as a Quebec partner, and to make the CBC an offer it couldn’t refuse. CBC President Hubert Lacroix told reporters that Bettman informed him on Nov. 21 that Rogers was the winner, but an opportunity still existed for the network to continue broadcasting hockey. The four-year sharing arrangement, wrapped up over the course of the weekend, will see Hockey Night in Canada continue on CBC until at least its 65th season on Saturday nights and during the playoffs.

But Rogers will take control of game production and the brand, running multiple games at the same time on its own Sportsnet and CityTV channels. And while CBC will get 320 hours of NHL hockey between the 2014-15 and the 2017-18 seasons, that’s all. “Rogers takes on all the revenues from all the properties,” Lacroix said. “We have no costs and we don’t pay any broadcasting rights.”

What will happen over the remaining eight years of the new deal is an open question. As is the ultimate fate of the CBC employees who produce and even star on the show. Asked directly about Don Cherry’s future at the morning press conference, Pelley said it’s still too early to predict just how things will shake out. Bettman—perhaps sensing the next day’s headlines—quickly sought to offer an assurance that there is no sword hanging over the Coach’s Corner. “Don Cherry is a great talent and a good friend of the NHL,” said the commissioner.

The 12-year term is long for a broadcast rights agreement, but both the league and Rogers say it will provide a measure of stability in a rapidly evolving marketplace. Handed full control of the NHL.ca website, and online viewing platforms like NHL Centre Ice, the company will be able to sell ads across all devices and offer consumers everything from all-you-can-eat access, to just the games of a single U.S.-based team. On the conventional TV side, all the Rogers channels will now feature highly coveted sports content—making them a lot more desirable, should the federal government follow through on its plans to let cable subscribers move to “pick and pay” packages.

More than anything, though, the new deal is about money. In the mid-1990s, the CBC secured a four-year, exclusive NHL deal by offering a total of $265 million. And the last time the Canadian rights came up in 2006, the price for a six-year non-exclusive package was $569 million. (TSN has been paying about $80 million a season for its slate of regular-season and playoff games.)

The $5.2 billion Rogers deal is a galactic leap, averaging out at $433 million a season, far outstripping the $200 million a year that NBC is paying for network and cable rights in the U.S., a market 10-times the size. Coming off its third lockout in 18 seasons, NHL owners have been handed a lottery-like windfall. John Collins, the league’s chief operating officer said he recently told the Board of Governors that the league might hit $4 billion in annual revenues by the 2017-18 season. Now he’s revising his prediction. “We thought that was a bit optimistic at the time, but maybe we undershot it.”