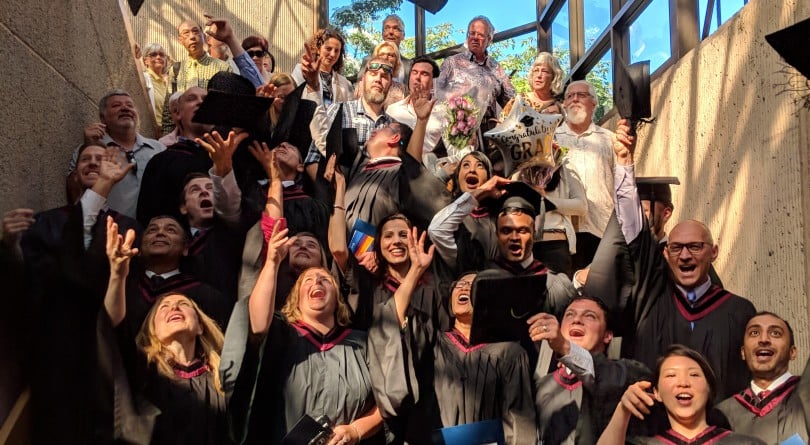 When Kevyn McGregor finished his MBA at the University of Victoria in the fall of 2017, he didn’t take his newly minted degree and hit the job market. He already had a job—at a company where he’d worked for more than two decades. And his new degree was specially tailored to ensure his success at that firm.

McGregor’s MBA program was designed specifically for employees at Telus, where he worked as a director of customer experience. At nearly 50 years old, he was one of 20 participants to enrol in the first class.

The cohort of students began their studies in September 2015, but the planning started long before that. About 10 years ago, executives at Telus decided to study how they approached executive education. What were they doing to develop their employees—and was it working?

They funded employees’ MBA educations, but at various universities and at various times. After looking at the money spent on education programs, along with corporate programs and retreats, they realized they weren’t seeing the results they wanted. So they turned to business schools for a new solution.

Telus examined proposals from 10 schools across the country, but it was ultimately the Peter B. Gustavson School of Business at the University of Victoria that won out. They took a traditional MBA program and adapted it to work for Telus. Dan Pontefract, Telus’s chief envisioner, says it was U Vic’s collaborative style that sealed the deal. “This is not an MBA that’s been taken off the shelf,” Pontefract says. “They were very willing to meet us halfway and say, ‘Look, we want to understand what your culture is at Telus.’ ”

And while there are some changes in the syllabus, Mark Colgate, director of corporate MBA programs at U Vic, says about 80 per cent of the program is transferred directly from a traditional program. “A great coaching class, a great strategy class, a great leadership class looks the same,” Colgate says. The difference came down to recognizing the specific challenges faced by a telecom company in the current era. “As a professor, you have to understand what’s going on inside of Telus . . . you can then gear the content more pragmatically toward the people inside the organization.”

There was a learning curve. Colgate says it was tough at first to balance the traditional course load for students who were also working full-time jobs. They completed more than 3,000 hours of course work, four residences and five major projects a year, in addition to working full-time executive-level jobs at Telus. “There were times when it was bloody hell,” McGregor says. “We would talk openly about the stress and the challenge.”

Colgate and the team at U Vic took that feedback seriously. They significantly changed the workload and tried to further infuse the course work with the language and culture of Telus.

One of the main concerns wasn’t making the material feel relevant for Telus employees, but what would happen when all the students weren’t just in the same industry, but worked for the same company. Colgate says there were worries that students would miss hearing the diverse opinions and experiences expressed in a typical MBA cohort. “It ended up being a good thing,” Colgate says. “They can talk the same language, and they’ve got the same strategic priorities.”

Instead of homogenizing the experience, McGregor says being in a class with 19 of his colleagues built a psychological safety net, allowing the students to use their shared language “to listen and understand, not just to the faculty but to each other.”

For McGregor, the stress was worth the prestige of being one of the first to complete the program. “[That] will be a highlight of my career and my life, without question,” he says.

Earning that opportunity wasn’t easy. McGregor first had to qualify for admission to the University of Victoria. Then he had to pass the gatekeepers at Telus. Pontefract set up an eight-person committee, responsible for carefully considering which employees would make it to the coveted team of 20. Applicants submitted letters and videos pleading for spots, along with three recommendation letters from supervisors at the company. They also had to show the committee their dedication to values like leadership and community.

Pontefract says the committee took its role seriously. “I’ll never forget the first meeting, because it was supposed to be an hour and it lasted three,” Pontefract recalls. “There we were, professionally bickering over why this candidate should be in over that candidate. And we had just under 100 applications to suss through for 20 spots.”

Initially, the program was an experiment to see if Telus could get a better return on their educational spending. In that regard, Pontefract says the answer was an unequivocal yes. For the first 20 students, Telus invested roughly $1.3 million over their two years of study. But the students’ resulting work has proven even more valuable to the company. “The return we’ve garnered between net new revenue opportunities and cost savings as a result of the in-year program assignments, the major consulting projects . . . has resulted in $315 million in savings,” Pontefract says.

Telus executives saw the benefit of a specialized MBA program; the University of Victoria was happy with the results, too. And as a bonus, the program has gained outside recognition.

In May, the European Foundation for Management Development recognized the university with a Silver Award at the Excellence in Practice Awards, and the Association to Advance Collegiate Schools of Business gave the program its Innovations That Inspire award. “When you put up for an award, you really are competing against the best of the best,” Colgate says. “I think it’s a nice validation that what we’re doing is on the right track.”

“I would say the awards, they’re nice, but what I feel is just an overwhelming sense of gratitude,” says McGregor. Since his graduation, McGregor has moved up in the company, working as a director within Telus’s mobile customer experience division.

Ultimately, McGregor can’t help but gush about his experience. A year after graduating, he says he and his fellow classmates still talk regularly, despite working at different levels across the country. “We connect on a regular basis. The social networks that have been created go much deeper than just the business learning and personal relationships, but the social network continues to this day.”

Clearly, the bosses at Telus were impressed, too. The second cohort is currently going through the program, and Pontefract says the company has already approved two other groups for the MBA, to start in 2019 and 2021.