How to sell 9 million greeting cards 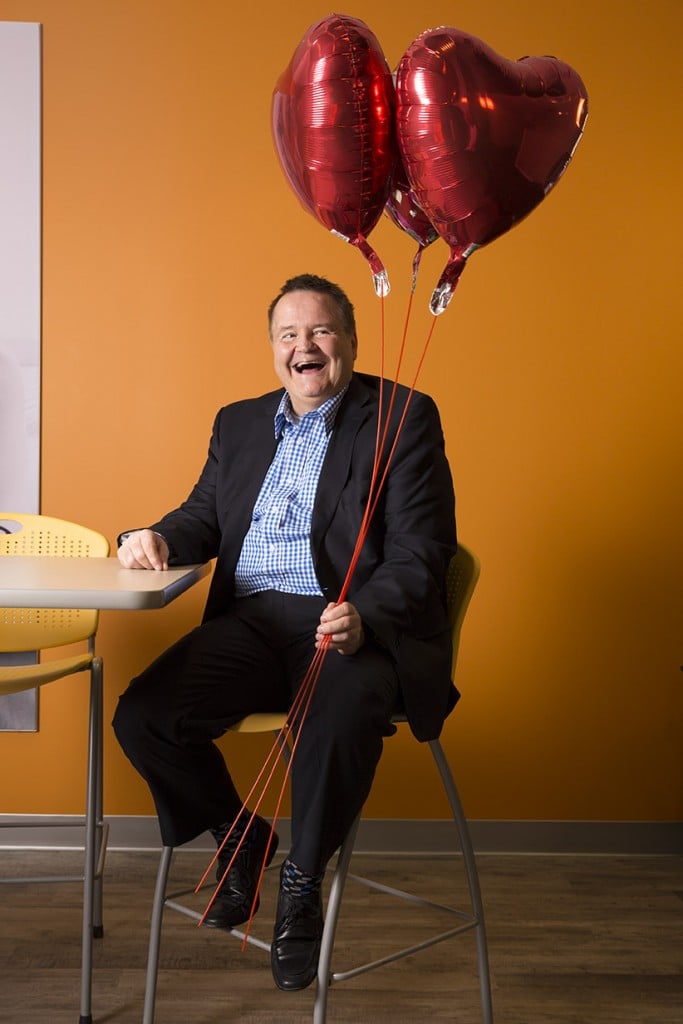 Jim Driscoll, director of marketing at Carlton Cards, is photographed at the Carlton Cards office on January 29, 2016.
Photograph by Kayla Chobotiuk

On a card rack, the row at eye level is technically called “the power row.” On the Ides of February, it lures shoppers into a valley of Valentine’s Day cards by showing them the bestsellers and new releases: Cupid dancing in a diaper; a squirrel puckering up for a smooch.

“We lead off with the surprise and delight cards,” says Jim Driscoll, marketing director for Carlton Cards, as he paces through the showroom in the head office in Mississauga, Ont. “We’ve got all the wife [cards] next. We get into sweetheart. We get into husband.”

When Driscoll and his team learned their sprawling selection was overwhelming shoppers, they consulted a psychologist and introduced a blank space beneath the power row called “the visual relief strip.” The racks also bear dividers known as “blades” and colour-coordinated headings. “It’s not by accident,” says Driscoll. “We make it easy for the customer to pick up what they want and get out.”

But Valentine’s Day displays don’t just reflect how people want to shop. Rather, the cards—in all their pink, $6.99 glory—reflect how people show their love. Carlton Cards sells about nine million cards in Canada specifically for the occasion each year, and according to Ipsos Reid, Carlton holds about half of the entire card market (Valentine’s Day or otherwise); the main competitor is Hallmark Canada, based in Markham, Ont. Many of Carlton’s cards gush with roses-are-red sentiment, suggesting many people cache a lot of love that goes unspoken. “We make cards to help them say something they have a hard time saying on their own,” explains Driscoll. “That’s the need we fulfill.”

The cards also depict the changing face of relationships; for same-sex couples, many of the wife and husband cards don’t specify the gender of the sender; for aging couples, cards have large fonts, and other card companies, such as Nobleworks, offer products for couples who met online (or in line at the grocery store). Almost none of Carlton’s options have phrases like “forever and ever” because divorce rates are so high. “You can’t have that on all your cards,” says Driscoll, “because unfortunately that’s not what happens in today’s world.”

Although Canadians might be mistaken for reserved people, the popularity of risqué Valentine’s Day cards proves otherwise. “I want your clothes on my floor,” reads one featured card this year. In others, a caveman says his wife makes his “parts” feel good, and a woman complains, “we don’t always see eye to eye . . . but maybe we would if you stopped looking at my boobs.” Perhaps the most daring is a technological card that opens to reveal a mattress shaking aggressively. “Studies indicate that the bed is the most utilized piece of furniture in the modern home,” it reads. “Let utilizing begin.”

According to Driscoll, teenagers want fewer words in their cards; plenty of people want cards made of recycled paper, and no age group ever tires of “crazy cat” cards. If the industry is an accurate reflection, then young people keep their romance brief; many people won’t express love at the expense of the environment, and the human condition contains an unwavering affinity for kittens and golden retriever puppies. Other trends are less easily explicable. For some reason, Newfoundlanders love sending cards designed for anonymous giving.

Carlton’s sales, growing two to three per cent annually for the past decade, also reflect a digital fatigue in favour of physical gifts. Over Driscoll’s 20 years with the company, the card industry has survived the advent of email, Facebook and iPhones, along with doubling of postage costs. While Carlton prints its cards all over North America, and manufactures the electronic components in China, smaller card companies say consumers go so far as to want their gifts handmade. “The handmade revolution has hit Canada,” says Chantal Bennett, owner of Papillon Press, an Ontarian company that prints cards on an antique letterpress. “They want the thoughtfulness of something physical.” Matthew Del Dagen, the creator of recycled concrete figures called “Lovebots,” agrees. “They’re hand-made, eco-friendly,” he says. “Lovebot really is a relationship icon.”

Although shoppers are cost-focused during occasions like Easter and birthdays, they aren’t as concerned about putting a price on love. “When we ask what consumers want,” says Driscoll, “price is way down on their list.” Valentine’s Day cards are some of the most expensive, ranging from $3.99 to $7.99, often proportional to the number of googily eyes and motorized creatures contained within. Based on market research, people are willing to pay more for “paper engineering” (or pop-ups), and built-in technology. At the Cleveland headquarters of American Greetings, which owns Carlton Cards, a team of about 500 writers and illustrators constantly thinks up ideas, including, in one case, a card containing a margarita flavour strip to place on the tongue; the card had nutrition facts on the back. “I would’ve thought that’s weird,” says Driscoll, “but it sold really well.”

Trends in other Valentine’s Day gifts suggest people want to show their love in healthier ways. To meet the demand for high quality sweets, Rocky Mountain Chocolate Factory offers strawberries dipped in dark or sugar-free chocolate, rolled in nuts and sea salt, while the packaging explains the origins of its cocoa. Meanwhile, some florists sell pesticide-free, fair trade flowers wrapped in biodegradable cellophane, with tags reminding customers that flowers help purify the air in their homes.

Ironically, Valentine’s Day also reveals a kind of selfishness. In customer surveys, Carlton found that people cared more about their personal preferences in a card than the preferences of the receiver. “We kept hearing the word I, I, I,” says Driscoll. About 10 years ago, he led a shift in focus toward pleasing the card sender rather than the receiver. “It was a real aha moment for the company,” he says. They realized the cards must “speak” in the way the sender would speak, so the receiver immediately knows who sent it. On the relationship spectrum of hand-holding to marriage, the cards must exchange greetings between people at every stage. One card with a pair of chubby rodents reads, “I like chin-chillin’ with you,” while another has a 10-verse poem. In analytical terms, the cards must perform a range of “jobs.”

In many people’s eyes, Valentine’s Day reveals nothing but the disappointing commercialism of love, having no connection to the holiday’s origins. In Ancient Rome, men ran around a hill wearing goatskin thongs in mid-February to awaken powers of fertility deadened by winter, laughing loudly for extra stimulus. By 500 CE, the day was used to honour a priest named Valentine who performed secret marriages so men could avoid military conscription. Later, single people would get “valentined” by the first single person they saw the morning of Feb. 14, and their affair would often last until Easter. The holiday traditionally involved magic, with people conjuring Cupid, the son of the goddesss of love, and chanting love spells to their valentines and feeding them aphrodisiacs like bananas or figs. Such traditions are far removed from handing over an envelope from Shoppers Drug Mart.

The Valentine’s Day Grinches also argue the occasion can be hard on the single person’s soul. Carlton acknowledged the complaints one year by offering “anti-Valentines” for single women to commiserate with their friends. Yet, other people suggest the day is a harmless reminder for people to exchange appreciation. “You can say you don’t need Valentine’s Day,” says Bennett of Papillon Press, “but the fact is most people do need it as a prompt. It’s like a designated date night.”

One aspect of Valentine’s Day that has remained traditional is the distinction in gender roles. It’s the only holiday when men buy more cards than women, and market analytics show they tend to bolt to the store at the last minute, not knowing what they want. Driscoll himself hasn’t chosen a card yet for his wife (they live in Oakville, Ont., with their two children), but he wants a greeting that makes fun of himself. As he paces the rows of the company’s showroom, one card particularly makes him laugh. It features a man lounging in the living room, telling his wife, “You think I don’t notice all the things you do for me?” Inside, the character explains, “I’ve been right here watching from the couch.”