Iceberg harvesting is a swashbuckling new industry in Newfoundland and Labrador

The recent theft of 30,000 litres of iceberg water, reputed for its purity and low mineral content, shows how vital this enterprise has become 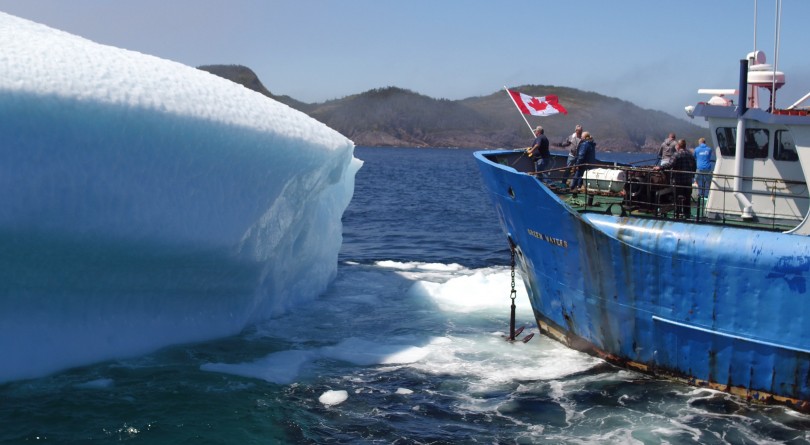 During the summer, near the uninhabited fjord of Jakobshavn in west Greenland, a shotgun-like concussion will occasionally reverberate across the ice sheet. It’s the sound of a kilometre-high mountain of snowfall—compressed over many tens of thousands of years and weighing as much as 100 full ocean freighters—cracking off the mothership. The piece will surge into the Arctic Ocean almost in slow motion, as if bouncing into a bowl of Jell-O, while a cascade of ice chunks and powder roars the news: An iceberg is born.

Harvesting icebergs that break off Greenland is an emerging industry in Newfoundland and Labrador. Iceberg water, sought after for its reputed purity and low mineral content, is worth the arduous labour involved to hunt, capture and crush the ice. It’s also apparently worth stealing, which is what police say happened in the hamlet of Port Union this past winter.

The chain of events leading up to the curious crime begins with Captain Ed Kean, 60, an eighth-generation mariner and the most renowned iceberg cowboy in Newfoundland. One clear day in mid-May 2017, while delivering cases of iceberg water in his pickup truck to tourist shops in Bonavista Bay, he spotted the frozen tower in “Iceberg Alley,” off the province’s east coast.

Kean, with 30 years of iceberg harvesting experience, knew that within days this iceberg would break up and float into the inlets that notch the underside of the cape. “We gotta catch some of ’em,” he said.

A week later, he and a crew of seven began the month-long harvest to collect about a million litres of water for the distillers of Iceberg Vodka. In a tugboat pulling a 54-m barge, they launched at dawn from Port Union, once a bustling hub of factories, fleets and ﬁsh plants, but now, like most outports in Newfoundland and Labrador, whittled away by the collapse of the cod-ﬁshing industry. Today, fewer than 400 people live here. “It’s the way to make a living,” says Kean, who estimates the ice-harvesting industry employs about 200 people seasonally. “That’s it.”

They sidle up to a bungalow-sized iceberg and throw a noose around it. They crank a winch to pull the iceberg toward the barge. When it’s close enough, they drop anchor. On board is a backhoe with a custom-made mechanical claw, which Kean controls from a swivel chair in the cab. Each bite is one metric tonne of ice. “It goes crunch,” he says, “like chewing up cornflakes.”

The bites then go into a crusher, which grinds the chunks into hockey-puck-sized pieces, which are then dumped into stainless steel holding tanks. The men worked until mid-afternoon that day, their faces burned from the reflection of sunlight off the berg.

Twenty months later, alas, thieves broke into the Iceberg Vodka warehouse in Port Union, stealing 30,000 litres, or a tractor trailer’s worth, of iceberg water—some of it from Kean’s harvest in May 2017. News of the heist made headlines around the world. The vodka maker is out $12,000, and while the RCMP says the case is still open, the mystery has left head-scratching questions: Where is the market for stolen iceberg water? If there were one, how would the thieves prove they had the real article? Or did they think they were stealing vodka?

The mistaken vodka theory seems most probable to Iceberg Vodka president David Meyers. “I’m pretty shocked and unhappy that someone stole my water,” he says from his home base in Toronto, adding that it’s akin to grapes being nicked from a winery. “It’s not like you can just go out and buy more.” The water would have produced 65,000 bottles of vodka, selling for $23 to $30 each.

READ: What it feels like to get up close with icebergs in Newfoundland

Iceberg harvesting seemed to take off in the province about three years ago. Six companies are licensed to do it; they pay the province a fee based on volume, a regulation that recently came into effect after locals balked at paying a flat $5,000 charge. In addition to vodka, it’s used in craft beer—sold in pretty, cobalt-blue bottles—ice cubes, wine, cosmetics and bottled water, which Maclean’s found selling in one Los Angeles bar for $33 per bottle.

But what some call the global “cold rush” has also led to scams and public backlash. Two years ago, a Hong Kong supermarket pulled bottles of water said to be made of glacier water they were selling for $950 each; critics derided the product as senseless exploitation of shrinking glaciers in the name of luxury. And in what Harper’s magazine dubbed “a global-warming get-rich-quick scheme,” Canadian dentist-turned-waterpreneur Otto Spork was accused by the Ontario Securities Commission of a massive fraud in relation to an Icelandic glacier water ruse that cost investors a reported $20 million. The Ontario Court of Justice found him guilty in 2011.

In down-home Newfoundland, however, iceberg ice has long been freely shared as a novelty and a sign of hospitality, whether in a red plastic cup with Screech rum and Coke, or at the bar in the Fogo Island Inn, where the rooms start at $1,975 per night.

In the last two decades, though, icebergs have been marching past the province in alarming and unprecedented numbers. Average years used to bring 500 into the transatlantic shipping lanes off Newfoundland and Labrador. Nowadays, the numbers are often double that: fully 1,008 appeared in 2017. It was the fourth extreme ice year in a row, according to the International Ice Patrol. Also, more ice than ever is calving off Greenland, responsible for one-third of the world’s rising sea levels associated with climate change.

So we may marvel at 20,000-year-old pollution-free ice cubes clinking in our drinks. Or stare slack-jawed through camera lenses at the sight of gargantuan bergs. But what’s already gone is much greater—so great, in fact, that it makes 30,000 litres of stolen water seem like a drop in the bucket.