In a fight over minimum wage at Tim Hortons, the worker loses

With both Tim Hortons franchisees and the company's head office refusing to absorb the costs of higher wages, front-line workers are paying the price by having their benefits cut 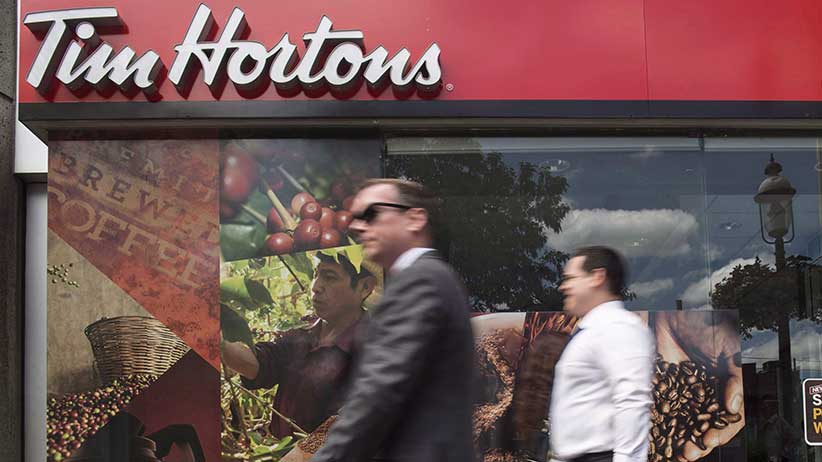 For months leading up to Ontario’s minimum wage increase, businesses have been warning of dire consequences such as price hikes, job losses, and reduced staffing. Some business owners, according to the Canadian Federation of Independent Business, said they would consider shutting down, selling out or moving elsewhere. Now that the wage increase is in effect, some of these predictions are coming to pass—at Canada’s most iconic coffee chain, no less.

The owners of a Tim Hortons franchise in Cobourg, Ont. sent a letter to employees asking them to sign a document acknowledging the loss of certain benefits, paid breaks and other incentives in response to the province’s minimum wage hike. (As of January 1, the minimum wage increased from $11.40 per hour to $14. It will increase to $15 per hour next year.) The owners also happen to be married couple Ron Joyce Jr. and Jeri-Lynn Horton-Joyce, the son and daughter of the company’s co-founders. Joyce’s father is worth $1.57-billion, according to Canadian Business.

The letter, posted to Facebook last month and first reported by CBC, informs workers that breaks will no longer be paid and that those with more than five years service will have to cover half the cost of their benefits, whereas the entire cost was previously covered by their employer. “We apologize for these changes,” the letter reads. “Once the costs of the future are better know [sic] we may bring back some or all of the benefits we have had to remove.”

The news has prompted considerable outrage online, and even Premier Kathleen Wynne weighed in with a statement Thursday directed at Joyce. “It is the act of a bully,” Wynne said of the letter. “If Mr. Joyce wants to pick a fight, I urge him to pick it with me and not those working the pick-up window and service counter of his stores.”

While the son of a billionaire stripping minimum wage workers of their benefits is an easy target for the premier, the situation is also the result of tension between franchise operators and the Tim Hortons’ parent company, Restaurant Brands International (RBI). Ultimately, neither franchisees nor head office wants to risk profitability by absorbing the costs of higher wages, and so front-line workers end up losing.

READ: Why a $15 minimum wage is good for business

Unlike truly independent small business owners, franchisees have limited control over their operations. “Tim Hortons is managed top-down as a franchise concept,” says Douglas Hunter, author of Double Double, a history of the company. “The reality for franchisees is their profit margins are really dependent on costs that they do not have a tremendous amount of control over.” One cost store owners can control is labour—a fact Tim Hortons was quick to point out in response to CBC’s story. “Almost all of our restaurants in Canada are independently owned and operated by small business owners who are responsible for handling all employment matters, including all policies for benefits and wages, for their restaurants,” a media rep said in a statement.

Left unsaid is what the corporate office controls, such as menu prices and the supply costs to the franchisees. Other businesses have announced price hikes purportedly in response to the minimum wage increase, a predictable and less controversial measure than disadvantaging employees. Franchisees, however, don’t have that option since prices are typically set by head office. Franchisees are also obligated to purchase food and equipment from the corporate parent, and have little leverage to negotiate those costs down.

The Great White North Franchisee Association, a group that says it represents 60 per cent of Tim Hortons owners in Canada, criticized the parent company for failing to help its members deal with Ontario’s minimum wage legislation. The GWNFA board of directors issued a statement saying it hoped RBI “would lend support to franchisees in the chain by lowering food and paper costs, reducing couponing and raising menu board prices…While other competitors have received concessions from their franchisors, unfortunately our chain has not.” As a result, “many of our store owners are left no alternative but to implement cost saving measures in order to survive.” RBI did not directly reply to the statement when asked by Maclean’s.

READ: Why are Tim Hortons’ lids so awful?

The association has a fractious relationship to Tim Hortons and RBI. In June, a $500 million lawsuit was filed on behalf of a GWNFA member against RBI, alleging the company improperly used money from a national advertising fund. The association filed another suit in October, accusing RBI of seeking to “interfere with, restrict, penalize or threaten franchisees from exercising their rights to associate.” (The claims have not been tested in court, and RBI denies the allegations.)

RBI, which also owns Burger King and Popeyes Louisiana Kitchen, earned US$955-million in profit in 2016, an 87 per cent increase over the year before. Just how much money a Tim Hortons franchisee earns is less clear. “Anybody I’ve known running a Tim’s has said it’s not a license to print money,” Hunter says.

The question of how Tim Hortons responds to the minimum wage increase is likely to intensify for both franchisees and the parent company. By the end of 2018, Alberta, Quebec and Prince Edward Island are expected to raise the minimum wage, too.