In praise of the Yukon Gold potato

One man is on a mission to make sure the world knows the the Hollywood status of this Canadian potato. 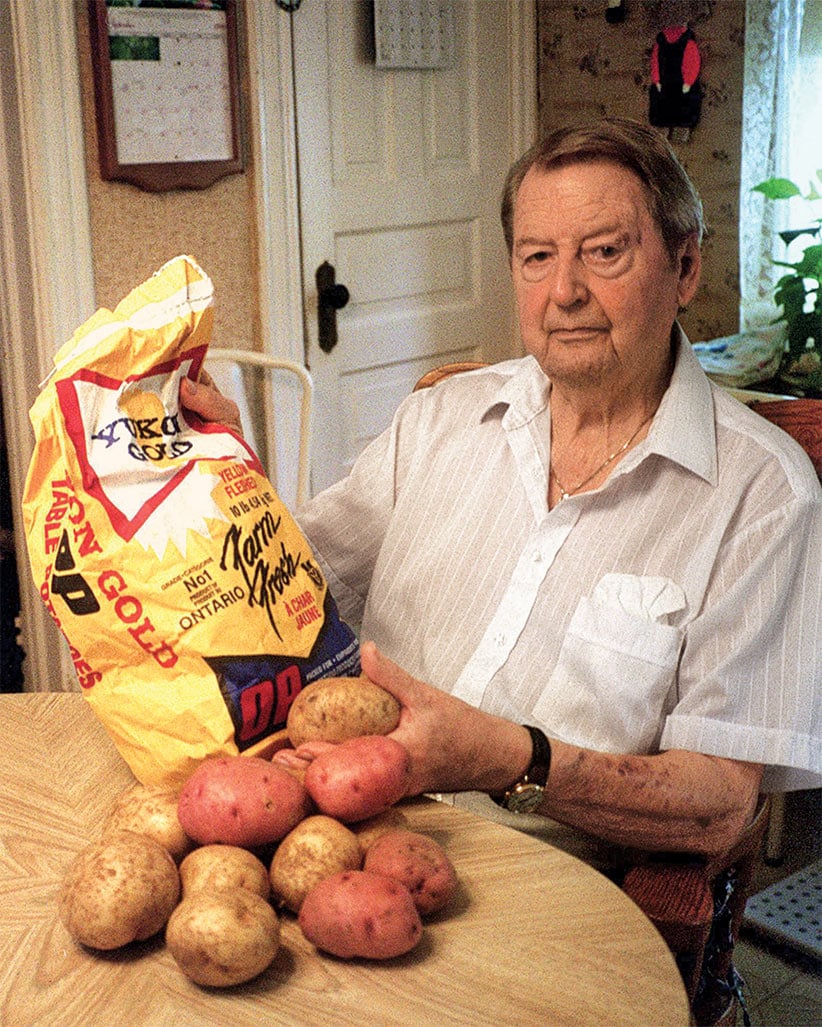 This post was originally published in April, 2016, marking the 50th anniversary of the Yukon Gold potato

On Barack Obama’s table at holiday feasts; on Justin Trudeau’s plate at his White House state dinner; and on the Oscar gala hors-d’oeuvres trays, was a small yellow potato called the Yukon Gold. Alexander York von Sivers, a 59-year-old man in Toronto, is on a mission to make sure everybody knows it. “It’s a story that had to be told,” he says.

York has been working for three years to publicize the 50th anniversary of the invention of this potato, which was bred by researchers at the University of Guelph in 1966. “I’m going after every food editor in the United States,” he says. “I’d like to have potato festivals across Canada. I’ve spoken with Martha Stewart’s executive director five times, and she’s trying to get me a congratulatory letter. If I had my way, I’d have a huge Yukon Gold event in Times Square.”

The Yukon Gold, with its roots in Ontario, has become a posh potato. It was served dauphinoise at the state dinner, and frequently to the Obamas, mashed. At the Oscars in February, 600 kg of roasted Yukon Golds were presented with crème fraiche and Caspian caviar, prepared at the command of Wolfgang Puck. Queen Elizabeth II dines on the potato at Buckingham Palace; Rachael Ray calls for it in her recipes; and Chelsea Clinton endorses it as a personal favourite. But as York says, “the average Canadian is not aware of the Hollywood status of this potato.”

York has spent about 500 hours digging through archives on the potato. His fixation is partly due to his father, Hans von Sivers. Hans was a laboratory technician with Garnet “Gary” Johnston, the University of Guelph researcher who led a team that cross-bred two varieties to create the Yukon Gold. Before its invention, North American farmers only grew white-fleshed potatoes, and Johnston anticipated the appeal of a yellow, small-sized variety, which looks like it’s drenched in butter. “It was a revolutionary concept,” says Hielke De Jong, a potato breeder with Agriculture and Agri-Food Canada, who knew Johnston. “He was a pioneer. He had the vision for yellow-fleshed potatoes.”

The invention came from a male parent grown in North Dakota (considered male because it spreads pollen), and a female, yellow parent grown in Peru. After 14 years, on the 66th cross of 1966, Johnston created a variety known technically as G6666-4y (“G” for Guelph, 4 for the fourth selection from the cross, and “y” for yellow). Johnston originally named it after the Yukon River—his previous varieties included the Huron and the Rideau—but his colleague Walter Shy suggested adding the word “Gold” in honour of its yellow tint. Not to be confused with “new potatoes,” which are small, sweet spuds of any variety picked earliest in the season, the Yukon Gold has pink eyes and tan skin.

Soon after Yukon Golds hit the market in 1980, chefs were serving it to presidents. “When I started at the White House, it became like the new kid on the block,” says former White House chef John Moeller. “I like the butteriness of it. I do a purée, with added parsnip purée and sweated-down leeks. It’s a nice smooth consistency. When you see a white potato, it just doesn’t look as appealing.” Moeller also cooks Yukon Golds au gratin with garlic custard, and he roasts baby Yukons to serve as marble-sized garnishing. “You can put one potato on your fork and eat it in one bite,” he says.

Alex Docherty, a P.E.I. potato farmer, also recalls the rise of the new spud. “It was known in all of North America as the champion, the best yellow potato that was ever grown,” he says. “If you said ‘I got a load of yellows,’ the first question out of the buyer would be, ‘Are they Yukon Golds?’ ” 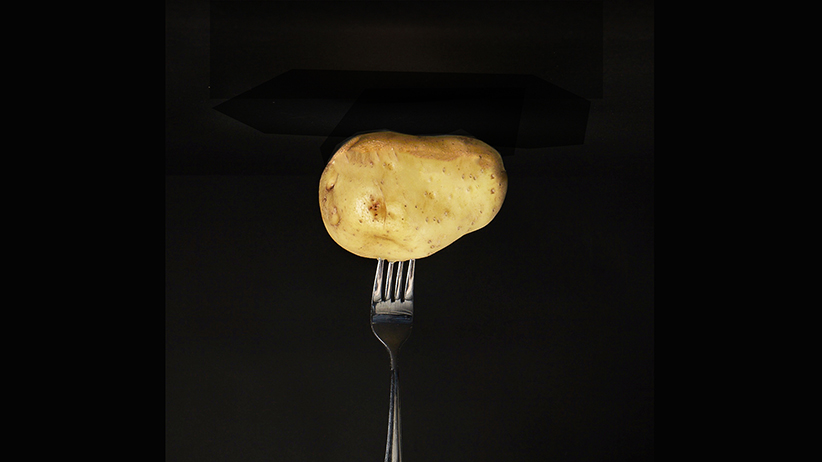 Yukon Golds became so sought-after that grocery stores began disguising other varieties as Yukon Golds—a practice that potato breeders say still continues today. “You see it in the grocery stores,” says De Jong. A different controversy arose in 1997 when Hillary Clinton falsely claimed that everything on the menu at a White House state dinner, including the Yukon Golds, was American. A New York Times food editor exposed the slip-up, and the Clinton administration issued an apology, giving the Yukon Gold a marketing boost. “Without the New York Times,” says York, “this potato never would have succeeded.”

Johnston died in 2000, at age 85, of diabetes complications, having never made a penny off his potato (prior to the 1990 Canadian Plant Breeders’ Rights Act, breeders didn’t have intellectual property rights). York now wants to commemorate the man’s work and build a library on the potato. “I want to make sure Gary Johnston isn’t a footnote in Canadian history,” he says.

As a day job, York works as a freelancer chasing interview subjects for radio stations and news outlets, having studied marketing at Ryerson University. He wants to write a book on the potato and film a documentary with footage from inside the White House kitchen. He hopes to crowdfund $200,000 for an agriculture scholarship in Johnston’s memory and raise the status of the University of Guelph. “I want to get this in every relevant textbook in the country,” he says. He also plans to coordinate potato festivals with trivia competitions and book sales to raise money for food banks.

While the Yukon Gold may be celebrated as an innovation story, potatoes in general are rarely celebrated as a vegetable. Sales in Canada dropped 30 per cent between 2004 and 2014. “It doesn’t get the credit that it deserves,” says Greg Donald, general manager of the P.E.I. Potato Board. “It had some rough years there with the Atkins diet, but it’s still there, and it’s still a great vegetable.” The potato is also a reliable vegetable for chefs, compared to greens, tomatoes or carrots, which are less predictable and rot faster. “The majority of the time, the vegetables are my nemesis,” says Moeller. “Sometimes I order baby carrots, and they’re adolescents or adults. Potatoes are definitely consistent.”

Amid more than 150 potato varieties grown in Canada, farmers debate which is the best. Breeders are looking for multi-purpose varieties with higher yields and shelf lives. “Just like cars, they’re looking for newer and better models,” says Donald of the P.E.I. Potato Board. Farmer Peter Griffin, whose company owns the trademark for Bud the Spud, suggests the slightly larger, yellow Annabelle potato, from Holland, is “destined to become a Canadian favourite.” The Yukon Gold also isn’t the only potato with celebrity status; when Islander Adam McQuaid of the Boston Bruins brought home the Stanley Cup, he filled it with a variety called Superior potatoes, and Marcia Cross of Desperate Housewives stars in a commercial for a variety called Rooster. Docherty, who stopped growing Yukon Golds about five years ago, says, “every breeder in the world is trying to find a replacement for the Yukon Gold.”

Proponents of the Yukon argue it won’t fade away. Although the variety is susceptible to certain diseases, such as the “common scab,” De Jong says farmers can deal with its weaknesses. “Potatoes are like people,” he says. “No potato is perfect.” York appreciates that other varieties are emerging, but he says, “a long, long list of famous chefs and foodies are very, very loyal to the Yukon.”

York grows the Yukon Gold in his own garden, and he’s collecting antique potato crates and sacks from the Yukon Gold’s history. Johnston’s colleague, Walter Shy, might have helped York commemorate the potato, but he died in 1995. “He was going to move mountains for the 50th anniversary,” says York. “I felt it was time that Canadians learn the story, especially young Canadians, so they can be inspired to become successful innovators. It’s always on my mind. Who am I going to contact next?”