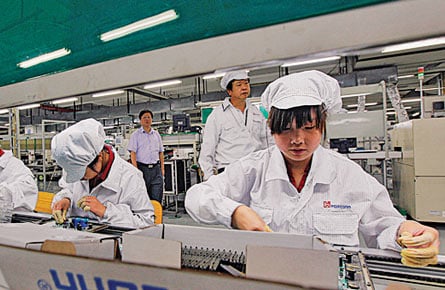 For decades, manufacturing jobs offshored from North America have fuelled the massive Chinese economy. But as wages in China rise, at least one firm is taking the next logical step to hold its cost advantage: “inshoring” jobs away from coastal manufacturing areas to even cheaper provinces inland.

Foxconn Technology, one of the world’s largest electronics makers, has started shifting 200,000 workers from its home base in the coastal city of Shenzhen, near Hong Kong, to lower-cost provinces. The company plans to eventually move all of its manufacturing jobs out of Shenzhen and turn its facilities there into “an engineering campus,” reports the Financial Times.

The company has struggled recently with a series of suicides at its plants, which it responded to by raising wages. But it is also credited with helping transform Shenzhen into a global manufacturing centre, and it is expected to similarly boost the economies of new regions it pushes into.