Until Natale is on board, the CEO's position will be filled by Alan Horn 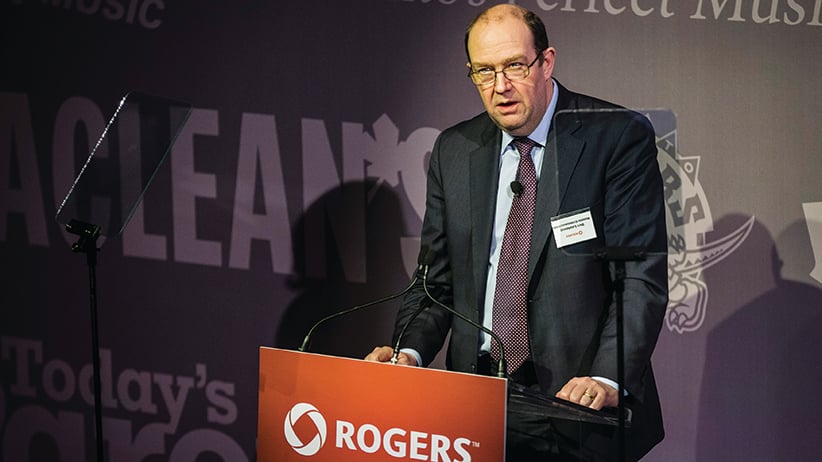 TORONTO — Rogers Communications says Guy Laurence has stepped down as president and CEO, less than three years after the former head of Vodafone UK was brought to Canada to turn the company around following a period of lacklustre growth.

The early morning announcement Monday of his departure — no reason was given — came minutes before Rogers (TSX:RCI.B) announced its latest financial report, which showed the company’s third-quarter profit was about 50 per cent lower than during the same time last year despite a slight increase in revenue.

Laurence’s replacement will be former Telus CEO Joe Natale, who led the Vancouver-based company during a period when it made customer gains against Rogers in the important mobile communications market.

Under Laurence’s stewardship, Rogers finalized a groundbreaking 12-year rights deal with the National Hockey League and underwent a number of management changes that were intended to make the company more nimble.

It has also navigated difficult waters in the media industry as a result of an ongoing shift towards digital publication and regulatory changes and competitive challenges that are pressuring the Rogers cable, broadcasting and publishing arms.

Until Natale is on board at Rogers, the CEO’s position will be filled on an interim basis by Rogers chairman Alan Horn.

“Following the transition, the board will look to Joe to take the company forward and continue the momentum we’ve established in the past couple of years,” Horn said in a statement.

“His focus on the customer experience and demonstrated expertise delivering operational success makes him well suited to lead Rogers through the challenges and opportunities ahead.

“During the transition, it’s business as usual.”

On the other hand, Rogers said its wireless operation — the main engine for its revenue and profit — had its biggest revenue growth and post-paid customer additions since 2010 with 114,000 net additions.

Revenue for the quarter was $3.49 billion, in line with analyst estimates and up three per cent from last year’s $3.38 billion. The only major division to see a decline in revenue was cable, which slipped to $865 million from $871 million.

The release of the third-quarter results on Monday was three days ahead of schedule. They had been expected before the opening of markets on Thursday.