The ruling comes shortly after Jeremy Desai, the man at the centre of the lawsuit, stepped down as Apotex CEO 'to pursue other opportunities' 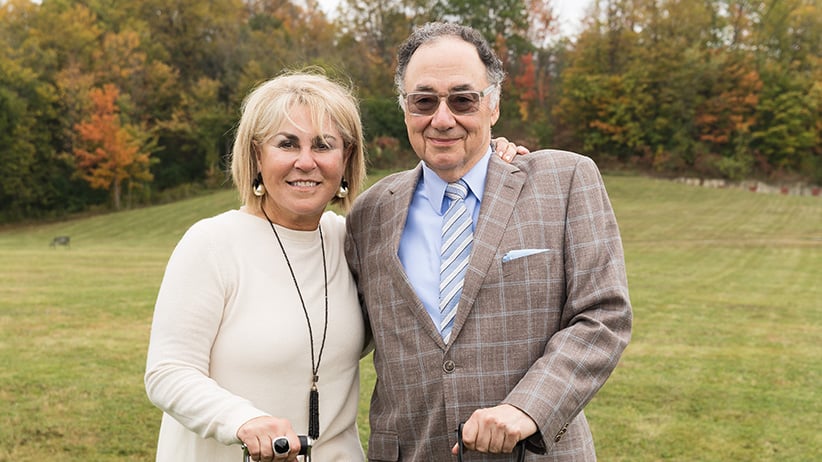 Honey and Barry Sherman breaking ground on the Sherman Campus at the UJA Federation of Greater Toronto, a campus named after them. (Photo by Liora)

A U.S. judge has refused to throw out a sensational lawsuit that accuses Barry Sherman’s drug company of using sex, lies and USB flash drives to illegally acquire valuable trade secrets from a rival pharmaceutical firm.

The ruling, released Tuesday, is the latest chapter in a bizarre legal saga that was thrust back into the spotlight last week amid news that Jeremy Desai—Sherman’s pick as president and CEO of Apotex Inc., and the man at the centre of the lawsuit—had suddenly resigned “to pursue other opportunities.” By chance, the company announced Desai’s abrupt departure just hours before Toronto police convened a press conference last Friday to reveal that Barry and Honey Sherman were indeed murdered, the victims of a “targeted” double homicide inside their north-end mansion.

The unusual lawsuit was launched last July by the U.S. division of Israel’s Teva Pharmaceutical Industries Ltd., the world’s largest generic drug-maker. Filed in Pennsylvania, the complaint alleges that Desai was involved in a “romantic relationship” with a senior Teva executive—a fellow Canadian named Barinder Sandhu—and that he induced his girlfriend to leak him highly sensitive Teva records, including “trade secrets and other confidential information.”

The FBI was called in to investigate Sandhu after she was fired in October 2016, but the U.S. Department of Justice decided last May not to pursue criminal charges. Teva filed its lawsuit two months later.

All the named defendants—Apotex, Desai and Sandhu—have fought back against the allegations, petitioning the court to dismiss the 11-count complaint because it is “woefully short” on specific details. The lawsuit “fails to describe the trade secrets and confidential information that Sandhu allegedly provided to Apotex,” company lawyers wrote in one filing. In another, they predict that “Teva’s litigation—like the FBI investigation Teva instigated—will prove to be a waste of time.”

But this week a judge sided with the plaintiff, ruling that the bulk of the accusations laid out in the 36-page lawsuit should proceed. “Teva has sufficiently alleged that Apotex, through its agent Desai, encouraged Sandhu to share trade secrets with them in breach of her known duty,” wrote Justice Timothy Savage, of Pennsylvania’s Eastern District Court. “At this stage, that is enough.”

The lawsuit is now at the discovery phase. According to court documents, both Desai and Sandhu were scheduled to be deposed this week at the downtown offices of a Toronto law firm.

Jordan Berman, an Apotex spokesman, says “out of respect for the judicial process, we do not comment on matters before the courts.” Contacted by Maclean’s, Desai’s Philadelphia lawyer, Barry Gross, said “no comment.” Lisa Matthewson, who represents Sandhu, has yet to reply to a request for comment.

Born in England, Jeremy B. Desai joined the generic drug giant in 2003, serving as Apotex’s global head of R&D, then as chief operating officer, before Sherman appointed him CEO in August 2014. A veteran of the pharmaceutical industry, he holds both a PhD and an MBA.

In the summer of 2016, two years after Desai assumed the helm of Canada’s largest pharmaceutical firm, an unnamed ex-employee approached Teva with a shocking tip: that Desai had obtained a highly sensitive Teva document from Sandhu and was sharing it in “roundtable discussions” with Apotex colleagues. According to the tipster, the document was a so-called “Complete Response Letter” from the U.S. Food and Drug Administration, detailing an application for a new generic drug identified only as “Product X.”

By then, Sandhu had moved from her home in Brampton, Ont., and was living in Wynnewood, Penn., earning an annual salary of $193,000 (U.S.) as Teva USA’s Senior Director of Regulatory Affairs. Although Desai owns a home in Toronto, Teva claims the two were in a “romantic relationship” and that he “resided and/or cohabitated with Sandhu” during that time.

Teva promptly launched an internal investigation, including a forensic examination of Sandhu’s company laptop. In a written declaration filed in court, the lead investigator said her team discovered that Sandhu had “emailed a variety of documents” to both Desai’s Apotex account and her gmail address. They also found evidence that Sandhu leaked “a highly confidential spreadsheet containing sales and profit analysis of nearly one hundred Teva USA products on the market.” All told, the investigator wrote, Sandhu uploaded at least 900 sensitive files to a cloud drive “that could be shared with anyone,” and copied records to 10 flash drives.

The lawsuit alleges that Desai and Apotex “acted willfully, maliciously, and with reckless disregard” for Teva’s rights, using the poached trade secrets to speed up the regulatory approval of a competing generic drug and inflict “incalculable financial losses” on their longtime rival. “Desai and Apotex chose to receive and utilize the misappropriated information and improperly maintains possession over this information to this very day,” the complaint continues.

None of the allegations has been proven in court, and statements of defence have yet to be filed. In previous court filings, Apotex has said the evidence doesn’t show that the company actually received any of the records Sandhu supposedly accessed. “Teva’s complaint lacks any sufficient factual basis,” Apotex lawyers wrote last August. “While the Complaint is long on rhetoric, it is short on actual factual allegations.”

Why Desai left his job so suddenly remains a mystery; in a prepared statement last week, Apotex would only say his resignation was “effective immediately” and that “we thank Jeremy for his contributions and wish him success in the next phase of his career.” Berman, the company spokesman, told Maclean’s today that “the announcement of Jeremy’s resignation and the police update of the same day are completely unrelated. Dr. Desai’s resignation is in no way connected to the death of Dr. Sherman.”

When Sherman was alive, Desai appeared to enjoy a close relationship with the company founder and chairman. In fact, as The Globe and Mail first reported last week, it was Sherman who provided the mortgage for the upscale Toronto home that Desai and his wife, Kalpna, purchased when they first moved to Canada in 2003. The loan document, filed at Toronto’s land registry office, shows that Sherman lent the couple $3.15 million—at zero interest, and without a regular payment schedule. The mortgage is due “on demand,” records show, and 15 years later no discharge has been filed, suggesting the loan remains outstanding.

Kalpna Desai, who holds a PhD in biochemistry, is listed as director of clinical programs at Florida-based Apobiologix, part of the Apotex Group of Companies. It is not clear whether she still works for the private company now that her husband is out as CEO. Said Berman: “Out of respect for the privacy of all employees, as a private company we do not share the list of employees who work for us.”

Barry and Honey Sherman were last seen alive on the evening of Dec. 13. Two days later, the couple’s real-estate agent discovered their bodies near their indoor swimming pool, with belts wrapped around their necks and attached to a poolside railing. Although police have revealed few other clues, Detective Sergeant Susan Gomes told reporters that all the evidence points to a double homicide—and that the Shermans “were in fact targeted.”

A billionaire businessman who never shied away from a costly court battle, Sherman spent his career clashing with corporate competitors, government regulators and even his own cousins, who claim they are owed a portion of the Apotex fortune. Sherman had no shortage of enemies, in other words. In 2000, he told American author Jeffrey Robinson that he wondered why none of the big pharma companies had tried to kill him yet. “The thought once came to my mind, why didn’t they just hire someone to knock me off,” he told Robinson, for his book Prescription Games. “For a thousand bucks paid to the right person you can probably get someone killed. Perhaps I’m surprised that hasn’t happened.”

On Wednesday, one of the cousins locked in a decade-long legal battle with Sherman broke his silence—telling both The Daily Mail in Britain and The Toronto Star that he doesn’t believe the deaths were a double homicide. Kerry Winter claims that Barry twice asked him to kill Honey, and that he remains convinced the crime was a murder-suicide. Friends and family of the late couple have called his claims “outrageous” and “disgusting.”