A solution to one of modern life’s most vexing problems: getting the last bit of ketchup out of the bottle 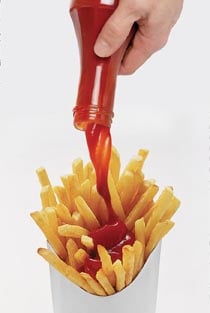 The humble ketchup bottle is a food-packaging icon. With its thin neck, metal cap and eight-sided body, the glass bottle developed by H.J. Heinz in the 1890s remains a cultural touchstone even though most ketchup is now sold in squat plastic containers.

But even icons have their flaws. Though initially designed to be practical—the bottle’s clear glass allows consumers to see the condiment’s freshness, while the thin neck helps slow oxidization—consumer preference for thicker ketchup meant the slender bottles soon became an exercise in frustration. Even constant evolutions of the bottle, including the most recent upside-down models, didn’t fully solve the problem of how to easily get all the ketchup out of the bottle.

So after more than a century of consumers banging, slapping and prodding their ketchup bottles with a knife, researchers at the Massachusetts Institute of Technology think they have the answer. They unveiled a high-tech coating earlier this year called LiquiGlide that allows ketchup and other viscous condiments—from mustard and mayo to salsa and steak sauce—to slide easily out of a tipped bottle, like ice cream off a warm spoon. It’s just one example of how the food-packaging industry is suddenly going through a period of rapid innovation—much of it driven by nanotechnology, which is the manipulation of matter on a molecular scale. “Food packaging research with nano-materials has exploded over the past decade,” says Loong-Tak Lim, a professor in the University of Guelph’s department of food science.

Though its inventors claim LiquiGlide is not technically a nanotech product, the definition of which can sometimes be a bit fuzzy (it generally refers to the use of particles thinner than 100 nanometers), Lim says there are several familiar examples—like the inside of a potato-chip bag. “It looks like aluminum foil, but it’s not,” he says. “It’s actually a plastic material that’s coated with a thin layer of aluminum deposits. And that layer is about 20 to 30 nanometres thick.”

Much of the nano-level research in food packaging focuses not on convenient pouring, but on finding ways to keep food fresher, longer. And that means keeping air out. “It’s about extending the shelf life of the product, which means you can ship it farther away,” Lim says. Areas of particular interest for researchers include embedding enzymes that can scavenge for oxygen and bacteria and the use of silver nano-composites to kill micro-organisms.

Nano-particles can also be used as sensors to detect when food is spoiling and change the exterior colour of a package to warn consumers. Lim pointed to a New Zealand company that enclosed pears in nano-sensor packages. The label indicated the fruit’s ripeness. The idea, he says, was to stop shoppers from handling pears in the store, leaving them bruised and unsellable.

Public acceptance remains an issue. As was the case with genetically modified foods, consumers are concerned about the possible health effects of nano-particles—a fear that’s not entirely unwarranted. Lim says some substances normally considered safe can be harmful to humans at the molecular level. The U.S. Food and Drug Administration earlier this year issued draft guidelines that covered the use of nanotechnology in foods, while Health Canada is evaluating new approaches on a case-by-case basis.

For its part, Heinz won’t say if it’s considering adopting LiquiGlide or any other new packaging technologies, including nano-materials. “We love the idea of making it easier to pour out Heinz ketchup from the bottle, and we’re always exploring technologies like this to help enhance the overall consumer experience,” says Joan Patterson, a spokesperson for Heinz Canada. She adds that Heinz views packaging as “a way to differentiate and build brand equity,” but that consumer acceptance is key.

Heinz has already adopted a number of key changes to its ketchup packaging over the years. From the plastic squeeze bottles introduced to Canadians in 1985 to the upside-down bottles that arrived in 2003, the new designs made storing and dispensing ketchup faster and more convenient. Not surprisingly, they also encouraged consumers to use more ketchup.

The latest effort, unveiled in Canada this year, may not be nanotech but it certainly qualifies as revolutionary in the minds of consumers: single-serve “dip & squeeze” ketchup packets. The individual tubs are three times as large as existing packets, and allow the ketchup to be squeezed out one end, or the top peeled back for dipping. Heinz called it “the most significant packaging innovation for the ketchup packet in more than 42 years.” However, judging by the research now taking place, the next big leap forward is likely to come a whole lot quicker.

Here’s Jared Weiner, futurist with Weiner Edrich Brown (WEB), on another innovation: how 3D printing will effect just about everything you buy and eat: