Kiip your eyes on this tech startup

It's a different kind of mobile advertising 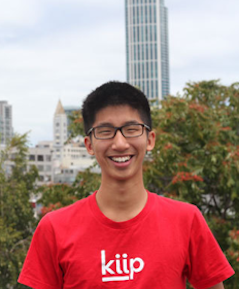 Not long after being laid off in June 2010 from his job at social news website Digg, Brian Wong was on a long-haul flight passing through Southeast Asia when he had his great idea.  He looked around and was struck by how many people were enjoying themselves with games on their mobile phones or tablets. It was no new insight to recognize that mobile gaming could be monetized, but the problem was the current state of mobile advertising was, as he describes it, “in a state of absolute disrepair.” Mobile ads were typically tiny, in-your-face reproductions of desktop banner versions.  “It was annoying and just really counterproductive,” he says.  Wong’s trick is to capitalize on what he calls “moments”—those times where players are enjoying accomplishing something in a game.

“That’s when I was like, that’s really exciting and there’s already millions of people playing these things, getting these moments. And no one’s doing anything with these moments. What if we could reward people in these moments? What if we could make the most out of the fact that you’re happy and actually augment that happiness by bringing brands in to reward you? Then it hit me that this shit was going to blow up!”

Such was the extemporaneous beginning of Kiip (pronounced “keep”), a little startup headed by a Canadian whiz kid.

Wong is the kind of young guy who’s so smart and self-confident, he makes you say “huh.” Not huh with a question mark. Just huh. Along with co-founders Amadeus Demarzi and Courtney Guertin, at 21 he’s running a successful business that integrates rewards into mobile games. To start he got $300,000 from True Ventures and some angel investors. Then in April 2011 he got another $4 million from Hummer Winblad and True Ventures, followed by $11 million in a second round in July 2012, led by Canadian VC Relay Ventures.

It’s perhaps what you’d expect from a kid who skipped four grades, two in elementary and two in high school, and graduated from the University of British Columbia four years early at 18.

And yet Wong, born and raised in Vancouver, still manages to project a bit of the down-for-whatever slacker vibe more commonly associated with whatever generation came after yours. He likes to go into VC pitches “completely unprepared,” for example. “My superstition is that if I over-prepare for a meeting I usually don’t do well in them,” he says. “I’m a very improvisational type of guy. I fly by the seat of my pants—I’m just really good at that. In many ways being younger didn’t phase me at all, mainly because I had no other choice. When you have no job and you have nothing to lose it’s pretty easy to walk into these things and be like, whatever.”

How Kiip works for the end user is simple: people playing mobile games are offered tangible rewards or virtual currency at random times for their virtual accomplishments. The business model is also relatively straightforward: the brands fund the rewards and Kiip shares revenue with the game or app’s publisher or developer as incentive for the latter to integrate Kiip. The startup has a variety of notable companies on board, including 1-800-Flowers.com, American Apparel, Procter & Gamble and Sony Music. It works with about 30 brands in all.

One of Kiip’s first advertisers was new snack food company Popchips, which makes a kind of potato chip that is neither fried nor baked. Says Brian Pope, chief marketing officer, “We were interested right away in the idea of reaching that mobile consumer, that gaming consumer, in the middle of an experience that they were passionate about. It was just one of a number of ways that we’ve tried to align the brand and introduce it within a lifestyle moment. So we right away recognized the power of what they were building and decided we’d run a test and see how it worked.”

So far, so good, apparently. While Pope declined to reveal the exact marketing spend and put it under six figures, he says the campaign, which has been running periodically since the summer of 2011, is accomplishing the company’s goal of building brand awareness. “The usual way that you look at this is, OK, you reached X number of people and this percentage of them engaged and it’s all very dry statistical information. And we look at that just like any brand does and those metrics have been good, but where you really find that you’re onto something special is when you look at the conversations that are happening outside of the game on Twitter and on other forms of social media. And you can watch it as these things are happening. You can see the conversations that people are having.”

Where it ultimately counts, it’s working for Kiip as well. Wong describes revenues as in the high seven figures and says revenue growth is up 1,000% from 2011. He adds that Kiip is trying to “aggressively grow,” which is the reason for pursuing more capital. The team currently numbers 30 people spread out across the San Francisco headquarters, New York City, Los Angeles and Chicago, up from 10 staff at launch in April last year. In July the company also announced a customer-facing app called Kiipsake, which is a digital wallet consumers can use to store and redeem rewards earned from Kiip-enabled games and apps.

All of this is being done while trying to simultaneously educate clients on both sides of its business about why anyone should get excited about yet another “paradigm shift” in an online space where someone’s almost always hawking the next big thing. Lars Leckie, managing partner at Hummer Winblad, works directly with Brian. He says Kiip has created an entirely new ad unit and that comes with challenges in the short to medium term. “They’ve got to convince both the publishers and they’ve got to convince the advertisers and reward providers that this model works. To prove that that works you’ve got to get both sides of the equation up to scale. I would say we’re doing fantastically well but we’re still in the early days.”

At the time Kiip received its first round of VC funding, Wong was possibly the youngest person ever to do so although he says his record has since been “pummeled by, like, 40 other kids.” His youth was apparently no deterrent to his first partners and it hasn’t been one to Relay Ventures either. “We are focused on intellectual capacity, energy, excitement and experience of the entrepreneur,” says Kevin Talbot, co-founder and managing partner, via e-mail. “Finding the right balance is key. Then you look at the opportunity—market, technology, and competitive differentiation. In Brian’s case there was a unique (incredible) idea, a very smart and intellectually honest entrepreneur and a huge amount of energy. They had some early demonstrated traction as well.”

The current stage in the company’s growth is where Wong’s leadership abilities will be increasingly tested as he deals with the less glamorous aspects of startup life. At the moment the greatest challenge is finding and hiring the right people and, as public companies know very well, stock rises and falls with changes in key personnel. Getting this part right is going to be crucial to Kiip’s future.

Says Wong, “The earlier challenges were sort of partner buy-in and getting our name out there and things like bonus structures for our sales team, structuring our revenue share model and putting together all the default paperwork for how we would build out our streams of relationships, so to speak. Now it’s just hiring and building out the company and scaling it. And especially when you have an entirely new business you create, you’re inventing roles sometimes that never existed before. So how do you hire someone to fill a position that no one will ever have in the world?”

And while Wong credits himself as Kiip’s “designer,” now that the product is in market his role is more of a manager’s. Whether or not a 21-year-old has the maturity for this is something only the future will reveal, but he’s certainly got the right attitude. He says he’s been a little surprised at how much time he has to spend managing the company’s culture. “Some people call it HR, some people call it organizational behavior. All it really is is you being a coach to your team, being around them a lot, sharing thoughts, helping enable them. As an entrepreneur you’re so obsessed with building a product, but then once you build it, the next product you’re actually building is the people in your company. And that’s something you realize over time and it becomes a core part of your responsibility as a CEO.”

Talbot says he’s been most impressed by Brian’s willingness to learn: “He has great intuition and follows this extremely well, but he also isn’t afraid to say or admit that he doesn’t know something and then he will go out and become an expert (or seek out expertise and best practices). Sometimes knowing what you don’t know is the most important skill a leader can have. Brian is also a great motivator and cheer leader for his team. This makes him a great recruiter, fund raiser and strategist.”

You typically have to wear several hats simultaneously as a startup CEO and Wong is no exception. He’s already developing a growth strategy to achieve long-term goals, which include building the brand so that consumers have an awareness of it before ever redeeming a reward, and introducing Kiip into other activities beyond games, such as fitness.

“We realized late last year that moments in games are not really the only place where you’re happy,” he says. “You can run eight miles, map your run and be really stoked, or finish a recipe in Jamie Oliver’s recipe app or whatever it may be. So the opportunities are endless. These moments can be anywhere and so when you start thinking about it that way Kiip becomes a rewards layer for the world. To build that out takes a lot of discipline and a lot of people, capital and everything. So that’s really what we’re thinking about as we continue to grow right now.”

There are no other companies doing exactly what Kiip does but there are ad networks that compete in the same market. While that could be cause for concern, others see it differently.  “It’s a crowded space with a lot of players because nobody’s solved it yet and that says opportunity,” says Jen Evans, CEO of Sequentia Environics.  What Kiip does is less like advertising and more like content provision, she explains, and viewers are more inclined to be receptive to the latter. With smartphone adoption and use skyrocketing, a tipping point is coming. “We may not see it actually manifest for the next two to three years in full flower, but there’s no question there’s a lot of money to be made there.”