In efforts to boost advertising revenue, the social networking site finds itself alienating many of the people it needs most 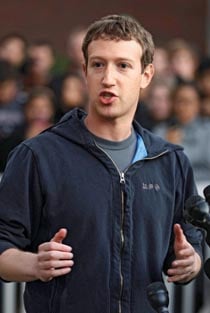 Facebook’s latest tweak drew a predictably negative response from users. The popular social networking site now automatically creates a “couple’s page” for any two users who declare themselves in a relationship with one another. Facebook includes relevant photos, status updates and back-and-forth conversations. It’s all information users have already agreed to share, but in a new and sappier context. Critics described the move using words like “retch,” “cringeworthy” and “way off the mark.”

It’s become a familiar dance: each time Facebook launches a new feature or changes an existing one, users complain it’s not what they signed up for. And now, eight years after Mark Zuckerberg created the site in his Harvard dorm room, deep-pocketed advertisers are also learning how it feels to be subjected to Facebook’s tinkering. Mark Cuban, the billionaire owner of the Dallas Mavericks basketball team, recently took issue with Facebook’s efforts to suddenly charge the team thousands of dollars to reach fans of the Mavericks’ Facebook page. “FB is blowing it? This is the first step,” Cuban wrote in a post on Twitter, threatening a boycott. “The Mavs are considering moving to Tumblr or MySpace as primary site.”

The high-profile criticism comes at a time when Facebook needs paying customers like Cuban more than ever. With its stock still trading nearly 40 per cent below last spring’s IPO price of $38 (it has been as low as $17.55), investors are searching for evidence that Facebook will live up to its promise of being an unparalleled online money-maker. A key concern has been the growing number of users who access the site from their smartphones or tablets, where Facebook has historically had no room to place advertising because of the small screen sizes.

Facebook appears to have finally figured out a solution: beaming ads directly into users’ news feeds, which are front and centre on mobile devices. The Menlo Park, Calif., company said 14 per cent of ad sales, or $140 million, were on its mobile platform in the third quarter, up dramatically from an estimated $45 million in the three months prior. Even though Facebook posted a loss of $59 million, investors were so heartened by the shift to mobile that its battered stock managed to withstand a flood of 850 million shares hitting the market last week as another post-IPO lock-up for insiders expired. “I want to dispel this myth that Facebook can’t make money on mobile,” Zuckerberg told analysts on a conference call. “This may have seemed true earlier this year because we hadn’t started trying yet.”

There’s still a long way to go, however. Facebook’s investment bankers valued the company in excess of $100 billion, compared to the $51 billion valuation the market has currently assigned to the stock. And, as Cuban’s Twitter rant suggests, Facebook’s full-court press to make money on mobile devices risks not only alienating users, but important advertisers as well.

The core issue is that a user’s news feed has suddenly become an extremely popular piece of real estate. It relays what friends are doing, displays recent photos and passes along event invitations. It’s also increasingly full of advertising. “Sponsored stories,” for example, appear as links to commercial “pages you may like.” The ads usually steer users to pages that have been “liked” by their friends, giving them what Facebook calls a “social context.”

In an effort to minimize the clutter, Facebook uses complex software algorithms to determine what users actually see. And that’s where confusion—and controversy—has crept in. Unlike paid advertising, Facebook has never guaranteed that a post by, say, Red Bull will be seen by all of the 33.6 million users who have clicked “like” on the energy-drink maker’s Facebook page, particularly those who promptly forgot about it. (The same goes for updates from friends you never interact with). It’s not unlike the way Google filters search results depending on the location of the user and previous search history. As a result, Facebook says brands can only expect to reach about 16 per cent of their followers when they post a page update, although it varies depending on the response a post receives from friends and friends of friends.

For brands that want to reach more followers, Facebook now offers the option of paying for a “promoted post,” which guarantees delivery to a minimum number of users. Cuban, for example, says he was told he could reach one million Mavericks fans for $3,000. By contrast, a regular post by the Mavericks could be expected reach only about 368,000 of the roughly 2.3 million users who follow the team on Facebook. A tech entrepreneur himself, Cuban criticized Facebook’s approach in an interview posted on the website ReadWrite. “Remember, most brands don’t have social media departments,” he said. “They rely on common sense. If someone likes your brand, it seems like common sense to me that you can expect your posts to reach 100 per cent of those that like your brand.”

A decision by Facebook to update its software algorithms in September further muddied the waters. Some suggested Facebook was deliberately reducing the reach of brands to force them to pay up. But Facebook says the update was about reducing spam. “We did not introduce these changes to news feed to incentivize users or businesses to use promoted posts,” Facebook said in a statement provided to Maclean’s. Facebook officials say that the “median reach” of brand posts hasn’t changed. It’s still around 16 per cent, although the number of posts being reported as spam has dropped.

Some analysts believe Facebook is doing a good job balancing the competing priorities of users and advertisers. “Facebook has cracked the mobile code,” wrote Victor Anthony, an analyst at Topeka Capital Markets, in a recent note to clients. He predicts mobile ads will constitute half of Facebook’s ad revenue in just two years and suggested they actually perform better than those on its traditional website. “Given that the user is focused on the news feed, you are almost 100 per cent guaranteed they will see your ad, since the ad is part of the content,” Anthony said in an email. “That has value to advertisers and they are willing to pay up for that guarantee.”

But, like users, brand marketers don’t like feeling as though the rules of the game are being changed behind the scenes. Veronica Holmes is the president of Toronto’s ZenithOptimedia Digital, an ad-buying agency. She understands that Facebook needs to prevent the site from becoming unwieldy, but argues that marketers have invested considerable time and energy into building Facebook audiences. They want to be able to capitalize on those relationships. “I would like to see Facebook posts reach more fans of a brand than 16 per cent,” she says. “I find that really low.”

At least one Facebook analytics company argues that marketers are getting a pretty good deal—particularly considering that brand pages are free to set up in the first place. Brendan Irvine-Broque, the director of growth at PageLever, wrote in a recent blog post that Cuban’s Mavericks are only paying about one-third of a cent to reach an individual fan through a promoted post. “Is it not worth paying $.003 per fan to remind them to buy tickets?” he asked.

Cuban, though, is not taking issue with the cost, but the complexity of determining who advertisers are actually reaching on Facebook in the first place. A better approach, he says, is to charge marketers a flat fee and then guarantee that everyone who follows a brand actually receives the brand’s updates. That way marketers will know what they’re getting for their money, he says. Companies “shouldn’t have to go to great lengths to figure out the nuances of Facebook audience reach,” Cuban told ReadWrite. “That complexity will come back to haunt Facebook.”