The (marketing) Force Awakens: Luke ... I am your PopChips™

There’s grapes, and then there’s ‘Yoda grapes’ brought to you by Disney. Scott Feschuk on the preposterous branding around Star Wars 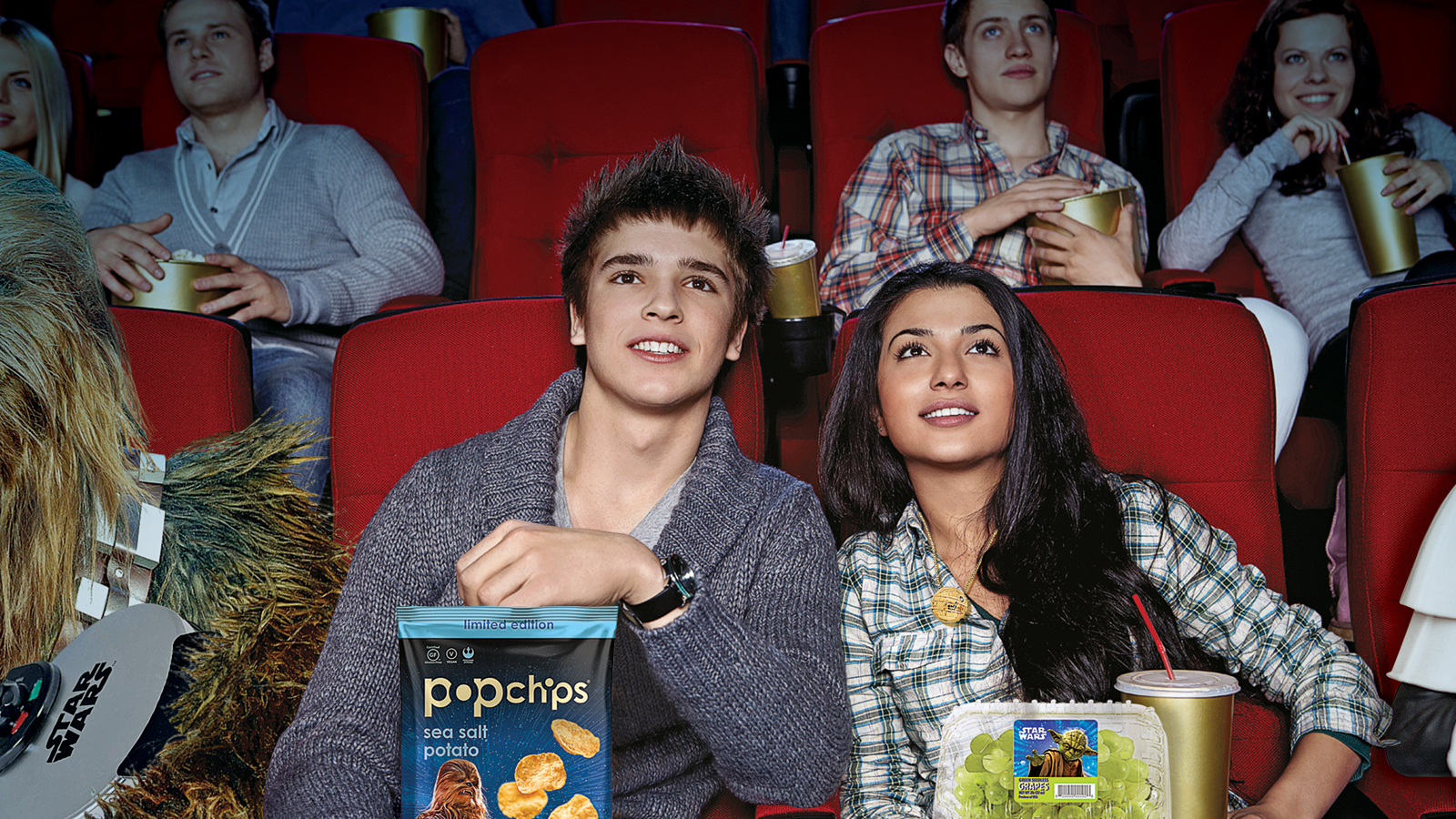 Walk into a retail store these days and you’ll notice three things:

2. Cashiers preparing to hang themselves with garland rather than endure the 18,000th playing of Santa Baby.

With The Force Awakens opening next month, the tie-ins are arriving at hyper-speed: from a $1.49 box of Kraft Dinner with noodles shaped like C-3PO’s head to a $5,500 Millennium Falcon bed from Pottery Barn that’s available only for kids because stupid Pottery Barn doesn’t care about my happiness. You can even spend $500 at Kay Jewelers to give your sweetheart a 10-karat-gold necklace featuring the Death Star, which is great if you’ve been looking for a way to celebrate your love through an instrument of planetary genocide.

Almost every product known to capitalism is now associated with Star Wars—including lipstick, waffle-makers and fruit. Last month, Disney announced the release of  “Yoda grapes and Darth Vader apples.” The company isn’t clear on what distinguishes them as “Yoda grapes.” Maybe these grapes lead to cantaloupe. Cantaloupe leads to honeydew. And, as we all know from personal experience, honeydew leads to suffering.

The best part of the press release touting the Star Wars produce was the revelation that Disney employs a man with the job title “Vice President of Licensing, Consumables.” It’s enjoyable to picture him travelling at night from restaurant to restaurant, giving dinner plates the once over and badgering people: “That pizza slice resembles a Star Destroyer. You owe Mr. Disney a buck fifty.”

The only industry immune to Star Wars merchandising appears to be pharmaceuticals, which is a shame, because The Force Awakens Viagra would have sold through the roof. It’s easy to picture the commercial:

Open on Luke using his mind to throw a football through a tire swing.

Voiceover: As a Jedi gets older, he may no longer be able to “bulls-eye womp rats” like he did when he was young. You can’t see me, but I winked at the end of that last sentence. Anyway, even one strong with the Force is liable to have his lightsaber go on the fritz. Wink. That time, I just said “wink” out loud.

Cut to Luke and R2-D2 playfully washing a car together.

Voiceover: Consult your Jedi master if you experience a four-hour erection caused by your sister.

Even by modern standards of shamelessness, many of the movie tie-ins seem desperate—as though there were a great disturbance in the marketplace, and millions of CEOs suddenly cried out: “Tangential association with something successful will save us!”

To better understand this mindset, let’s fake-travel inside the boardroom at Popchips Inc., an actual snack-maker that just unveiled a new line of Star Wars-themed packaging. The CEO is joined by his top 24 vice-presidents and Jenkins from marketing.

CEO: It’s decision time. Walk us through the details one more time, Jenkins.

Jenkins: Sure thing. First, we’ll put images of Star Wars characters and spaceships on our bags. Then we’ll watch the cash roll in.

Jenkins: Let me put it this way: Do you know what a picture of Chewbacca on a bag of Popchips says to people?

VP 18: That they’re about to get hair in their teeth?

Jenkins: I just paid for a four-hour lunch with the creative director of our ad agency, and the one thing I remember her saying is: “Popchips and Star Wars share a narrative, and also please sign this piece of paper approving a wildly expensive TV ad campaign.”

Jenkins: Are you suggesting that someone in advertising would exaggerate?

VP 22: So wait, aside from the Star Wars theme, there is literally nothing different about the product? People aren’t going to buy a snack just because it has a cute robot on it.

[There is a long silence.]

Jenkins: What if we put the words “Limited Edition” on the top of the bag?

Applause and a gourmet lunch ensue.

Disney VP of Licensing, Consumables: Excuse me, that rib-eye resembles the shape of Han Solo’s head . . .