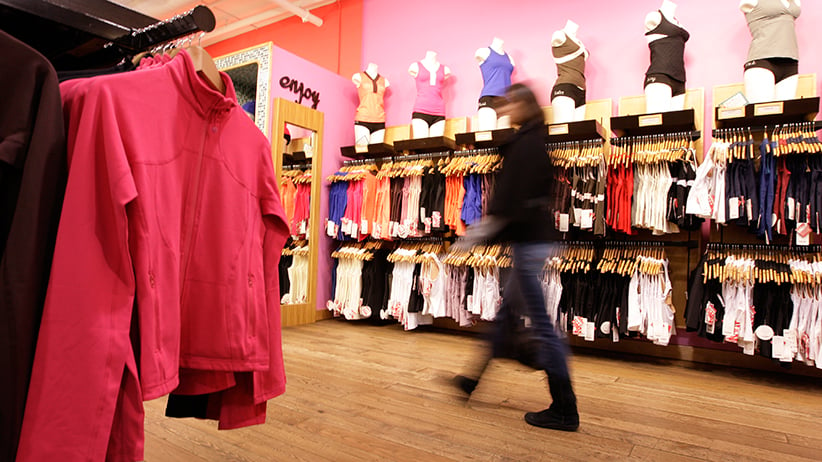 Updated Aug. 7, 2014: Chip Wilson, the founder and largest shareholder of Lululemon Athletica, has sold half his stake in the yoga-wear retailer for US$845 million. The Vancouver-based company said the sale to private equity firm Advent International represents approximately 13.85 per cent of Lululemon’s outstanding shares.

Yoga is about mindfulness—the pursuit of mental clarity and a spiritual life. B.C. apparel firm Lululemon Athletica has traded on that ideal for years, earning fans not just for its high-end athletic wear but also for its commitment to yoga’s high-minded principles. This is, after all, a company that hawks not sweaters, but “enlightenment pullovers.” It also writes its corporate manifesto—a word map of idealistic aphorisms—on its shopping bags, with this statement at the centre: “friends are more important than money.”

That serenity stands in stark contrast to the corporate slugfest now playing out over the fate of the company. In June, Lululemon founder and former CEO Chip Wilson went to war with its board of directors, announcing he would use his 27 per cent stake in the company to oppose re-election of two board members, Michael Casey, a former Starbucks executive, and RoAnn Costin, president of a private equity firm. Never mind that Wilson left the company in ignominy in 2013 after a tactless comment that some women’s bodies “just actually don’t work” for Lululemon pants. The re-election of the board, Wilson warned, would result in Lululemon sacrificing its “product, culture and brand and longer-term corporate goals” for “short-term results.” Judging by comments on Lululemon’s blog, a great many dissatisfied customers agree.

Wilson lost that battle—Casey and Costin were re-elected. But he got his point across. “Our parents are fighting, and it’s awkward,” said current CEO Laurent Potdevin.

Such fights for the heart and culture of companies are becoming more common in an era when social media has made it incredibly easy for customers to engage directly with businesses, and when those customers increasingly define themselves by the brands they embrace. Where that runs into trouble is when those ideals clash with the expectations of shareholders for higher profits and quick returns.

Lululemon is just the latest company to be accused of selling out the core principles that earned it grassroots support in the first place. In March, the cosmetics maker Tarte—founded in a New York City bedroom with a commitment that its products would be environmentally friendly and never tested on animals—was acquired by Kosé, a Japanese cosmetics giant that tests on animals. Meanwhile, the virtual-reality innovator Oculus VR paid for the initial development costs of its headset with one of the most robust crowdfunding campaigns ever, in 2012. Offering everything from T-shirts to prototypes of the technology to visits to the company’s headquarters—though no actual equity—Oculus hit its $250,000 goal in just four hours before going on to raise $2.4 million in total, with a promise to “change the way you think about gaming forever.” That do-it-yourself attitude earned it an army of loyal adherents. Four months ago, Facebook swept in and bought Oculus for US$2 billion, sparking outrage from those crowdfunders who were upset to see the company swallowed by a social media giant.

These are the challenges companies face when customers are so loyal they come to feel the business is theirs. “You love [to have devoted customers], but it can be a two-edged sword,” says Karl Moore, an associate professor at McGill University’s Desautels Faculty of Management. “You have less freedom to change without alienating key people who may be evangelical in one sense, but also can be your worst, loudest critics.”

Such critics do more than complain; they can also impact the bottom line. Until recently, Lululemon had managed to balance culture and profit, says David Hannah, an associate professor at Simon Fraser University’s Beedie School of Business, who has studied and taught the company’s business model for years. “What’s particularly interesting about Lululemon is that it’s a capitalist success story—it’s a company that’s grown and made its founder a heck of a lot of money, but it has done so keeping up this image of being very connected to the community.” But the company has clearly stumbled. Lululemon’s once-hot stock price has plummeted, falling 45 per cent since last autumn on weakening sales. In the comments to a 2013 blog post where Lululemon fessed up to a quality-control problem with its luon yoga pants, which made them appear see-through, users raged against the company they had felt such affection for. “I’m losing my allegiance to the only brand of athletic wear I felt I had a personal relationship with,” wrote one user. In June, in response to a post showcasing looser-fitting patterned summerwear, an effort to sell its athletic gear as street fashion, customers were incensed: “Lulu was special because it had it all—great beautiful designs, high-quality fabrics, wonderful figure-flattering fits. No more.”

What Wilson appears to be trying to pull off, with his appeal to Lululemon’s lost culture, is a repeat of Howard Schultz’s much-heralded return to Starbucks after several years away from the CEO’s job. It was a time during which the company expanded rapidly yet faced complaints from diehard latte sippers that the coffee chain had lost its way. In a leaked email to senior executives in 2007, Schultz slammed the “commoditization of the Starbucks experience” and grieved the loss of the “romance and theatre” of its coffee-grinding baristas, having moved to automated espresso machines. The next year Schultz reclaimed the helm; since then, Starbucks shares have tripled in value.

But if Wilson is upset that Lululemon has lost its way, he only has himself to blame. After all, he could have kept it private and grown the company at a slower pace and kept full control over its culture. Consider Edmonton-based Running Room, a chain similar to Lululemon. Both are devoted to a particular fitness regime, with communal workouts and loyal customer bases. But in staying private, the Running Room has taken 30 years to grow to 114 locations, whereas Lululemon’s 2007 IPO gave the company, then just seven years old, the funds to mount a hyper-expansion and more than quadruple its store count to 263. The IPO also made Wilson a billionaire; according to the latest Rich 100 ranking from Canadian Business, Wilson is worth $3.7 billion. So Wilson’s complaints strike a false note. “If you go to the investment bankers and say, ‘We want to go public, sell this to the public for the highest possible price,’ ” says Roger Martin, the academic director of the University of Toronto’s Martin Prosperity Institute, “then you forfeit, in my view, the right to say, ‘We don’t want to do this or that because it’s not consistent with the ethos or community spirit of the company.’ ”

With a booming IPO market and investment bankers courting fast-growing, private companies, it’s a challenge more businesses will face. Take New York-based Etsy, for example. The company was founded in 2005 as an online market for artisans to sell handmade wares. More than just an e-commerce site, Etsy bred a “maker culture” among its loyal community of users, who sold more than US$1 billion of jewellery, clothing and housewares last year. But Etsiers are upset by the company’s efforts to scale up its business amid rumours of an IPO. Many are disillusioned by changes to Etsy’s terms and conditions that allow vendors to outsource production to third-party manufacturers because, they say, it undermines the concept that all products on Etsy are handmade and gives an unfair advantage to those able to contract out to factories. Those controversies spawned a satirical blog-turned-book, Regretsy, which for a time ran a regular feature cataloguing items that were mass-produced.

Chad Dickerson, Etsy’s CEO since 2008, has had to try to convince vendors this is an effort to give them more opportunities. But he understands the fear in the community. “We live in a world where, for many people, everything they’ve grown to love got ruined at some point.” He still seems intent on an IPO, though: “We’ve decided no IPO this year [but] we may decide at a later date.”

As for Lululemon, it’s unclear what’s next, though going private may lie in its future. It’s been reported Wilson is in talks with private equity funds about buying out shareholders and delisting it from the stock market. That at least made shareholders happy—Lululemon’s stock price soared after the news.