Luxury home sales are down in Canada

It's a buyer's market, unless you're in Calgary

Bad news if you’re in the market to sell off some high-end real estate. It’s officially now a buyer’s market for luxury homes in Canada, according the latest update released today on sales of million-dollar homes from Sotheby’s International Realty Canada.

Overall sales of luxury detached homes were flat or down significantly in most of the major markets in the first half of 2013 compared to the same time last year. Sales of high-end homes were down about nine per cent in Vancouver and about six per cent in Toronto. They were flat in Montreal. Only Calgary saw a significant uptick (15 per cent) in sales of homes over $1 million: 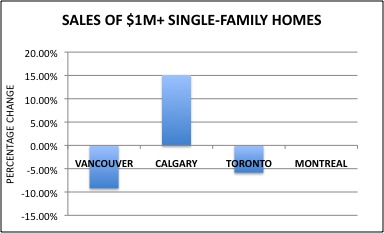 The number of days high-end homes sat on the market before finally selling also crept up in most cities. It was most dramatic in Vancouver, where the listing time before a sale rose 57 per cent. It jumped 37 per cent in Montreal, where it now takes on average more than four months to sell a million-dollar home and close to six months to sell a high-end condo.

Listing times crept up slightly in Toronto and fell in Calgary. (Note: The Southeby’s report doesn’t contain this data for Toronto. The calculations here are taken from the Toronto Real Estate Board’s monthly reports and compare year-to-date sales in June 2013 to June 2012. We calculated an average based on sales of detached homes in neighbourhoods of the city where the average selling price was over $1 million): 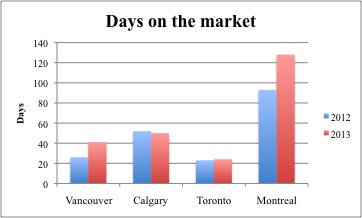 Prices are also softening for high-end homes, with fewer homes selling for over asking price. That’s a reflection of fewer buyers in the market for seven-figure homes. Even in Calgary, where the luxury home market seems to be heating up, buyers are still able to drive a hard bargain: 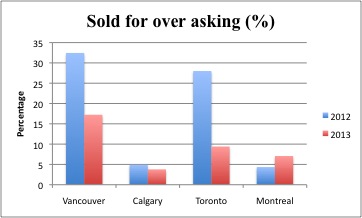 The market for high-end homes is calming down from buying frenzy of last two years. That’s a good thing for buyers in the luxury market since they typically take as much as six months to research a multi-million dollar home purchase, says Ross McCredie, head of Sotheby’s Canada. “People that are buying that were a little bit freaked out maybe last year and the year before now have the confidence to start writing cheques for above $4 million.”

The full report is here in PDF.