And Canadian companies know it

What sends companies on a shopping spree? Apparently, the same thing that would have most of us lining up around the corner, wallet at hand: Great sales on trusted brands.

According to research by accounting giant PricewaterhouseCoopers, Canadian companies have been buying like mad in Europe lately. The trend started after the credit crisis, but between April and June of this year Canadian acquisitions in the crisis-battered continent reached a whopping $15.1 billion. That was nearly 70 per cent of $21.8 billion Canadian businesses spent taking over foreign companies during that period, which PwC calls “one of the highest outbound tallies on record.” Check it out: 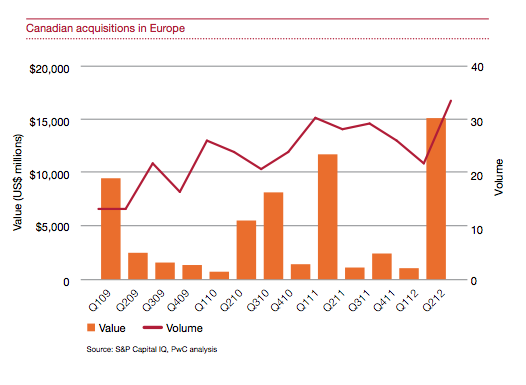 Among the notable deals, PwC’s report (opens PDF) cites the U.K.’s business and technology service company Logica, Germany’s OGE, the owner and operator of a gas transmission network, and Statoil Fuel & Retail, which is, I am told, Scandinavia’s No. one convenience and fuel retailer. Sure, none of these are flashy headline grabbers, but in terms of deals values they were significant.

Vanessa Iarocci, director of national strategy and operations, deals at PwC calls this kind of buying “very opportunistic.” Canadian companies, she says, are snatching up European businesses they think are undervalued, especially in countries like the U.K. and Germany, which have suffered from the euro zone crisis but aren’t at its epicentre. These two countries alone accounted for 55 per cent of Canada’s outbound M&A value in Q2 this year. The U.S. by contrast made up only 15 per cent of the total values of the deals, though it still ranked first in terms of volume. Other great buys in the Old Continent, according to Iarocci, lie in eastern Europe, which is poised to post relatively healthy grow despite the mayhem around it.

Shopping strategies seem to vary (this also opens a PDF), with some Canadian companies going for a “bottom-up” approach, that is, looking all over for European companies that represent the best deals; and others adopting a “top-down” view, i.e. identifying a “safe” countries first, and then looking for opportunities there.

Across the board, though, the flurry of purchases on the other side of the Atlantic stood in sharp contrast with the anaemic state of Canada’s domestic M&A activity, whose value and volume readings were down 14 and four percent respectively between April and June of 2012 compared to year-ago levels. Putting cash into promising foreign businesses is one way in which Canadian companies are trying to escape low rates and slow growth in North America, Iarocci notes. Europe still looks safer and more familiar than many emerging economies — and right now it’s up for grabs at bargain prices.