Mark Carney: is he really that good?

A look at the governor's record and where he's leaving Canada

Andrew Hepburn is a former hedge fund analyst. He’s a commodities bear and a keen observer of financial speculators. For Maclean’s he blogs about the economy and financial markets.

Such is the loftiness of his reputation (Central Bank Governor of the year, no less!), that the Brits would even consider poaching Carney from the Bank of Canada.

But just how justified is Mark Carney’s figurative stock price?

Is it based on what economists like to call “fundamentals,” i.e. real world factors, or inflated perceptions—have we been witnessing something of a Mark Carney bubble in the last few years?

I’m sorry to disappoint those in the Mark Carney fan club, but signs point to the latter. The odds are that history will not judge Carney as kindly as we are now.

As the governor prepares to leave office, Canada faces the possible bursting of two large asset bubbles, both of which could do serious harm to our economy.

First, and most obvious, is the housing bubble, along with the household debt that pumped it up. For now, housing prices have been cooling rather slowly, but should the bubble burst, it will have severe consequences for everything from residential construction to consumer spending.

Canadian house prices have been rising for over a decade (granted with a small correction during the financial crisis), and their ascent now rivals that of the U.S. in its bubble days. As CIBC noted, Canada’s “household debt-to-income ratio is now above the level seen at the eve of the big American crash.” 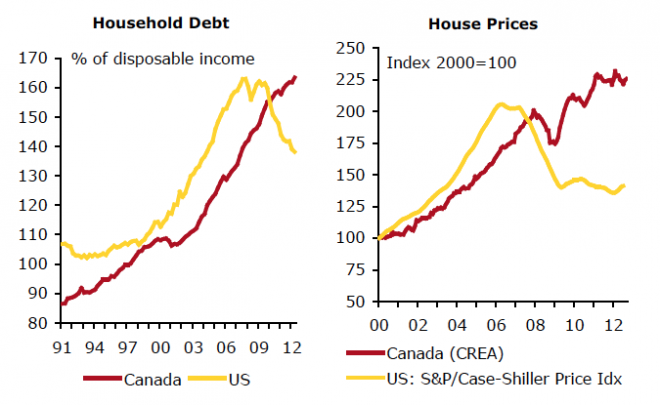 The second bubble Canada is faced with is a global commodities bubble. On that, too, we are on borrowed time. Resource prices have always gone through booms and busts, and the last ten years have been quite the boom, as Maclean’s pointed out last year:

These are no small bubbles: without housing and resource prices soaring anew after the 2008-2009 meltdown, it’s very difficult to believe that our economy would be as strong as it’s been recently. Put another way, the strength of the Canadian economy in the last few years might not have been the product of anything sustainable.

How much blame does Carney deserve for this?

In the case of housing, certainly a bit. His policy of ultra-low interest rates unquestionably made mortgages cheaper and encouraged many Canadians to borrow.

In fairness, though, Carney was between a rock and a hard place with interest rates. Keep them at rock-bottom and people will pile on debt, set them much higher and our currency—which has already become a bit of a safe haven after the financial crisis—soars even more, increasing the pain on exporters, who haven’t yet fully recovered from the Great Recession.

There’s also the matter of the Canada Mortgage and Housing Corporation’s balance sheet expansion and its impact on the housing market, a decision made not by Carney but the minister of finance. The CMHC has significantly augmented the value of mortgage insurance it issues, in effect allowing banks to grant new housing loans while the risk of default rests on the government’s shoulders.

Again, one can’t fault the governor for failing to tame the boom—they are global markets, after all.

But to the extent his job is to provide a sober look at economic trends and urge caution when exuberance abounds, Carney appeared to be doing the opposite. In early 2011 he all but uttered the most dangerous words in finance: This Time It’s Different. Thanks to the rise of China and India and their thirst for resources, the boom, he said last year, “ could go on for some time.”

Interestingly, others at the Bank of Canada, including Deputy Governor John Murray, have been warning that what goes up must come down.

Nearly seven years ago, as another famous central banker prepared to leave office, the Economist magazine mused: “Among ordinary Americans he enjoys almost rock-star status… Does he really deserve such uniform praise? And after the accolades have faded, what will economists conclude about his tenure?”

To be sure, Mark Carney is no Alan Greenspan. He has not ignored our housing bubble and our burgeoning private sector debt. And, unlike the former Fed chair, he does not have blind faith in markets to police themselves without proper regulation.

And yet, the similarities are inescapable: both central bank chiefs left in good times as trouble neared, and both enjoyed near-rock star popularity.

Maybe there’s something about being at the monetary levers in good times that causes reputations to exceed reality.

Maybe Mark Carney has been something of a bubble all along.