Larry Ellison built the fastest ship ever, but is Team Oracle at risk? 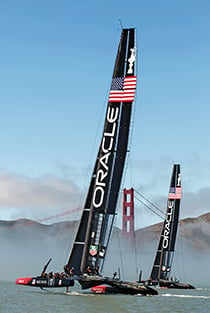 Larry Ellison knows all about danger. The billionaire playboy, founder of California software giant Oracle, broke his neck bodysurfing in heavy breakers along the Hawaiian coast. He stages mock dogfights over the Pacific, flying his collection of vintage fighter jets (although the U.S. government drew the line at letting him bring his Russian MiG-29, with a top speed of 2,400 km/h, into the country). And back when he was a world-champion ocean racer, he once sailed his high-tech “maxi-yacht” through a hurricane-force storm that whipped up 20-m waves.

In fact, that fateful 1998 Sydney-Hobart race— six people died, 24 boats were wrecked or abandoned, and the Australian Coast Guard had to pluck 55 sailors from the seas—was a life-changing experience. Trapped below deck, watching the hull bulge with the impact of every swell, Ellison vowed it would be his last open-water contest. “This is a dumb way to die,” he kept saying to himself. And when his yacht Sayonara crossed the line first, he counted himself lucky, rather than a winner. “It was a race for survival, not for victory, trophies or anything like that,” he would say later.

So it’s no small irony that the 68-year-old mogul—ranked by Forbes as the world’s fifth-richest man with a fortune of $43 billion—now stands accused of endangering his fellow sailors. As the guiding force and deep pockets behind Oracle Team USA, the defending America’s Cup champions, it was his prerogative to set the rules and format for this edition of the world’s best-known sailing race. Choosing the windy confines of San Francisco Bay, a natural amphitheatre for the fans, wasn’t controversial. But his radical design for the boats—22-m-long catamarans, propelled by rigid wing-like sails that tower 40 m in the air—surely has been. Incredibly lightweight and able to maximize the push from even the softest breeze, the vessels are the fastest to ever contest the 162-year-old competition. At full sail they literally fly, lifting more than a metre off the water and skimming along on foils attached to their rudder elevators and daggerboards, hitting speeds of up to 45 knots, or 80 km/h. But they’ve also proven to be exceptionally difficult to handle, even for seasoned pros, and susceptible to “pitchpoling”—burying the downwind hull under the waves and then flipping end over end. Team Oracle’s first AC72 boat capsized out near the Golden Gate Bridge last October, destroying the sail. None of its 11 crew members were injured, but the damage kept them off the water for months as a new craft was prepared. Then, in May, came a far more serious incident. The boat belonging to Artemis Racing, the Swedish “challenger of record” for the cup, dug its bow into the water and broke apart, with the hull folding over itself. Andrew “Bart” Simpson, a 36-year-old British sailor, who had won a gold medal in Star class at Beijing Olympics, and then a silver in home waters in 2012, was trapped underneath and drowned.

The fatality was not the first in America’s Cup history—a Spanish sailor died during training when he was hit by a piece of broken equipment in 1999, and two crew were killed in separate accidents back in 1903. But it has cast a considerable pall over the competition. The Artemis accident happened in relatively light winds and calm seas, sparking worries of what will happened over the breezier summer months as the contest unfolds. Organizers have responded with 37 changes to enhance race safety, including equipping crews with more martial-arts style body armour, high-visibility helmets and emergency underwater breathing devices. (Chase boats with rescue divers were already always close at hand.) Still, not everyone is satisfied. Emirates Team New Zealand and Italian challenger Luna Rossa are both contesting changes to the rudders that they say have nothing to do with safety, but have rather been hatched to hand Ellison’s team an advantage. (As defending champion, Oracle gets to skip the preliminary stages and won’t race until September.) And when the round robin competition officially kicked off this past weekend, only the Kiwi boat reported to the start, racing around the bay alone.

All in all it has been a nightmare beginning to Ellison’s dream of putting yacht racing back on the sporting map. Over its first decades the chase for the cup was front-page news, as British bluebloods and the descendents of the New World’s robber barons lavished their fortunes on ever bigger and faster boats. But American dominance—members of the New York Yacht Club held the trophy for 132 straight years—eventually became boring. And the last time the public really paid attention was in the 1980s, when an Australian challenger finally took the “Auld Mug” offshore, and Dennis Conner, a skipper from San Diego, undertook a campaign to repatriate it.

The 2013 battle, which runs through July and August, and culminates in a best-of-17 showdown between Oracle and the fastest challenger in September, had been calibrated for maximum exposure. Not only is it the most accessible race ever for fans—a 9,000-seat stadium has been built at San Francisco’s Pier 27, right at the finish line—it will be the first cup shown on network TV since 1992. The boats were specifically designed to guarantee quick and exciting tilts, where the lead can easily change hands—a departure from traditional yacht racing. And Ellison’s group hired Stan Honey, the man who invented football’s virtual first-down line and the Fox network’s glowing hockey puck, to jazz up the telecasts with graphics showing speed and wind direction.

But the enormous cost of the vessels—each team is spending around US$200 million—and the sputtering global economy caused many potential entrants to bail out. Instead of having 15 vying for the trophy, as organizers had promised the city, there are just four.

“I think they overreached,” says John Rousmaniere, the author of 29 sailing books, including a history of the America’s Cup. “And they’re admitting that.” The attempt to create the sailing equivalent of Formula One auto racing has largely failed to attract big-name corporate sponsors. Although he personally believes the sport remains safe, Rousmaniere thinks the push to make the races more exciting has added unnecessary risk. “This is a very, very large technical leap to put boats these sizes up on hydrofoils.”

Ellison can certainly afford the money. Oracle had $37 billion in revenue this past fiscal year, and he is by far its largest stockholder, with more than one billion shares. His 2012 pay packet of $96.2 million ranked him first among U.S. CEOs. The real question might be why a guy who can buy virtually anything he wants—like Lanai, the sixth-largest island in Hawaii, an unrivalled 500-piece collection of Japanese art and antiquities, or a 44-acre Silicon Valley compound, built in the style of a 16th-century Japanese castle, using wood pegs instead of nails—is so obsessed with a trophy that few others give a fig about.

Ellison tried, and failed, to capture the cup in 2003, and again in 2007, losing out both times to the team backed by Ernesto Bertarelli, a Swiss biotech billionaire. Asked after the second defeat whether it was worth spending $100 million to win the championship, Ellison famously replied that he didn’t know. “But I can tell you this, it certainly isn’t worth $100 million to lose the America’s Cup.”

In her new book, The Billionaire and the Mechanic, San Francisco journalist Julian Guthrie traces the Oracle founder’s quest, and outlines how he finally got things right. Bringing the same ruthlessness to bear on his hobby as he shows in business, he jettisoned underperforming team members and adopted cutting-edge technology, pushing the rules as far as he could go with a wing-sail trimaran. But the victory was more of a relief than catharsis. “The thrill was not losing again,” says Guthrie. “I think coming up with the winning formula was his high point.”

Ellison—given up as an infant by his single mother, raised by indifferent relatives, and a dropout from two universities—has always prided himself on exceeding others’ expectations. “He’s always one to look to the next great thing. That may be his greatest quality and his Achilles heel,” says Guthrie. This time it hasn’t been as much fun. Feeling hemmed in by having to deal with the onshore management and bureaucracy, rather than just the challenge on the water, the billionaire has become more reclusive than ever. The author says he has been “devastated” by Simpson’s death—although he has yet to express that publicly. (The official regrets came from Stephen Barclay, the CEO of the America’s Cup Event Authority.) And he’s been talking about scaling the boats back—next time. For despite all the controversy and trouble, Ellison remains fixated on victory.

“Winning is in his marrow,” says Guthrie. “He’s incapable of wanting to lose. Not even subconsciously.”