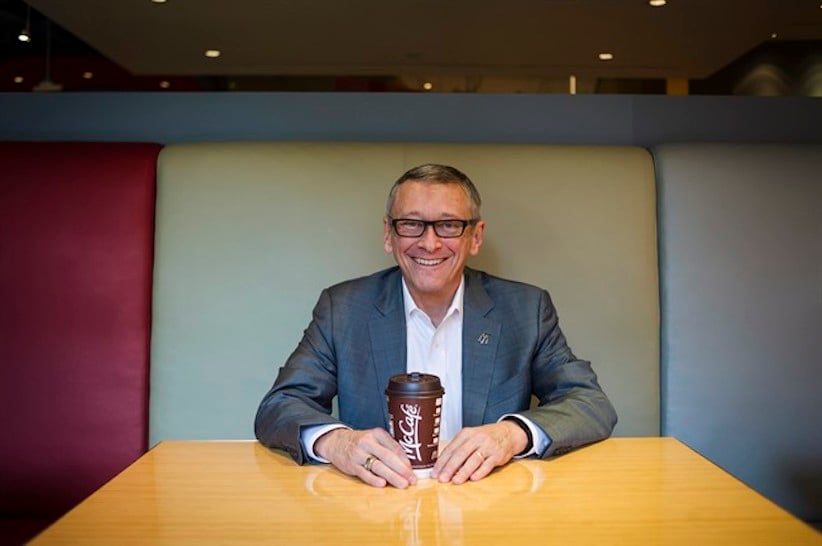 John Betts, CEO of McDonald’s Canada, poses for a portrait in McDonald’s Toronto headquarters on Tuesday, October 11, 2016. Next year, McDonald’s will mark 50 years in Canada, an important milestone for a company that continues to fight a reputation for unhealthy eating. THE CANADIAN PRESS/Christopher Katsarov

TORONTO – The head of McDonald’s Canada wants you to know one thing as it marks the golden anniversary of the Golden Arches in this country.

“I will tell you straight out that the reputation we have for food is absolutely unfair, unrealistic and a total … fill in the blank,” says president and CEO John Betts, slamming his hand on a table during a recent interview.

Next year, McDonald’s will mark 50 years in Canada, an important milestone for a company that continues to fight a reputation for unhealthy eating.

Since taking the helm of the Canadian operations eight years ago, Betts still finds himself trying to stop critics from using McDonald’s as an example of where not to eat. It’s an effort he sees as critical if the fast-food giant is to thrive at a time when Canadians are more nutrition-conscious.

“I’ve been eating this food for 50 years,” says Betts, whose trim frame belies his 64 years.

“You go to a McDonald’s in Canada … these are the people who eat McDonald’s food,” he continues, gesturing at employees at the company’s head office in Toronto.

The McDonald’s of today is a very different restaurant than the one that opened in Richmond, B.C., in 1967, the first outside the U.S.

Known for its signature Big Macs and shoestring french fries, McDonald’s seems to be constantly overhauling its menu in an effort to satisfy customers’ preferences for healthier and more local choices.

It has reduced sodium in nearly 50 of its food items, sourced all beef and chicken from Canada, and is aiming to remove antibiotics from the chicken it serves by the end of 2018.

Nutritional information is available online and in its restaurants, and beginning next year, McDonald’s and other restaurants with 20 or more locations in Ontario will be legally required to provide calorie counts on their menu boards.

McDonald’s wasn’t always so open to change. Prior to its pro-health push, the company was going through the equivalent of a mid-life crisis.

Betts says when he became CEO, McDonald’s was struggling to find its identity, with slowing sales and outdated locations as rivals began to eat the company’s lunch.

“We had started doing everything for ourselves, not paying attention to our guests,” he says. “We were becoming less relevant in the eyes of Canadians.”

It is difficult to gauge how much success has been made since. McDonald’s Canada, which operates separately from its U.S. parent, is a private company and does not make its financial information public.

In 2011, the company invested $1 billion to modernize its more than 1,400 locations, undergoing renovations that have seen the installation of fireplaces and flat-screen TVs, along with new decor and furniture.

Last year, it began adding self-service digital kiosks, table service and even poached people from the hospitality and airline sectors to work as dedicated greeters.

Such measures are intended to grab a bigger share of a growing pie.

From October 2015 until September of this year, Canadians spent approximately $25.8 billion at quick-service restaurants, up from $22.1 billion four years earlier, according to market research firm NPD Group.

Betts says the company’s future will depend on how successful it is by being everything to everyone. The McDonald’s of tomorrow will always rely on its classic menu of hamburgers, chicken sandwiches and french fries but healthier options like wraps, salads, and smoothies are also here to stay, he says.

Erik Thoresen, a principal at consultancy firm Technomic, says McDonald’s is the quintessential fast-food chain, an image it shouldn’t lose sight of as it continues its transformation.

“Ten years from now, we may be looking at fast food a lot differently than we look at it today, in terms of the share of the menu that is indulgent versus better for you or healthy,” says Thoresen.

“In a lot of ways, McDonald’s is helping define the future image of what the fast food industry is.”