'Those of you know me know how I hate losing money,' chief executive says 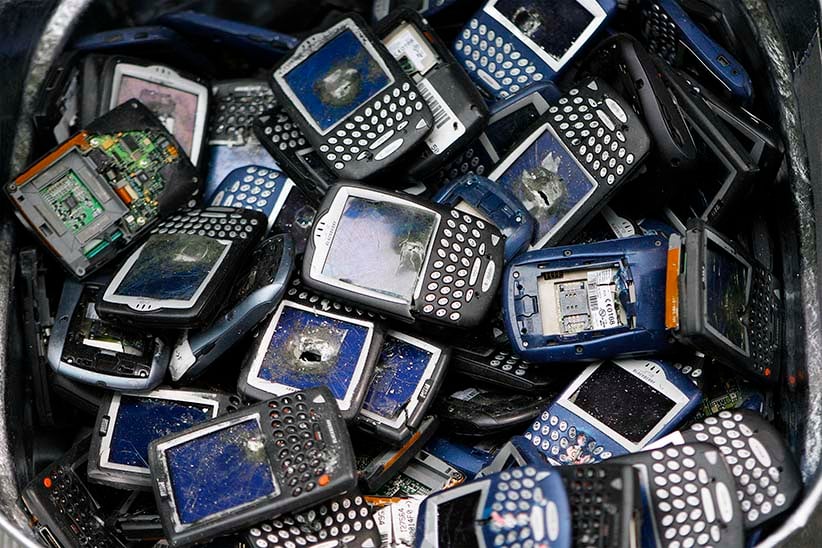 Trashed Blackberry phones sit in a bucket during the NBC Today Show in New York April 21, 2008. The phones were to be used by students in an art piece and then recycled for Green Week. (Lucas Jackson/Reuters)

WATERLOO, Ont. — BlackBerry Ltd. (TSX:BB) delivered another loss in the first quarter as the company struggled to sell its smartphones, but investors appeared pleased with some of the headway made with its turnaround effort.

The Waterloo, Ont.-based company’s stock was ahead nine per cent to US$10.04 in pre-market trading in New York, as BlackBerry managed to grow its software licensing revenue by 150 per cent.

That appeared to be a bright spot in an earnings report which showed other areas of weakness.

BlackBerry posted an adjusted loss of US$28 million or five cents per share, which compared with expectations of a three-cent per share loss, according to a survey by Thomson Reuters.

Revenues of $658 million were also softer than the $679 million analysts anticipated. Total revenue was down from US$966 million a year earlier, but about steady with the previous quarter ended Feb. 28.

Growth of software revenues to $137 million — about one-fifth of the total in the quarter ended May 30 — appeared to overshadow some of the problems with BlackBerry’s hardware business.

Missing from the initial financial results was much insight into how the recent launches of the BlackBerry Passport and Classic phones have fared when it came to sales.

The company, which only recognizes revenue on devices when they’re sold to customers, booked revenue on 1.1 million BlackBerry smartphones during the period, a steep drop from the 2.6 million phones sold a year earlier.

Smartphone revenue fell to about $263 million from $379 million a year ago.

In a separate announcement, BlackBerry said it will receive an unspecified licence fee from network equipment manufacturer Cisco (NASDAQ:CSCO) for patents, as part of a long-term agreement. The company did not offer any further details.

Chief executive John Chen has been focused on transitioning the company away falling handset revenues and towards sales in its software business.

“Those of you know me know how I hate losing money,” Chen told analysts on the company’s first-quarter conference call.

“I believe these investments are prudent as we transition to growing a bigger software business,” he added later.

The length of the turnaround has tested the patience of some investors, and BlackBerry’s share price has fallen about 11 per cent on the TSX since the start of the year. The stock closed Monday at C$11.32 on the Toronto market, down from $12.74 on Jan. 2.

BlackBerry (TSX:BB) is also scheduled to hold its annual meeting on Tuesday morning in Waterloo.