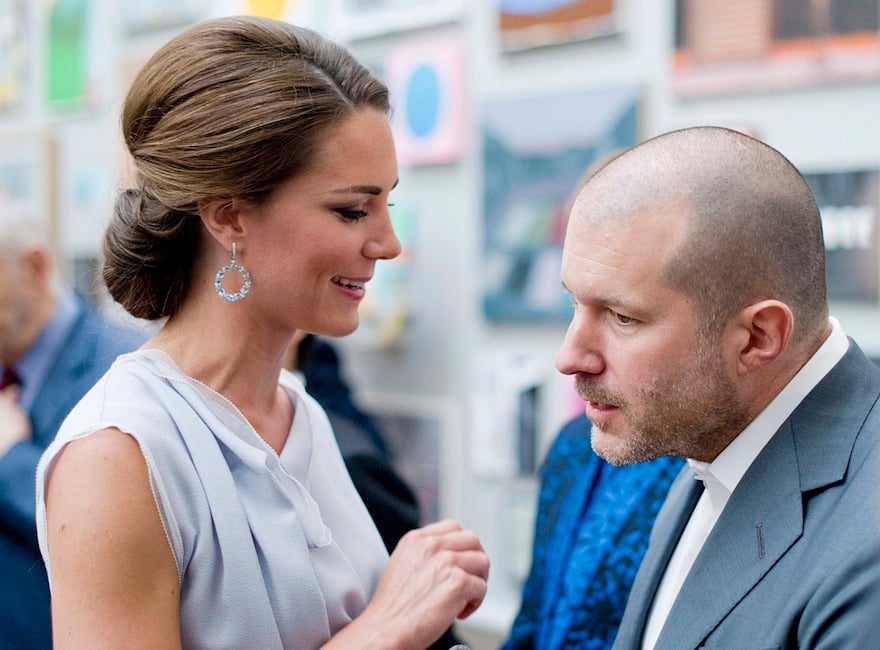 The Duchess of Cambridge talks with designer Jonathan Ive, the senior vice-president of Industrial Design at Apple, at the Royal Academy of Arts in London for the U.K. creative industries reception hosted by the British government supported by the Founders Forum, on, July 30, 2012 (Geoff Pugh/AP)

With the exception of the late Steve Jobs, few have had a bigger impact on Apple Inc.’s success than soft-spoken design guru Jony Ive. After all, it was Ive’s colourful, bubbly iMac design that helped Jobs resurrect Apple back in the late 1990s. As the story goes, Jobs “discovered” Ive toiling away at Apple’s design studio after returning to the computer company he helped found in the mid-1970s. Since then, Ive’s sleek, modern creations—from the iPod to the iPhone— have put Apple at the forefront of industrial design and made it the world’s most valuable company.

So it’s not surprising that Apple recently promoted Ive to the newly created executive role of chief design officer. In addition to a likely pay bump, the new job title promises to free Ive from the managerial duties that came with being a senior vice-president (and that he apparently didn’t much care for), and will give him more time to actually work on designing things—everything from Apple’s products to the retail stores they’re sold in. (He has apparently also designed the desks for Apple’s new spaceship-like headquarters.) The promotion, in other words, reinforces Ive’s central importance to Apple’s continued success.

At the same time, however, it also feels like the sort of job given to a company’s elder statesman—someone who is slowly backing away from day-to-day operations, but who has agreed to stay involved while others are being groomed to take over. To wit, Richard Howarth is now Apple’s head of industrial design while Alan Dye is in charge of user interface.

It’s also worth noting that Ive has previously expressed interest in moving back to England, where he and his wife would like to raise their children. A recent article in the Telegraph, which was allowed to break the news of Ive’s promotion on May 26—a U.S. holiday that meant stock markets were closed—also noted that Ive “will travel more” in his new role, a phrase some are reading as code for moving back overseas.

That said, there are no signs that Ive is planning to part with Apple any time soon. But, at age 48, he clearly has more than enough money and no shortage of attractive options on the table. Perhaps his promotion is simply a way to keep him around as long as possible by giving him whatever he asks for. If so, it’s a wise move on Apple’s part.

Under CEO Tim Cook, Apple has proven it can live without Jobs, who died of cancer a little more than four years ago. The question investors should be asking themselves this week is: Can Apple live without Ive, too?