Obama as you've never seen him before

With the U.S. election drawing to a close today (barring any recounts, that is), here’s a look at four years of Barack Obama in numbers. The U.S. economy sure changed a lot since January 2009—but not necessarily the way you’d expect: 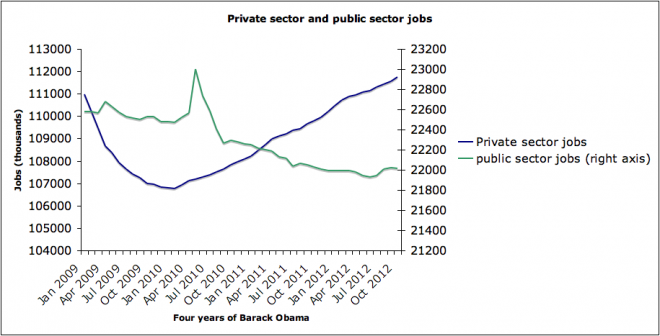 I owe a tip o’ the hat to Sudeep Reddy, over at the Wall Street Journal’s Real Time Economics for pointing this out. Compared to January 2009, private-sector jobs have increased while the ranks of government employees have shrunk considerably. (Note: that bump in government jobs around May of 2010 is due to the 550,000-some temporary workers the federal government hired for the 2010 Census.) And interestingly, as Joe Weisenthal pointed out on Business Insider, government payrolls grew during the first four years of the Bush administration.

Can’t quite call Obama the champion of Big Government based on these employment numbers, eh? 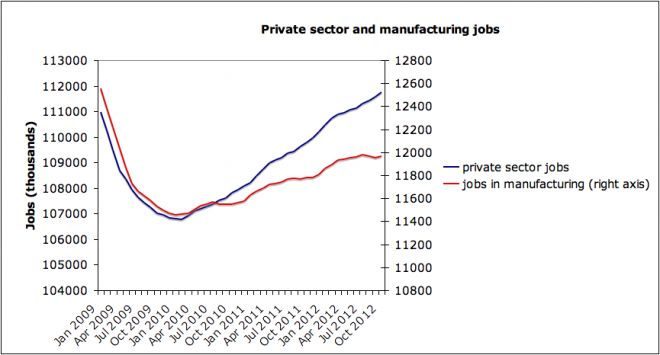 Another surprising detail from on the jobs front: within the private sector, manufacturing jobs have underperformed. So much for having a president close to the unions. 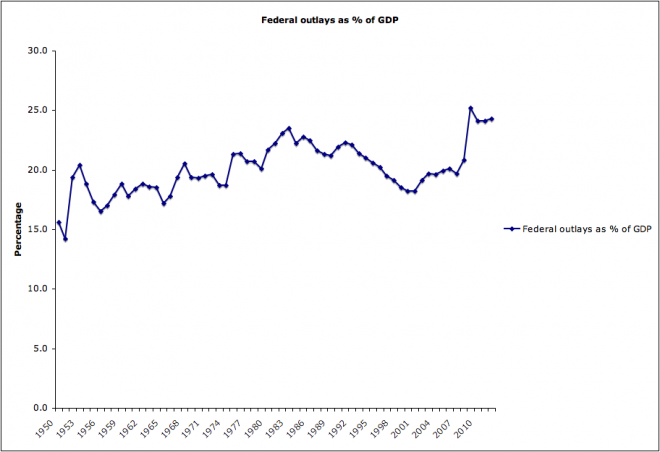 *Source: Office of Management and Budget.

No one can deny that government spending blew up when Obama took office. Federal expenditures (outlays) rose to a staggering 25.2 per cent of GDP during the first year of his presidency, a level not seen since 1945. And yet, this chart offers up another couple of interesting details: first, note how it was George W. Bush who reversed the trend of declining federal spending between 2001 and 2008. Second, unsurprisingly, many of the peaks in this chart correspond to periods of negative growth, including the second-highest one, which coincides with the 1982 recession under Reagan. As the American Enterprise Institute’s Michael Strain pointed out, under that Republican administration, federal outlays reached 23.5 per cent of GDP, less than two percentage points below the record set by the Obama White House during the worst economic crisis in postwar history. 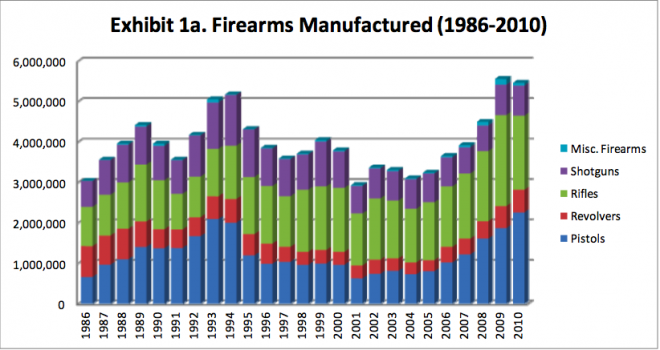 *Source: data and chart from the Bureau of Alcohol, Tobacco, Firearms and Explosives.

As an analysis by the Associated Press pointed out, the gun industry thrived under the supposedly “gun-hating” Obama administration. Concerns about a coming crack-down on gun owners’ rights after the election of a Democratic president calling for sweeping change might have been what drove Americans to stock up on firearms like there was no tomorrow, suggests Businessweek. In this chart, you can see a considerable jump in firearms manufactured in 2009 and 2010—the trend held up in 2011, according to the AP.

The NRA should be careful what it wishes for.