One man's quest to save the seal industry 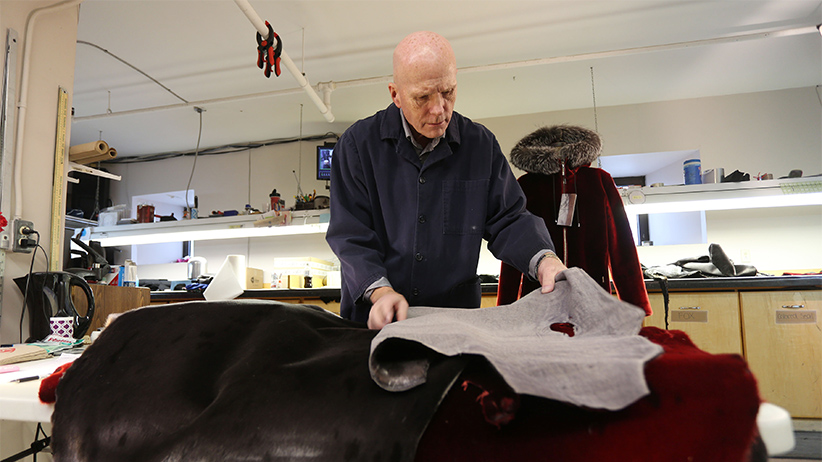 Bernie Halloran in his store, Always in Vogue, in St. John’s, NL on Friday, January 27 2017. (Photograph by Paul Daly)

Bernie Halloran credits Danny Williams for introducing him to Newfoundland and Labrador’s controversial seal trade. As the story goes, the feisty future premier wandered into the Nova Scotia furrier where Halloran worked in the early 1980s. Impressed, Williams told the store’s owners they would be crazy not to expand to Newfoundland. So, with his help, they did—and for the first 20-odd years the move paid off handsomely. “That’s what Danny does,” says Halloran, who now runs his international seal empire, such as it is, from a store called Always in Vogue in downtown St. John’s. “He sees things and just sort of puts them together.”

What Williams failed to envision, however, was the impact anti-sealing campaigns—armed with celebrities like Paul McCartney and gut-wrenching videos of young seals being clubbed—would ultimately have on the industry. The final blow came in 2009 when the European Union placed a near total ban on the import of seal products, with the exception of those derived from Indigenous hunts. The U.S., meanwhile, has had a ban in place since the early 1970s as part of the Marine Mammal Protection Act. In the absence of a viable market, seal pelt prices plummeted, processors closed and local sealers stopped heading out onto the ice. By 2015, the number of harp seals harvested fell to just 35,000, down more than 90 per cent from nine years earlier.

Yet, despite the increasingly gloomy prospects, Halloran refused to pack it in. Instead, he spent the next several years trying to revive the beleaguered industry, which he calls “the most bullied on the planet.” His solution: sell seal to China. So far, he’s opened a small seal goods factory in Guangzhou and a swanky mall store in Shenyang. Closer to home, he’s also invested in a seal processing plant on Newfoundland’s Baie Verte peninsula.

There’s just one catch: wealthy Chinese consumers have yet to warm up to sealskin, never mind seal meat (Omega 3-rich seal oil, on the other hand, has a growing following because of its perceived health benefits). Halloran, though, is unfazed, spotting untapped opportunity wherever he looks. “It’s either going to grow,” Halloran says of the centuries-old industry, “or it’s going to fold.” He may well be the Canadian commercial sealer’s last, best hope.

The origins of Halloran’s China project can be traced to a 2012 tour of a local Ugg factory. He recalls marvelling at the size of the operation, which produced millions of pairs of the floppy sheepskin boots a year. As is the case with most North American entrepreneurs who visit the country of 1.3 billion, it wasn’t long before a light bulb flickered on. If Always in Vogue could capture even a tiny fraction of the huge Chinese luxury goods market, he reasoned, Newfoundland and Labrador’s sealing industry would be back in business.

Always in Vogue opened its Chinese factory a year later. It employs 10 workers who make sealskin bags, slippers and other small items. Then, in 2015, Halloran opened a retail store inside a Shenyang shopping mall. It’s been slow going ever since—so much so that his Chinese business partner walked away from the venture last year. “The people who buy the products love it,” Halloran says. “But it’s like trying to sell ketchup when everyone’s used to eating mayonnaise.”

Back in Newfoundland and Labrador, meanwhile, Halloran formed a company called PhocaLux International and purchased a seal processing plant in the tiny community of Fleur de Lys. The idea, says Halloran, is to create a sustainable, long-term business that uses every part of the seal: fur, oil and meat. It’s also an effort to head-off any potential competition if his China gambit takes off. “I didn’t want to have a really good idea and then somebody comes along, buys all the seal skins and puts me out of business,” he says.

Halloran, who once eyed the same Port Union plant, says the investors are working with Kendall Flood, a former business partner. A message left on the answering machine of Flood’s company, apparently headquartered in a ranch-style in house in a tony St. John’s suburb, was not returned. Shelly Blackmore, a local councillor who handles economic development for the Port Union area, declined to discuss the Chinese investors’ interest in the shrimp plant, which formerly belonged to Ocean Choice International. “We have nothing further on this development at this time,” Blackmore wrote in an email, adding that local officials have tried for years to lure more jobs to the community.

Anti-sealing advocates, not surprisingly, aren’t thrilled with the renewed interest in turning wild seals into consumer products. They argue the hunt is cruel because it takes place in an uncontrolled environment—on open ice—where it’s difficult to kill humanely (sealers generally use either a rifle or hakapik, a long club with a hook on one end). “If it weren’t for subsidies from the federal and provincial governments, this industry would have just died a natural death,” says Sheryl Fink, a director at the Canadian branch of the International Fund for Animal Welfare. “I’m frankly surprised anyone would consider killing seals for their fur as an industry of the future.”

Sealers, on the other hand, argue they’ve been unfairly targeted because of the visibility of the hunt. Unlike slaughterhouses that dispatch cattle and chickens behind closed doors, they must carry out their business in plain view of anyone with a boat or helicopter. They also spill the blood of their prey—a relatively cute one at that—on a canvas of clean, white ice, making for high-impact photos and video. “Killing an animal isn’t pretty,” Halloran says, adding that the seal population off the coast of Newfoundland and Labrador is healthy, the hunt is closely monitored and rules prohibit the killing of newborn seal pups, also known as whitecoats. “But don’t go into the Keg and order a nice steak and then walk out and tell me I shouldn’t be selling seal fur.”

As for negative public attitudes about the seal hunt, Halloran is convinced they are beginning to change. As evidence, he points to the short-lived hubbub over a Vancouver restaurant that put a seal ragu on its menu. Instead of capitulating to threats of violence, the proprietor hired security guards and pointed out that seal was probably a more sustainable ingredient than most of the seafood Canadians eat—a moment Halloran called “music to my ears.” Similarly, two years ago, Don Cherry was forced to walk back an on-air remark he made about sidekick Ron MacLean’s decision to sample a seal burger at a popular St. John’s restaurant. Cherry called Maclean “a savage, a barbarian” and got an earful on Twitter, particularly from Indigenous Canadians for whom seal hunting is an important cultural tradition.

Of course, it takes more than a few defiant restauranteurs and offended Twitter users to save an entire industry. Though last year’s hunt brought in about 65,000 harp seals, almost double the year before, that’s still a tiny fraction of the total allowable catch of 400,000. Moreover, sealing accounted for as little as $2 million in Canadian exports in 2010, the last year for which figures are available. Anti-sealing groups claim that’s roughly the same amount federal and provincial governments spend on monitoring the annual hunt, making the industry a net money loser.

Halloran, for his part, isn’t giving up on his seal ambitions anytime soon. He’s convinced that people will come around eventually—that it’s only a matter of time before sealing becomes a growth industry again. “Crazy or not crazy, I feel like this whole seal thing is keeping me alive,” he says, citing a run-in with pancreatic cancer a few years ago that left him feeling like he has nothing to lose. “I want to play a part in fixing the injustice that’s been done over the years.”