Paul Godfrey: 'Ultimately the buck stops with me'

Postmedia's CEO on debt, woes and letting go of an 'unprofitable' business model 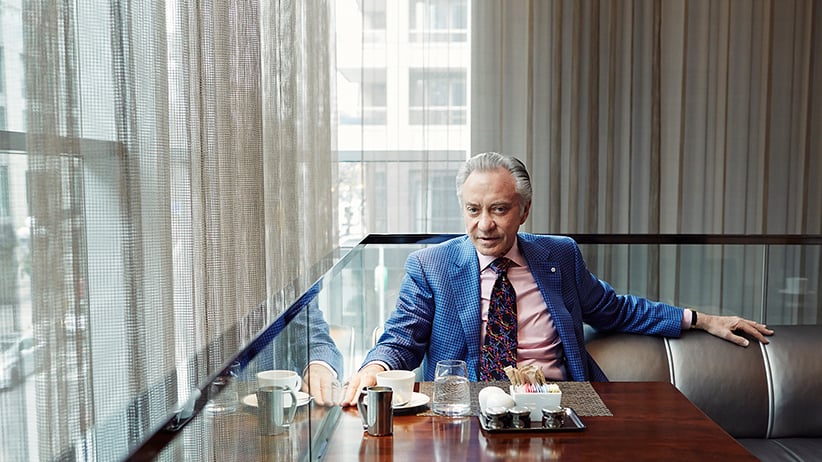 TORONTO — Paul Godfrey doesn’t need to be prompted to talk about the troubled state of Canada’s media industry in the midst of a steady stream of bleak news — the Postmedia CEO raises the topic himself.

Just a few minutes after stepping into his office at the company’s headquarters in downtown Toronto, Godfrey is already expounding on how he sees an industry in strife.

“There’s no doubt the business models for newspapers, magazines and conventional television are all being disrupted,” said the 77-year-old executive, stating what’s become painfully obvious for Canadian news outlets.

Godfrey points to Google and Facebook as behemoth competitors who are luring away longtime advertisers by selling audience reach and metrics that traditional media companies simply cannot offer.

Canada’s media industry is indeed facing widespread turmoil — hundreds of pink slips have been handed out already this year, and two daily newspapers are closing permanently — but Postmedia is sitting with its own unique timebomb of financial constraints.

The country’s largest newspaper chain, owner of the National Post and such city dailies as the Ottawa Citizen and Vancouver Sun, is operating under debt obligations that come due during the next few years at astronomical amounts.

This year, Postmedia owes $25.9 million of long-term debt, and that figure jumps to a stunning $302.7-million in 2017, according to its annual report filed last November.

If Postmedia is unable to repay those debts, or find a solution to refinance what it owes, the company is almost certain to wind up in bankruptcy.

Godfrey stops short of trying predict Postmedia’s future, saying that any suggestion its days are numbered is “a guess.” But he clearly identifies the potential pitfalls.

“We have bills to pay called mortgages — first-lien and second-lien notes,” he said.

“When you own a house with two mortgages, you’re still bringing in income every week, but if your revenue starts to fall and you can’t pay off your mortgages, what are you going to do? You’re going to keep cutting your costs or someone takes your home away from you,” he added.

Godfrey then explains one of the biggest challenges in repaying those debts.

“What’s really hurtful to us (is the) second-lien notes are all in U.S. funds,” he said. “With the Canadian dollar falling the way it’s falling, that’s almost like a noose around your neck.”

Others share those concerns, including Moody’s Investors Service, which last week further downgraded its ratings on the company over its refinancing prospects.

Some analysts find it surprising Postmedia’s newspapers have survived this long after sitting in limbo during the Canwest bankruptcy proceedings before they were bought in 2010 by an investment group backed by New York hedge fund Golden Tree Asset Management for $1.1 billion.

The acquisition was contested by some, including the Communications, Energy and Paperworkers Union of Canada, which urged the federal government to reconsider the consolidation of so many newspapers, especially under a U.S. participant.

Golden Tree has remained a sticking point for media critics, with some suggesting the firm is sapping Postmedia business — particularly its valuable real estate assets — for as much as it can get.

“Golden Tree is an equity player, not a debt player,” he said.

“If it wasn’t for Golden Tree Asset Management, this chain may not be in existence today because there were no Canadians who stepped up to buy (the papers) …. People should be happy that at least somebody (bought the newspapers) and kept a lot of people employed.”

In the coming months, Godfrey will reshape Postmedia even further in preparation for lender negotiations he hopes will lead to refinancing the first-lien notes by August 2017.

The latest round of cuts are “paramount,” he said, to making Postmedia’s business model attractive for investors who hold the keys to financial relief.

The company recently announced it was merging newsrooms and cutting about 90 jobs as part of a large-scale effort to save $80 million by the middle of next year. The newsroom cuts only get the company “part way” to the goal, Godfrey said.

Beyond its journalists, he said executives are considering many avenues of change. Those include whether money can be saved in how the newspapers are laid out each night, whether printing the paper half an hour earlier would be cheaper and if there’s a way to have fewer delivery people on the streets each morning.

“We’re going to do our very best adjusting the cost base so that people who are potential investors in the debt see we are doing everything we can to be able to repay the debt,” he said.

“Is it a pleasant thing to do? Obviously it’s the most painful thing to do to — disrupt your own company. You know you’re hurting certain people’s lives.”

At the same time, executives are on the hunt to create new revenue streams.

One of them took shape on Monday when Postmedia announced a three-year partnership with Mogo Finance Technology Inc. that will see it pocket a portion of revenues generated by the short-term loan provider.

The partnership is unconventional but comes with a solid upside —  if Mogo can find customers in Postmedia’s readership, then both companies will reap the rewards.

Godfrey said the Mogo agreement is a snapshot of what’s to come.

“This one area seemed to be a natural,” he said. “We have two or three others we are working on.”

Postmedia has also abandoned ventures it found didn’t deliver results —including an evening tablet edition once trumpeted as a major area of growth for the company.

Godfrey said Postmedia bailed on the tablet experiment when it was clear it wasn’t going to deliver a profit.

He suggested the Toronto Star — which has invested millions of dollars on its Star Touch tablet platform —reconsider its devotion to the tablet as well.

“They’re way off base and they spent a fortune,” he said, pointing to mobile phones as the smartest bet for media companies.

“Our philosophy here is fail fast. I don’t think they recognize that. You tried it, everybody’s got to experiment, but they keep spending and spending like crazy on it.”

Godfrey is confident owners of the Star will eventually reach the same conclusion his company did: a tablet-specific business model isn’t profitable.

“They’re going to realize it sooner or later,” he said.

Torstar has said the Star Touch has been downloaded more than 100,000 times, though it also laid off 10 members of the tablet team earlier this month.

Some media critics have called on the federal government to step in and give the country’s newspapers financial assistance that could get them through the next few years.

Godfrey said he’s not interested in asking for the government’s help at this point.

“As far as I’m concerned I’m running a business right now,” he said. “The preferential route is to explore all options we can do by ourselves first. I haven’t even thought about that.”

In the meantime, the CEO is prepared to endure criticism from outsiders who say his decision repurpose stories for different outlets and merge newsrooms in four cities where it owns two newspapers will affect quality.

“Ultimately the buck stops with me, and I recognize that,” he said.

“Four months from now, you’ve got every right to dump all over me if the product has decayed. But I’ll tell you something, if they haven’t decayed, I don’t want to hear from them.”